The Greater Bilby has not been seen in the wild in NSW for more than a century. Deborah Smith reports on an ambitious comeback plan. 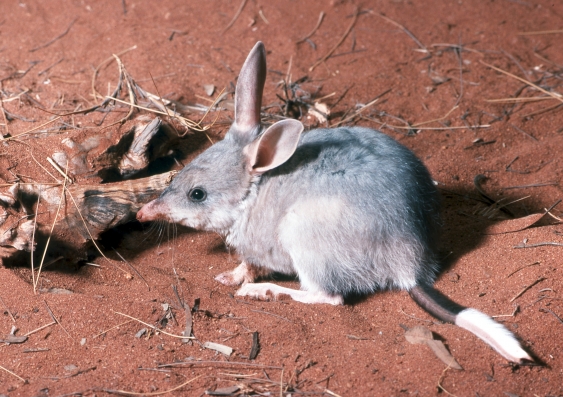 The Greater Bilby will be the first of seven locally extinct native mammals to be reintroduced into north-western NSW. Photo: Howard Hughes/Australian Museum

With their long, pink noses and pointy ears, bilbies are among the most delicate of the desert mammals that can survive in the harsh Australian outback. And, sadly, they make a dainty morsel for feral cats and foxes.

“They are very pretty animals, but very vulnerable. It is almost as if they have ‘eat me’ written across their foreheads,” says UNSW scientist Professor Richard Kingsford.

The nationally threatened species has not been seen in the wild in NSW for more than a century, mainly due to this predation by introduced species, as well as habitat loss.

But now bilbies are on their way back.

The Greater Bilby will be the first of seven locally extinct native mammals to be reintroduced into Sturt National Park near Tibooburra, in the north-west corner of the state, as part of the Wild Deserts project that Kingsford leads.

Initially, about 10 bilbies will undergo a breeding program in a 110-hectare sanctuary at Taronga Western Plains Zoo in Dubbo. In 2019, 30 or so of these bilbies will be transported to Sturt and released into two 20-square-kilometre, fenced exclosures from which every single cat and fox has been removed.

“If just one cat remains inside the exclosures, the bilbies will not survive,” says Kingsford, Director of the UNSW Centre for Ecosystem Science.

The 10-year initiative, launched by NSW Environment Minister Gabrielle Upton in September, is a partnership between UNSW and Ecological Horizons, and the NSW Office of Environment and Heritage, in collaboration with Taronga Conservation Society Australia.

As part of the research at Sturt, Moseby will test a new device for killing feral cats, called a grooming trap. It has sensors and a camera that detect the shape of cats lured to the device. Once they are close, it fires a toxic gel at them.

“Cats are instinctive groomers and they ingest the poison this way. It has the advantage of avoiding the need to lay baits in the environment,” says Moseby.

While cats and foxes will have been removed, the two exclosures will not be predator-free havens: cat-sized Western Quolls and the ferocious Crest-tailed Mulgaras also eat bilbies and other small mammals.

The Wild Deserts project is about much more than returning mammals to the park. It is about restoring the degraded desert ecosystem with the help of the animals that used to be there.

“These native predators will be needed to stop the bilbies and other species breeding so quickly that they eat themselves out of house and home and starve,” says Kingsford.

The seven species will be introduced into the two exclosures in different numbers and orders to determine if this affects the outcome.

The scientists will also study the impact the mammals have on the whole desert ecosystem, including the soil, vegetation and presence of invertebrates and small rodents (see box).

“The Wild Deserts project is about much more than returning mammals to the park. It is about restoring the degraded desert ecosystem with the help of the animals that used to be there,” says Kingsford.

Two UNSW scientists, Reece Pedler and Dr Rebecca West, have recently moved to a homestead in the park as project coordinator and project ecologist respectively and will oversee logistics including the construction of the fences and helping to conduct the research. 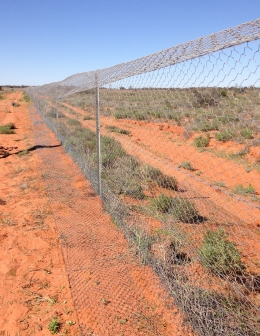 The remote area, which experiences extreme heat in summer, is renowned for its red sand dunes dotted with vegetation including mulga trees, sticky hop bush and sandhill wattle. “It’s a beautiful area. Very peaceful. And there is an incredible diversity of bird species,” says West.

Extensive consultations have been conducted with traditional Aboriginal owners of the land. “An important part of the environmental review has been to identify any sites of cultural or archaeological significance, such as areas where stone tools used to be made,” says Pedler. “This has informed decisions about where the fence will be positioned.”

The 1.8-metre-high barrier will have an overhanging floppy top so that cats cannot climb over it, as well as buried netting at the base so rabbits and foxes cannot dig under it.

If all goes well, the native mammals will be introduced into a third, 100-square-kilometre training area that contains a small number of cats and foxes, to educate them about their enemies.

West and Moseby’s recent research with bettongs has shown if prey-naïve animals are exposed to small numbers of predators, they can learn avoidance behaviours, such as increased wariness when feeding.

The aim of the project is to see all seven locally extinct species eventually reintroduced into the wild, outside the protected areas, where they can once again roam the desert areas of NSW and restore the landscape. 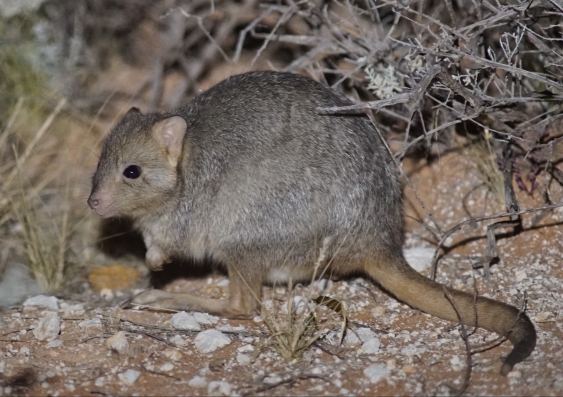 Australia’s Burrowing Bettongs (above) play a vital role as ecosystem engineers in the arid zone, improving soil health by mixing in water and organic matter as they dig their burrows.

“Our recent research also shows that small mammals including bettongs are much bigger consumers of plant seeds than had been realised, which means their loss due to predation has likely caused significant changes to vegetation in outback Australia and contributed to the rapid spread of woody weed shrubs.

“This new knowledge reinforces the importance of rewilding projects such as Wild Deserts for restoring the environment.”

Letnic and his team’s recent study – published in the journal Functional Ecology – was conducted in central Australia at two desert sites where small native mammals have been re-introduced into predator-free exclosures: the Arid Recovery Reserve in South Australia and the Scotia Wildlife Sanctuary in south-western NSW.

“We conducted a cafeteria experiment, where we set out trays of native shrub seeds that only mammals or ants could access,” says study first author and UNSW Science PhD candidate Charlotte Mills.

“We compared seed removal rates in re-wilded areas with those outside the predator-proof fences, where few native mammals live. Up to eight times more seed was taken from the trays in the re-wilded areas.”

Photographs and other evidence such as footprints and droppings confirmed that mammals were active around the seed trays. Surveys also revealed there were fewer woody shrub seedlings in re-wilded areas compared with areas outside the exclosures.

“These results overturn the long-standing view that ants are the most important species when it comes to eating and removing seeds in the Australian desert,” says Letnic.

“It shows that mammals are important predators of seeds and their re-introduction has helped restore the landscape and helped prevent the encroachment of woody shrubs.”