A group of students, staff and researchers are applying some creative thinking to preserve iconic fig trees on UNSW Sydney’s Kensington campus. 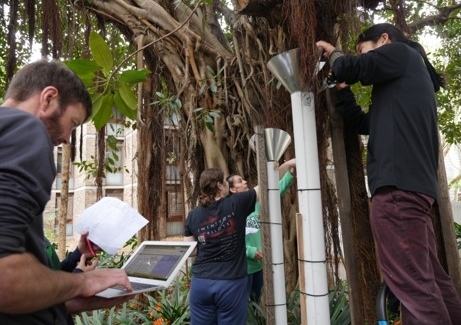 UNSW students and staff gather to analyse results of their botanical research into the campus fig trees.

University students, staff and researchers have found a possible solution to protecting the heritage listed fig trees on the campus.

Visitors to the University in the past year might have noticed a curious cluster of white plastic pipes at the base of some fig trees on campus.  The pipes are the work of the UNSW community to encourage the growth of the ‘aerial’ roots of fig trees – thin roots which grow down from branches and ultimately reach the ground to become new trunks.

The Moreton Bay and Port Jackson Fig trees at Kensington – estimated to be older than the University at up to 120 years old – are more than 30 metres tall, with a canopy stretching more than 35 metres.

The trees line one of the lower campus roads, forming a leafy backdrop to University landmarks such as Fig Tree Lane and Fig Tree Theatre. 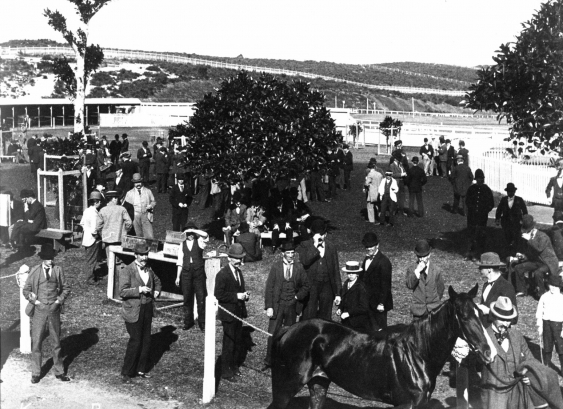 The fig trees have been part of the grounds since it was a racecourse. This photo was taken in the 1890s. Photo: UNSW Archives

UNSW Estate Management had noticed that the large branches appeared to be developing faults, putting them at risk of falling.

In a bid to stop further deterioration, workers installed slings and harnesses around some of the branches, much like protection used for a broken arm.

Then, a year ago, Grounds Manager Mark Clark approached UNSW plant ecologist Professor Angela Moles to see if she could help.

An expert report suggested a solution was to target the trees’ aerial roots, their natural built-in support system, which grow down from branches and anchor in the soil. Over five to 10 years they strengthen to become new trunks that help prop up the branches.

“I thought it was a great opportunity for collaboration with the School of Biological, Earth and Environmental Sciences to set up a trial to see the best method to assist the ongoing maintenance of the fig tree population on campus,” Mr Clark said.

“We wanted a plan to nurture these ‘veteran’ trees through their twilight years.”

Professor Moles said it was the perfect opportunity for her second-year flowering-plants biology class to gain fieldwork experience and see how scientific method operated.

With some branches 30 metres above the ground, encouraging the aerial roots to grow and reach the ground wasn’t going to be easy.

“We looked into how we can do this – and the thing is that there is almost nothing in scientific literature on encouraging that,” Professor Moles said.

The main idea was to make the trees feel at home by creating tropical rainforest-like conditions of increased humidity and moisture, which would presumably encourage root growth.

Students encased the aerial roots in PVC pipes to give a one-way highway to the ground.

They filled the pipes with one of three ‘treatments’: potting mix to increase intake of nutrients; sphagnum moss to retain moisture; or swaddling the roots in sphagnum moss with an additional funnel to increase rain capture.

The control group of aerial roots was left to grow naturally. 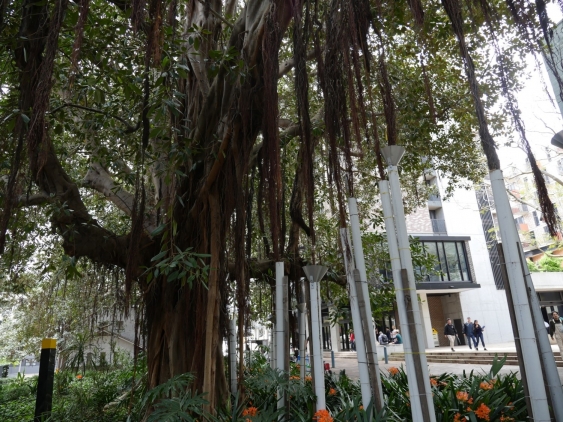 The fig tree with the experiment installed. You can see examples of the aerial roots hanging off the branches not encased in PVC pipes.

Professor Moles, Mr Clark and the current flowering plants class returned a year later with cherry pickers and secateurs to peel back the PVC pipes and reveal the results.

The students measured the increased length of the roots and total root diameter at the merging point with the soil, finding that the roots had responded wonderfully to all three treatments. 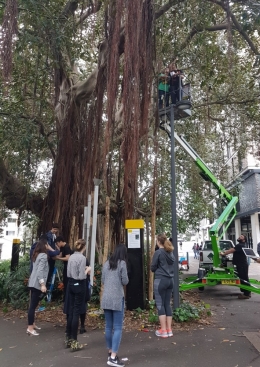 Not only had the aerial roots reached the ground, they had intertwined and anchored into the soil to form a firm foundation.

Interestingly, the root length of the control group remained unchanged.

“So many undergraduate practical classes involve students running through exercises for which the answers are already known,” Professor Moles said.

“It was awesome being able to break out of that mould and use a class exercise to address a real-world problem and discover something totally new.”

Biology student Suzanna Gooley was part of the original class that set up the experiment and returned to the site.

“It’s really exciting, as it suggests that maybe our idea was correct and it was actually the humidity and the water that helps the roots reach the ground,” said Ms Gooley, who is in her final year of study.

“Some of the roots were two metres off reaching the ground and have grown to the soil in the 12 months since, so that’s absolutely amazing. Especially when comparing to ones which have had no treatment.”

The experiment gave Ms Gooley a new-found appreciation for the Moreton Bay and Port Jackson Fig trees, which have the botanical names Ficus macrophylla and Ficus rubiginosa.

“Honestly, I always thought the fig trees were nice but I never thought too much about them,” Ms Gooley said.

“Now I feel like I know these trees better and I appreciate the amount of effort that goes into keeping them on campus and keeping them safe.”

The class will submit the results to a peer-reviewed journal. 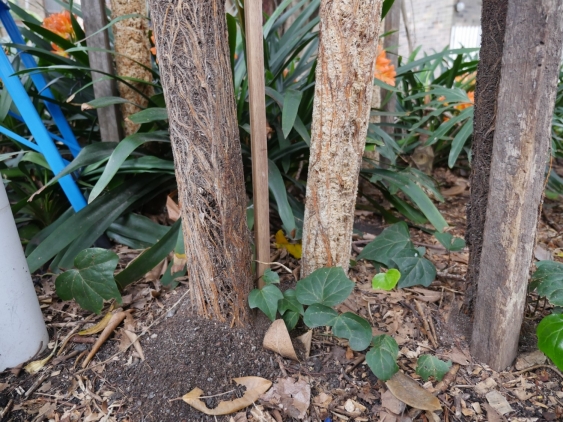 A year since the experiment began, the fig tree aerial roots successfully grew and anchored firmly into the ground, when ‘treated’ with potting mix (left) and spaghnum moss (right).