Photographer Nick Cubbin has captured the often-overlooked beauty of waterbird feathers for a project that aims to plot the movements of Australia’s wetland birds. 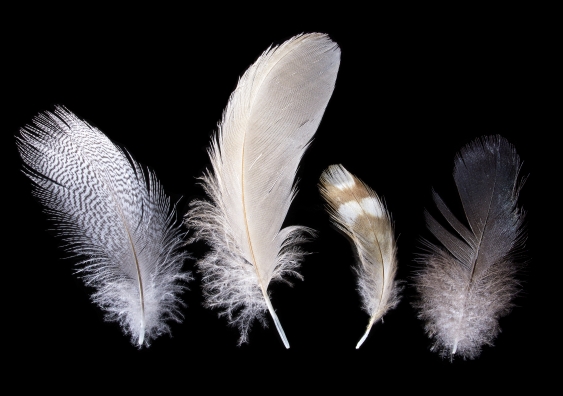 "Feathers are a bit like a memory chip," says environmental researcher Kate Brandis. "They are made of keratin, like human hair and fingernails. As the feathers grow, the bird’s diet is recorded along their length in chemical elements, such as carbon, nitrogen, hydrogen and oxygen, and each stage can be linked to a specific location.

“For example, a feather found in a wetland in NSW, once analysed, can reveal the bird has been living in the Northern Territory.”

Brandis is leading the Feather Map of Australia project, an initiative of UNSW’s Centre for Ecosystem Science and the Australian Nuclear Science and Technology Organisation (ANSTO) to plot the movements of the country’s wetland birds.

Knowing the movements of waterbirds helps identify the wetlands that are the most important habitats requiring protection, Brandis says. Over the past 30 years, waterbird populations have declined as opportunities for breeding have disappeared, mainly due to water resource development.

But traditional methods of tracking the birds – leg banding and satellite trackers – have had limited success and can be expensive. So the researchers have developed a more effective way. They are asking “citizen scientists” across the continent to send in the feathers they find in Australia’s wetlands to be analysed using ANSTO’s nuclear techniques.

Surveying the dozens of feathers on her desk, Brandis struggles to pick a favourite: it’s like asking a parent to choose a preferred child.

"To see it in the wild the duck appears just brown; it’s only when it flicks up its wings that you see the bolder patterns, the yellow and black display feathers."

“Unfortunately, waterbirds aren’t the most colourful,” she smiles, skirting the question. “But some of the feathers are stunning; often the highly patterned ones are from the ducks.”

She points to three feathers from a Plumed Whistling Duck. The downy feathers float along the base of the hollow spines, looking more like fine ice crystals than the underclothes of one of Australia’s common long-necked tree ducks.

“To see it in the wild the duck appears just brown; it’s only when it flicks up its wings that you see the bolder patterns, the yellow and black display feathers,” Brandis says.

The project will continue into 2018 and the feathers will be collected for “as long as people keep sending them in”.

“We’ve had a huge reaction so far, people seem to connect with it,” Brandis says. “Kids are attracted to feathers from a very young age, so when we are given a reason to collect them as adults, it taps into that basic curiosity.”

To take part in the study go to the newsroom.unsw.edu.au