Birth of a technology – UNSW contact lens gets FDA approval

The world’s first Extended Depth of Focus contact lens, for people who experience blurred vision while doing close-up work like reading or sewing, has been granted approval by the US Food and Drug Administration. 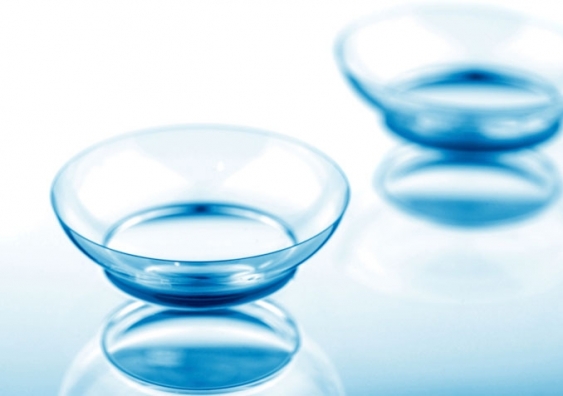 The world’s first Extended Depth of Focus contact lense for people with presbyopia, invented at the Brien Holden Vision Institute at UNSW, has been granted approval by the US Food and Drug Administration.
Institute CEO Professor Brien Holden made the announcement ahead of a visit to the institute yesterday by Federal Opposition leader Bill Shorten, Shadow Minister for Higher Education and Research Senator Kim Carr, and Shadow Parliamentary Secretary for Foreign Affairs Matt Thistlethwaite, MP.
Presbyopia – blurred vision while doing close-up activities like reading or working at the computer, and which usually occurs from around the age of 40 years – affects more than 1 billion people and this number is expected to increase to 3 billion by 2050. The new lenses, invented by Dr Ravi Bakaraju, will be available at the end of 2015.
“This is a landmark for the Brien Holden Vision Institute, the creation of a new technology that provides clear vision from distance to near while minimising ghosting or double imaging,” said Professor Holden, who is also a board member of Brien Holden Vision Pty Ltd (BHV), a commercial subsidiary of the institute.
“Although a range of treatments are available, the number of presbyopes is rising. The BHV Extended Depth of Focus contact lenses will play a major part in helping those with presbyopia see more clearly,” said Professor Holden.
“The contact lenses also represent a significant growth opportunity for our robust science, technology, research and development, licensing, education, public health and blindness prevention activities, as BHV will donate a substantial part of its profits to fund our work at a time when both science and humanitarian development funds are drying up.”
Mr Shorten said: “It’s truly uplifting to be here at the Vision Centre, seeing the great work that this organization has done over many years to help people, both in Australia and throughout the world: in 50 countries, millions of people being helped, tens of thousands of people being trained to make sure that people have better sight.”
He said sustained public investment in science and research and development was critical for Australia to improve its record in innovation and generate highly skilled jobs, and he criticised the Government’s approach.
“The Abbott Government’s last Budget and its ruthless cuts to aid, to research funding, to education, take Australia exactly in the wrong direction,” Mr Shorten told reporters.
Professor Holden said government support of science was vital to Australia’s economic future. “The Cooperative Research Centre program enabled our collaborations with global researchers and industry to produce what is now the most popular contact lens material used globally,” he said.
“The benefits of that success have been enormous: $1500 million invested in research, around $300 million in royalties – reinvested in further breakthrough research, education of more than 180 PhD students, delivery of eye care to over 3 million people in need and training to over 130,000 eye care personnel globally."
“The Australian Government needs to invest in innovation if we are to compete internationally. The gap from early creation of invention, through the development process to commercialisation, is critically important.”
Professor Holden also said that continued foreign aid was crucial for Australia to help eliminate poverty and boost global productivity.
“Investment in aid has allowed Brien Holden Vision Institute to help develop sustainable systems of eye care in more than 54 countries,” he said.
“Recent cuts have led to us having to lay off 45 dedicated, talented professionals in blindness prevention. This will mean that over the next five years more than 4.5 million people will lose both access to eye care and education to produce the eye care practitioners that are badly needed. Tackling vision impairment in developing communities will therefore be put on hold.”
For more information see the Brien Holden Institute.
Twitter Facebook LinkedIn

Nearly 5 billion people to be short sighted by 2050