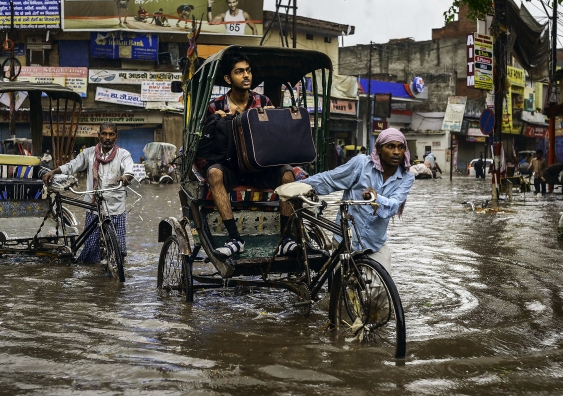 Cities face harsher, more concentrated rainfall as climate change not only intensifies storms, but draws them into narrower bands of more intense downpours, UNSW engineers have found. This has major implications for existing stormwater infrastructure, particularly in large cities, which face higher risks of flash flooding.

“As warming proceeds, storms are shrinking in space and in time,” said Wasko, lead author of the paper. “They are becoming more concentrated over a smaller area, and the rainfall is coming down more plentifully and with more intensity over a shorter period of time. When the storm shrinks to that extent, you have a huge amount of rain coming down over a smaller area.”

Wasko and Sharma, working with collaborators at the University of Adelaide, analysed data from 1,300 rain gauges and 1,700 temperature stations across Australia to see how air temperature affected the intensity and spatial organisation of storms.

They found that atmospheric moisture was more concentrated near the storm’s centre in warm storms than in cooler ones, resulting in more intense peak rainfalls in those areas. The storms were clearly shrinking in space, irrespective of the amount of rain that fell.

Although the data is Australian, it has global implications, said Sharma. “Australia is a continent that spans almost all the climate zones in the world – Mediterranean, tropical, temperate, subtropical – everything except the Arctic or Antarctic. So the results hold a lot of value – we are finding the pattern repeating itself over and over, happening around Australia and around the world.

“Look at the incidents of flooding in Mumbai or in Bangkok last year – you see urban streets full of water,” he added. “You see it now in Jakarta and Rome and many parts of Canada. That’s because the stormwater infrastructure cannot handle the rain, and part of the reason there’s more rain is the increase in global temperatures.”

Most urban centres have older stormwater infrastructure designed to handle rainfall patterns of the past, which are no longer sufficient. “The increase is especially noticeable in urban centres, where there is less soil, unlike rural areas, to act as a dampener,” said Sharma. “So there is often nowhere else for the water to go, and the drainage capacity is overwhelmed. So the incidence of flooding is going to rise as temperatures go higher.”

Wasko, lead author of the paper, said scientists have long suspected that the intensity of rainfall would be boosted by climate change, as the warming air raises the carrying capacity of moisture. But while extreme rainfall has been rising, little was known about the mechanisms causing it. The latest study shows that storms are changing in spatial terms.

It follows a study by the same authors in Nature Geoscience in June 2015 showing that storms were also changing their ‘temporal pattern’ – that is, getting shorter in time, thereby intensifying. When it comes to flash flooding, the amount of rain that falls over a period of time is much more important than the total volume of rainfall that a given storm delivers. This  study was the first to show that climate change was disrupting the temporal rainfall patterns within storms themselves.

If both spatial and temporal changes in storms continue, as they are likely to do as the world warms, there will be more destructive flooding across the world’s major urban centres.

In their Nature Geoscience paper, the duo calculated that floods in some parts of Australia would likely increase by 40%, especially in warmer places like Darwin. “If you add the spatial pattern from this latest paper, you will probably increase this 40% number to maybe 60%,” said Sharma.

Earlier this year, a pivotal framework for infrastructure maintained by the Institution of Engineers, the Australian Rainfall and Runoff national guidelines, were updated for the first time since 1987, a process that took three years. It’s now clear, said Sharma, that these will need to be adjusted, as the safety and sustainability of Australian infrastructure adapts to a warming climate.

And there are still unknowns to contend with, he added.

“When we say that the storms are shrinking in space and shrinking in time, and we say floods will increase, we are making an assumption that the volume of water coming down is not changing,” said Sharma. “That assumption is very conservative, because you would expect the air to hold more moisture. If you factor that in as well, there’ll be even more rainfall, and more floods.”

UNSW’s Faculty of Engineering is the powerhouse of engineering research in Australia, comprising of nine schools, 21 research centres and participating or leading 10 Cooperative Research Centres. It is ranked in the world’s top 50 engineering faculties, and home to Australia’s largest cohort of engineering undergraduate, postgraduate, domestic and international students.