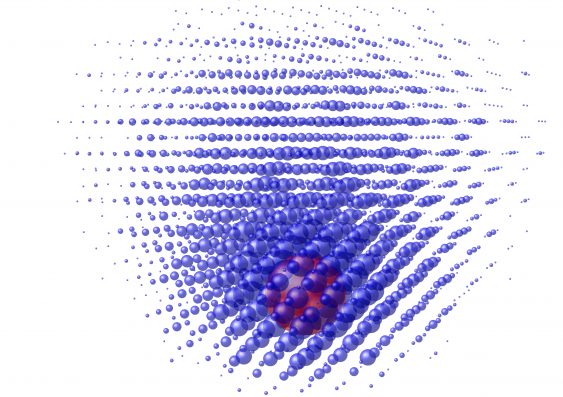 Electron wave in a phosphorus atom, distorted by a local electric field.

The findings have been published in the open-access journal Science Advances.

The UNSW team, which is affiliated with the ARC Centre of Excellence for Quantum Computation & Communication Technology, was first in the world to demonstrate single-atom spin qubits in silicon, reported in Nature in 2012 and 2013. 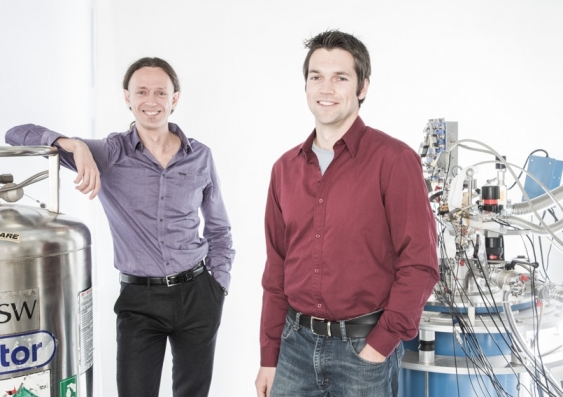 The team has already improved the control of these qubits to an accuracy of above 99% and established the world record for how long quantum information can be stored in the solid state, as published in Nature Nanotechnology in 2014.

It has now demonstrated a key step that had remained elusive since 1998.

“We demonstrated that a highly coherent qubit, like the spin of a single phosphorus atom in isotopically enriched silicon, can be controlled using electric fields, instead of using pulses of oscillating magnetic fields,” explained UNSW’s Dr Arne Laucht, post-doctoral researcher and lead author of the study.

Associate Professor Morello said the method works by distorting the shape of the electron cloud attached to the atom, using a very localized electric field.

“This distortion at the atomic level has the effect of modifying the frequency at which the electron responds.

“Therefore, we can selectively choose which qubit to operate. It’s a bit like selecting which radio station we tune to, by turning a simple knob. Here, the ‘knob’ is the voltage applied to a small electrode placed above the atom.”

The findings suggest that it would be possible to locally control individual qubits with electric fields in a large-scale quantum computer using only inexpensive voltage generators, rather than the expensive high-frequency microwave sources.

Moreover, this specific type of quantum bit can be manufactured using a similar technology to that employed for the production of everyday computers, drastically reducing the time and cost of development.

The device used in this experiment was fabricated at the NSW node of the Australian National Fabrication Facility, in collaboration with the group led by UNSW Scientia Professor Andrew Dzurak.

Key to the success of this electrical control method is the placement of the qubits inside a thin layer of specially purified silicon, containing only the silicon-28 isotope.

“This isotope is perfectly non-magnetic and, unlike those in naturally occurring silicon, does not disturb the quantum bit,” Associate Professor Morello said.

The purified silicon was provided through collaboration with Professor Kohei Itoh from Keio University in Japan.

Associate Professor Morello is at the School of Electrical Engineering & Telecommunications, UNSW  Australia. He is a team leader at the ARC Centre of Excellence for Quantum Computation and   Communication Technology, headquartered at UNSW. The quantum bit device was constructed at UNSW at the Australian National Fabrication Facility, with support from researchers at the University of Melbourne and the Australian National University. The research was funded by the Australian Research Council, the US Army Research Office, the NSW Government, UNSW Australia and the University of Melbourne.