Research breakthroughs in quantum computing and climate science have helped make UNSW one of the top three institutions in the country for high-quality science research publications, the latest Nature Publishing Index shows. 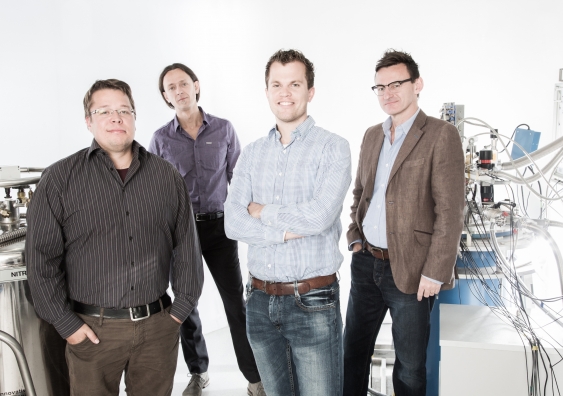 UNSW is one of the top three institutions in the country for high quality science research publications, according to the latest Nature Publishing Index for the Asia-Pacific (APAC) region.

Last year, UNSW was hailed as the “rising star” in the region by the Index, which is a supplement to the prestigious journal Nature.

This year’s edition, released today, shows UNSW has climbed one place to be third in Australia for articles published in 68 highly selective science journals in 2014.

A strong performance in physical sciences helped UNSW improve its standing this year. This was in large part due to the performance of the UNSW-based ARC Centre of Excellence for Quantum Computation & Communication Technology, led by Scientia Professor Michelle Simmons and the ARC Centre of Excellence for Climate System Science led by Professor Andy Pitman.

“The UNSW [Quantum] team leads the world in solid-state quantum computing using silicon, which has cost advantages and is already widely used in commercial electronics,” the Nature Index concluded.

UNSW leads the world in solid-state quantum computing using silicon, which has cost advantages and is already used in commercial electronics.

"For quantum computing to become a reality we need to operate the bits with very low error rates," said Professor Dzurak, who is Director of the Australian National Fabrication Facility at UNSW, where the devices were made.

"We've now come up with two parallel pathways for building a quantum computer in silicon, each of which shows this super accuracy," added Associate Professor Morello.

"The Centre has only been in existence for three years but in 2014 alone produced 17 Nature papers authored by researchers from the University of New South Wales.”

Australia was fourth in overall publishing output for the region, and 12th in the global index – significant achievements given recent cuts to scientific research, the Nature Index noted.

“In the short term, any Australian science and technology strategy must deal with dwindling federal funds,” the Index wrote. “In 2014, Australian government spending on research and development dropped to its lowest level since 1984 – just 2.2% of the federal budget.”

China leads the way in the region, trailing only the United States in the total number of high-quality science papers published.

Significantly, Australia outperforms Japan and China in its relative output in Nature and Science journals, the Index noted.

More information about the rankings is available at the Nature Index website.