Opinion Bringing devils back to the mainland could help wildlife conservation 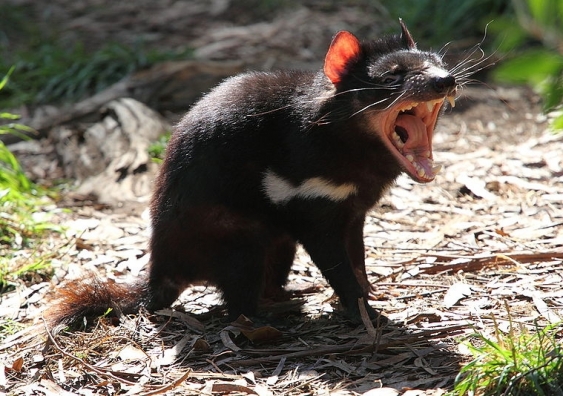 Should the Tasmanian devil be reintroduced to the mainland? (Credit: Chen Wu/Flickr/Wikimedia Commons, CC BY)

OPINION: Australia’s mammal extinction crisis needs urgent attention. Foxes and cats have significantly contributed to the loss of some of our most vulnerable species. Alarmingly, the trend doesn’t look like slowing.

Many researchers agree that the dingo plays an important role in mitigating native mammal declines, because they suppress foxes and, in some cases, cats. So when we remove dingoes to benefit livestock, our native wildlife suffers.

This leaves environmental managers in a difficult situation, because what’s best for a livestock farmer isn’t best for conservation. But our research, published this month in Biological Conservation, suggests that devils could help slow native mammal declines on the mainland with negligible harm to livestock.

Research suggests that devils play an important top predator role in Tasmania. So we modelled what would happen if we reintroduced them back to the mainland, where they existed until quite recently – probably around 3,000 years ago. We found that devils have important ecosystem effects that are similar to, but weaker than, those of dingoes.

Specifically, our modelling suggested that reintroducing devils to the mainland would lead to reductions in fox and cat numbers. Foxes and cats are arguably the greatest living threat to our native mammals, so any reduction in their abundance is going to be of great benefit to our struggling native mammal species.

Overabundance of large herbivores is also a problem in areas without large predators. Our models show that devils, like dingoes, negatively affect wombats, kangaroos and wallabies. The regulation of large herbivores would increase the available food and shelter for our small and medium-sized native mammals.

Essentially, our models show that devils can help maintain a state of ecosystem equilibrium in the absence of dingoes. But there’s another reason why a devil reintroduction could benefit biodiversity conservation.

Devils themselves are facing a real extinction threat from devil facial tumour disease. A disease-free mainland population of devils would be an excellent form of insurance if the species were to become extinct in Tasmania.

Where could devils be introduced?

Our modelling showed that there is plenty of suitable devil habitat in eastern Australia. Much of the Great Dividing Range provides similar conditions to where devils are currently found in Tasmania.

It is likely that dingoes contributed to the extinction of devils from the mainland in the first place, aided by an increase in human persecution of devils. With devils now protected, the threat from humans is now largely gone, leaving dingoes as the only main threat.

However, we provided maps showing areas where dingoes are absent or functionally extinct which could provide potentially suitable reintroduction sites.

Devils are not as great a threat to livestock as are dingoes. Their impact is more similar to that of foxes, with young sheep most at risk. Therefore, a reintroduction is likely to garner more support from farmers than the alternative of actively maintaining dingo populations.

The next step is to test our model predictions with a carefully controlled, free-ranging captive trial. With many native species under serious threat, we urge land managers to begin planning now.

Undoubtedly there are some risks associated with reintroducing devils, but the risks of inaction are far greater. Because devils lived on the mainland until recently, our native species have already evolved to live alongside it. There is little doubt that the net negative effect of devils on native mammals will be far less than that of foxes and cats.

Daniel Hunter is a PhD student and filmmaker at UNSW.

Mike Letnic is an Associate Professor of ecology and conservation biology at UNSW.

This article was first published in The Conversation. Read the original story here.

Bringing Tasmanian devils back to the mainland would restore ecosystems