Bringing Tasmanian devils back to the mainland would restore ecosystems

Returning the Tasmanian devil to mainland habitats where dingoes have been culled will improve biodiversity outcomes, UNSW researchers say. 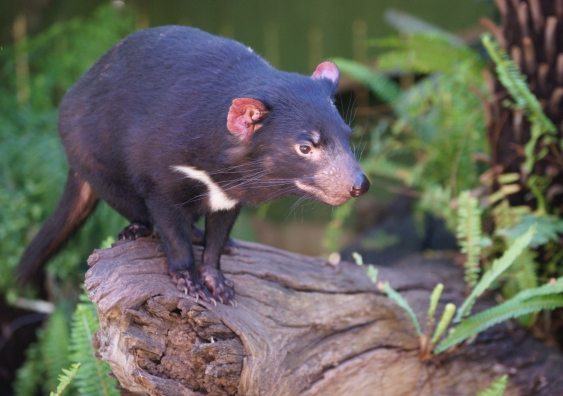 Reintroducing Tasmanian devils to the mainland could improve biodiversity by limiting the spread of red foxes and feral cats in habitats where dingoes have been culled, a new study suggests.

Tasmanian devils (Sarcophilus harrisii) once lived across the Australian continent, but went extinct on the mainland about 3,000 years ago – likely as a consequence of being hunted by dingoes.

Today, extensive dingo culls to protect livestock have shifted the ecological balance, paving the way for invasive predators to wreak havoc with native mammals, worsening Australia’s extinction crisis and igniting discussions about bringing the devil back to the mainland.

Ecologists from UNSW have now assessed – for the first time – the impact of reintroducing Tasmanian devils to forest ecosystems in South Eastern parts of New South Wales.

“There are large areas where the dingo is gone and we need a predator who can suppress fox numbers,” says PhD candidate Daniel Hunter from the UNSW School of Biological, Earth and Environmental Sciences.

“The devil is the obvious answer. It doesn’t pose as serious a risk to livestock, and it has played a major role in stopping foxes from establishing a foothold in Tasmania.”

Hunter is the lead author of a study published in the journal Biological Conservation, which highlights the potential benefits of using the devil as a replacement apex predator. The study found that the marsupial could restore important ecosystem functions once performed by dingoes.

In addition, reintroduction could help ensure the long-term survival of the devil, which has seen massive population decline over the last two decades from devil facial tumour disease.

The team reviewed previous studies to understand more about the ecological impacts of dingoes, devils and foxes. Co-author Dr Thomas Britz from the UNSW School of Mathematics and Statistics then applied this information to mathematical models, which tried to predict how a range of ecosystems would respond to the presence of devils.

These models mapped out different scenarios in which the re-introduced devil co-existed with varying populations of the two other predators: ranging from completely eradicated, to reduced, and abundant.

Their results suggest that reintroducing devils would result in fewer foxes and feral cats, as well as grazing herbivores such as wallabies, which remove vegetation that helps smaller animals hide from predators.

“We suspect that they help control the fox and cat populations by directly attacking them and their young,” says co-author Associate Professor Mike Letnic from UNSW. “There is very good evidence from Tasmania that cats modify their movements and numbers are lower where there are healthy devil populations.”

The research also suggests there would be benefits for small and medium-sized animals, such as bandicoots and ringtail possums, as well low-lying vegetation. However, threatened species vulnerable to fox predation benefited little from devil introduction.

“Devils aren’t a silver bullet, but we think that they could do a lot of good on the mainland, and this study indicates that a monitored process of reintroduction could actually work,” says Associate Professor Letnic. “We need to take action to arrest the extinction crisis we have in Australia, and that requires being bold and trying something new.”

NOTE: Daniel Hunter has produced a documentary called Battle in the Bush about the important ecological role played by dingoes in Australian ecosystems. The trailer can be viewed here and the full film can be made available for download.

Bringing devils back to the mainland could help wildlife conservation