It will not be simple or cheap, but fencing dams in arid areas could create "cane toad breaks" to halt the march of these invaders across the continent, writes Mike Letnic 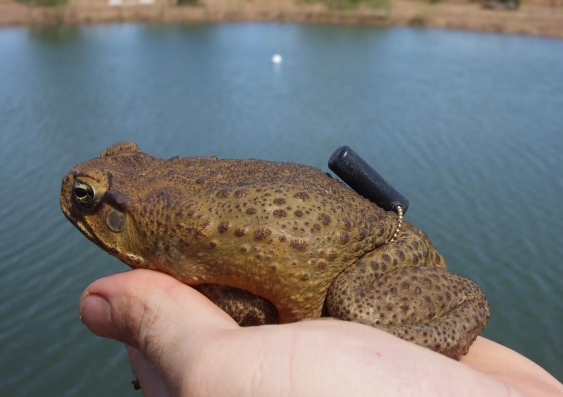 A cane toad with a tracking device attached

OPINION: Cane toads, introduced in 1935 to control cane beetles, have now spread across a huge swathe of Australia, from the Kimberley in northern Western Australia to northern New South Wales.

They’re still spreading, at a rate of between 40 and 60 km westward each year, and without management could eventually cover almost all of northern Australia.

Over the past few years, I and colleagues have been modelling and testing the best way to control toads, particularly by fencing off man-made dams in inland Australia. In a paper published this week in the Journal of Applied Ecology, we show that fencing off dams can stop the spread of toads.

Cane toads have had dramatic effects on native predator populations across much of the continent, because native predators have no resistance to the toxins possessed by the toads. Consequently populations of goannas, freshwater crocodiles, some snakes and quolls have crashed following the toad invasion.

The importance of goannas as bushtucker has declined across much of northern Australia because of the decline in goanna numbers following the arrival of toads.

Perhaps surprisingly, toads also interfere with cleaning up cow pats. Dung beetles were introduced to Australia in the 1960s to help breakdown cattle dung, and reduce parasite loads in cattle because their dung burying activities disrupt the breeding-cycles of flies and parasitic worms. Dung beetle numbers and their effectiveness at breaking down cattle dung have declined in some regions where toads have invaded.

Most of that area that cane toads will invade in Australia is arid or semi-arid bushland used for livestock grazing. In these areas, natural sources of water are normally sparse except after rain.

However, farmers have created thousands of dams at intervals of about 10 km to provide water for their livestock. Livestock normally do not drink from the dams. The dams are reservoirs for water that is pumped from underground-bores. They then provide water to livestock via troughs. These man-made sources of water each attract on average 600 toads and have vastly increased the area of Australia that the pests can invade.

Cane toads use the dams as refuges during the long dry periods that normally prevail in inland Australia. Toads disperse away from the dams after rain but must find another permanent water source to survive the next dry spell because they cannot survive without access to water for more than three days.

We began our study in 2009 by fencing off dams in inland Australia. After two days the toads were eradicated from the area around the dams, and remained so for at least two months.

But the real test was if the fences stopped toads re-invading during the wet season. Our research published today shows that they do, suppressing toad numbers around dams for at least a year after they were fenced.

Our research shows that restricting toads access to water by fencing dams or using tanks made of plastic or steel as alternative type of reservoir to dams could work on a large scale to halt their march across the continent. If done strategically, fenced dams could act as “toad breaks” in much the same way as fire breaks work to slow bushfires.

Restricting toads’ access to water could also be used in areas where toads have already invaded to reduce their numbers and their impacts.

Prior to our research, no effective way has been found to control cane toad numbers. Restricting toads’ access to water could massively reduce their numbers and impacts across most of the area that cane toads will invade.

However, it would not be a simple task or cheap. There are thousands of dams and our approach is only suitable for dry regions where natural sources of water are few. Mapping of dams and predictions of cane toad spread show that there are areas in Australia where excluding toads from water could be conducted strategically to have most effect.

For example, there is only a narrow corridor of land along the coast, through which cane toads could invade the Pilbara region of Western Australia. Keeping toads out of dams along this corridor could keep toads out of Pilbara.

Ultimately successful control of cane toads will require government agencies to work together with pastoralists and community groups to develop strategies for toad control and relieve the impacts that cane toads are having.

Mike Letnic is an Associate Professor in the UNSW School of Biological, Earth and Environmental Sciences