UNSW-led scientists studying a cave in Western Australia have shown that stalagmites formed by mineral-rich water drips from the ceiling could help reveal past wildfires that burned above the cave. 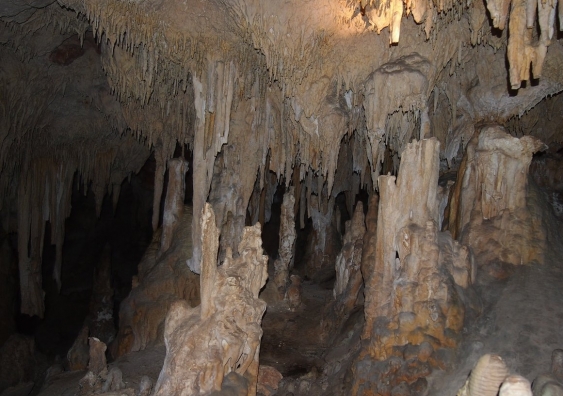 When mineral-rich water drips from a cave’s ceiling over centuries and millennia, it forms rocky cones that hold clues to the Earth’s past climate. Now, researchers in Australia and the UK have found that these structures can also help trace past wildfires that burned above the cave.

Their research is published today in Hydrology and Earth System Sciences, an open access journal of the European Geosciences Union.

Pauline Treble, a researcher at UNSW and the Australian Nuclear Science and Technology Organisation (ANSTO) first became interested in Yonderup Cave as an archive of past climate. She wanted to find out whether this shallow cave system in southwest Australia was a good site to reveal past changes in rainfall and temperatures.

Our results show for the first time that wildfire changes cave dripwater chemistry, and this chemistry will be preserved in stalagmites.

“We monitored two drips in the cave expecting to see responses in the data that we could attribute to climate. But the results were surprising,” says Treble.

The chemistry of the dripwater, and how it changed over time, was different in the two sites. The data could not be showing a regional climate change at the surface, but rather a local change that affected the ground above the two sites in different ways.

“This is when we started to consider whether the intense wildfire that had occurred six months before monitoring started was responsible for the inconsistent data,” Treble says.

Treble’s UNSW student, Gurinder Nagra, was excited by the idea of finding traces of wildfires in cave dripwater. “Not only does this open up a new avenue for the fire community, but it could hold the key to our understanding of fire and climate in the past, and how this influences our warming world,” he says. 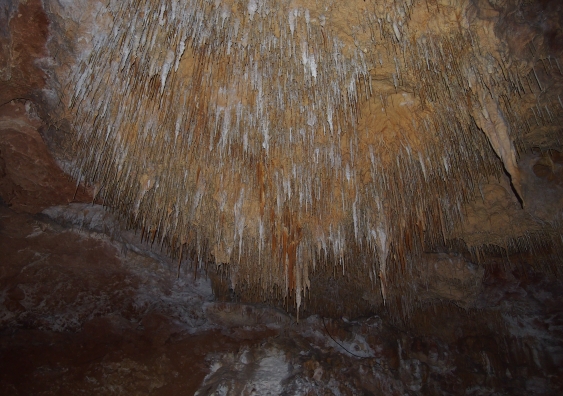 Stalactites at one of the sites in Yonderup cave where researchers collected dripwater. This image is licensed under a Creative Commons Attribution 3.0 Licence. Photo: Andy Baker/UNSW

But the signal that wildfires leave in cave formations can also present a problem, because it is remarkably similar to the signal for a change in climate.

Stalagmites (which grow from the ground up) and stalactites (which hang from the ceiling) form when water at the surface seeps through the soil and drips into underground chambers over hundreds or thousands of years. The dripwater contains minerals, which can gradually accumulate to form icicle-like rocky structures that preserve environmental information from the water within its growth layers. By looking into the chemistry of these growth layers, scientists can find clues about how rainfall and temperature were changing above ground when the water dripped into the cave. Due to the way stalagmites and stalactites grow, the layers in the middle of these structures preserve older environmental information, while those closer to the surface hold clues to the more recent past.

Oxygen is one of the key elements scientists look at to track past climate change. Specifically, they measure changes in the ratio (noted δ18O) of two oxygen isotopes: the heavier 18O, which takes more energy to evaporate, and the lighter 16O. Roughly speaking, a higher ratio signals warmer temperatures and less rainfall.

At Yonderup Cave, the researchers collected dripwater samples from two sites from August 2005 to March 2011 and analysed them for δ18O, as well as for trace metals such as magnesium. They then compared the oxygen isotope ratio in Yonderup dripwater with that predicted by a model (which simulated the dripwater δ18O based on measurements of rainwater δ18O), as well as that measured at a different cave in the region. They found that the oxygen isotope ratio in Yonderup dripwater was 2‰ (2 parts per thousand) higher than expected. 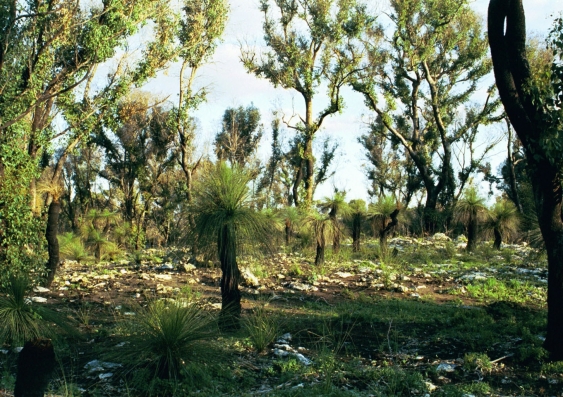 Recovering vegetation above Yonderup Cave taken in August 2005, a few months after the intense wildfire that affected the area in February that year. This image is licensed under a Creative Commons Attribution 3.0 Licence. Photo: Pauline Treble

“This value means that the water was enriched in the heavier 18O isotope by two-parts per thousand,” Treble explains. “This may not sound like much, but if we were interpreting this change in a stalagmite record [of past climate], it would be equivalent to some of the largest interpreted climatic changes seen in the Quaternary record [the last 2.6 million years].”

Treble says the results could have implications for interpreting δ18O in fire-prone regions, such as Australia or the southern Mediterranean. A change that could be due to a local wildfire in the land above the cave could be wrongly attributed to a change in regional or global climate.

The Hydrology and Earth System Sciences study highlights the need to carefully interpret dripwater cave data, and to also look into changes in its trace metals, as opposed to only δ18O, when analysing it. But it also shows that we can learn more about the Earth’s past than we previously thought.

“Our results show for the first time that wildfire changes cave dripwater chemistry, and this chemistry will be preserved in stalagmites,” says Nagra.

The European Geosciences Union is Europe’s premier geosciences union, dedicated to the pursuit of excellence in the Earth, planetary, and space sciences for the benefit of humanity, worldwide.