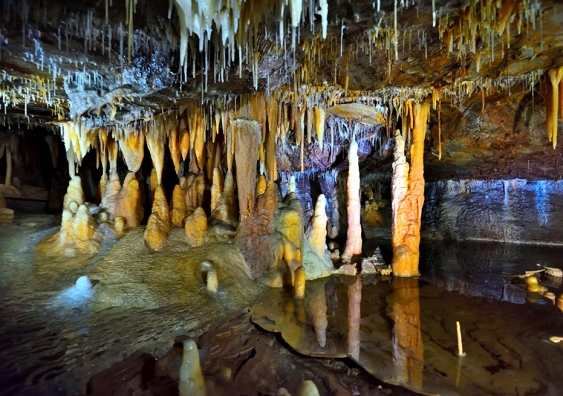 A first-ever global analysis of cave drip waters has shown where stalagmites can provide vital clues towards understanding past rainfall patterns.

In a study published recently in the prestigious journal Nature Communications, UNSW Sydney scientists led an international group of researchers to amass the data of 163 drip sites in 39 caves on five continents.

They found that in climates that have a mean average temperature of less than 10oC, isotopes of oxygen in cave drip water were similarly composed as those measured in rainwater. As UNSW’s Dr Andy Baker explains, this follows what you would expect in colder climates with less evaporation of rainfall.

“This oxygen in the water drips from the stalactites and onto the stalagmites,” says Dr Baker, from UNSW’s School of Biological and Earth and Environmental Sciences.

“The drip water originally comes from rainfall, providing a direct link to the surface climate. Understanding the extent to which the oxygen isotopic composition of drip water is related to rainfall is a fundamental research question which will unlock the full climate potential of stalagmites and stalactites.”

“In hotter climates, recharge to the subsurface doesn’t occur from all rain events, rather it likely only occurs after very heavy rain, or seasonally. This study identifies this for the first time and also provides a range of temperatures constraints – this was never known before,” he says.

Dripping station at the Arcy-sur-Cure Cave (Yonne, Central-France). The dripping water is regularly sampled at this station and the modern calcite is gathered on a glass. Picture: D. Genty

In effect, he says, oxygen isotopes in stalagmites in warmer climates display the balance between wet weather events and prolonged periods of drying.

“For stalagmites in warm regions it suggests that the oxygen isotope composition will tell us about when recharge occurred – in other words, when, and how often,” Dr Baker says.

“And that is as valuable as it is unique. In regions like mainland Australia, with extreme weather events like drought and flooding rains, it’s a tool to see how often both occurred in the past.”

Dr Baker says that with this knowledge it will help us understand how important rainfall is in the replenishment of our groundwater resource.

“This knowledge will improve our understanding of how sustainable our use of groundwater is, especially in regions where groundwater is only recharged by rain,” he says.