A new Centre of Excellence headquartered at UNSW and led by Professor Andy Pitman will focus on understanding the processes that trigger extreme weather and climate events. 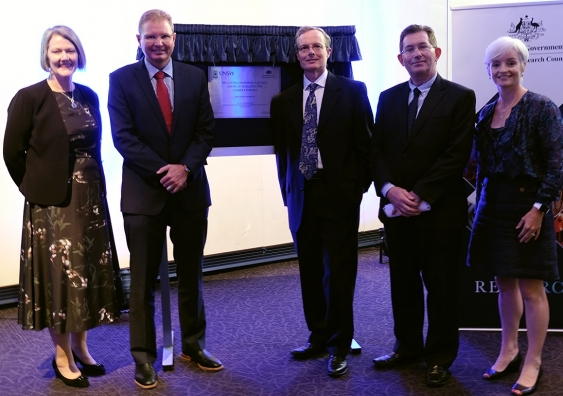 A new Centre of Excellence focusing on extreme weather and climate events and headquartered at UNSW has been launched by the Federal Minister for Small and Family Business, the Workplace and Deregulation, the Hon Craig Laundy.

As MC of the event, UNSW Dean of Science Professor Emma Johnston, a marine biologist, welcomed the audience and described how rapidly warming waters off the east coast of Australia had already cost Tasmania some of its kelp forests, which provide vital habitat for fish.

Professor Ian Jacobs spoke about the bushfire that tore through Tathra on the NSW south coast on Sunday 18 March, after an unseasonably hot day and gale force winds propelled the fire front through the coastal town.

Minister Laundy noted that extreme temperatures were being recorded in South Australia as he spoke. He said the government had spent $450m a year, on average, rebuilding infrastructure after extreme climate events between 2002 and 2010.

“It is vital – apart from the social cost that we see so blatantly spelt out in front of us with something like Tathra – that we invest in the science and understanding [of climate extremes], so we as a government can be better prepared for our side of the equation,” Mr Laundy said.

Professor Thomas praised the leadership of the Centre, saying their team would not only address the challenges of climate extremes but also “underpin Australia’s future in climate science by training the next generation of researchers”.

Professor Pitman said the Centre’s Graduate Program would be a key part of the educational approach. He also promised a keen focus on big problems, saying the Centre would “get down and dirty with the physics, the ecology, the mathematics and the computer science that will help us understand climate extremes and improve their prediction”.

He acknowledged the challenges around the exascale computing needed by the Centre, and the volumes of data that would have to be managed. His final point was that obtaining funding for the Centre was not an end, but just the beginning.

“It’s a long road ahead,” he said. “We are going to confront challenges, and I am sure we are going to experience disappointments, but I am full of confidence we will meet our goals in improving the prediction of climate extremes to the benefit of Australia’s people, economy and environment.”