In 2016, women represented just 29% of workers with university qualifications in science, technology, engineering or maths. And that was before the pandemic disruption. 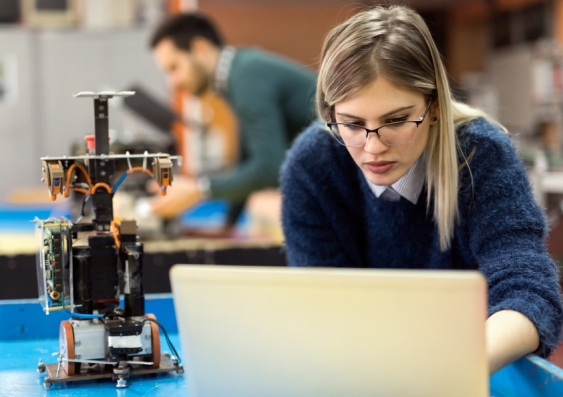 In 2006, 27% of STEM university graduates in the labour force were women. Ten years later, this had only risen to 29%. Image from Shutterstock

The events of 2020 are reshaping the way we live, work, teach and learn. And while we have all been affected differently, the impact of the COVID-19 pandemic on women has been particularly significant.

A recent report by the Rapid Research Information Forum found the pandemic has left women facing disproportionate increases in caring responsibilities and disruptions to working hours and job security.

The hard-won gains made by women in science, technology, engineering and maths (STEM) are at risk, especially if employers of people with STEM skills do not closely monitor and mitigate the gender impact of their decisions.

The pre-pandemic impact of caring for children and the uptake of flexible working arrangements are just two of the issues considered in the second edition of the STEM Workforce Report, released this week by the Office of the Chief Scientist. Drawing on 2016 Australian Census data, this report provides a comprehensive analysis of the STEM workforce in Australia.

However, the pace of change towards a fairer and more diverse STEM labour force is still slow. In 2006, 27% of STEM university graduates in the labour force were women. A decade later, this had only risen to 29%.

Just 3.3% of Australian-born women with a university STEM qualification were unemployed, as of census night in 2016. But the corresponding figure for similarly qualified overseas-born women who arrived in Australia between 2006 and 2016 was 14.1%.

Women in STEM also have lower average pay than similarly qualified men, in both part-time and full-time roles. For full-time workers with university STEM qualifications, 45% of men earned A$104,000 or above, compared with 26% of women. 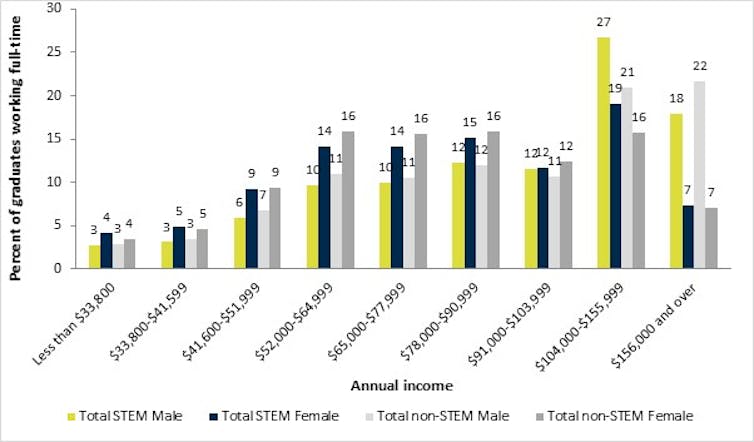 Income distribution of full-time workers with university qualifications, by field and gender. Office of the Chief Scientist, Author provided

How to keep women in STEM

Women who pause their careers to have children often end up leaving the labour force or returning on reduced hours. Flexible work arrangements – including working part-time and working from home – are crucial tools for keeping parents in the labour force. Initiatives such as childcare subsidies and incentives for fathers to take significant parental and carer’s leave have proven effective in supporting equitable outcomes in the workforce.

The flow diagram below represents labour force data for women aged 15-35 who did not have a child and were working full-time in 2011. When we reviewed the status of these women five years later, we found that STEM-qualified women who had children were less likely to still be employed, and more likely to be working part-time. In contrast, the work status of STEM-qualified men was largely unaffected by having children, and men with children tended to earn more than those without. 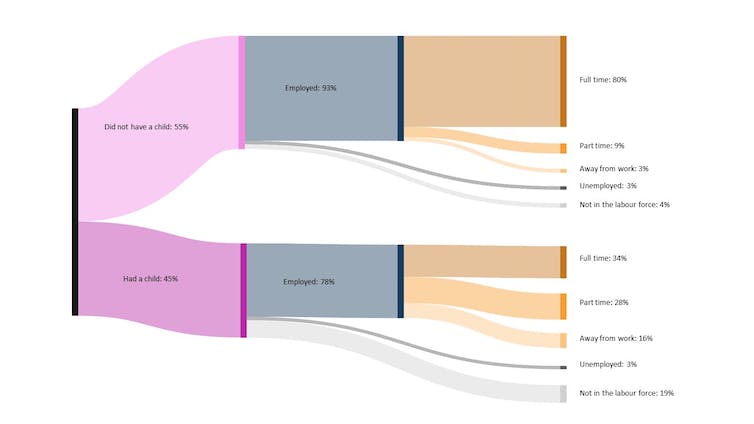 Employment pathways for women with university STEM qualifications. This analysis looked at women aged 15-35 who did not have a child and were working full-time in 2011, and plots the labour force status of these women five years later. Office of the Chief Scientist, Author provided

Our report found that STEM-qualified women also do more hours of unpaid domestic work than STEM-qualified men. Women working full-time were more than twice as likely as men (19% vs 8%, respectively) to do more than 15 hours’ domestic work per week. The recently reported experiences of women taking on a higher share of child care during the COVID-19 pandemic appear to support these findings.

The census data can only tell us part of the story. The Women in STEM Decadal Plan, developed by the Australian Academy of Science and the Australian Academy of Technology and Engineering, presented information from numerous sources to explore the breadth of women’s experiences. It showed that negative stereotypes dissuade women from pursuing STEM careers and “a significant cultural shift in workplaces is necessary to create gender equity for women in STEM”.

These findings are supported by research from the Male Champions of Change STEM group, which found women in STEM jobs experience significantly more barriers than men, including sexism, workplace culture, exclusion and a lack of career progression. Two-thirds of women reported having their voices devalued at work. Listening to and acknowledging the experiences of women and other disadvantaged groups in STEM is necessary to develop and implement meaningful actions for change.

We mustn’t allow the upheaval from COVID-19 to wipe out the small gains we have made in STEM-qualified women’s representation and participation in the workforce.

The pandemic has rapidly changed the way we work, showing that workplace flexibility is just one way to keep all of us working productively. Other profound changes to workplace culture should follow, or we risk yet another decline in women’s workforce participation.