On the eve of international climate change talks in Paris, UNSW magazine sits down with UNSW’s Matt England and Potsdam University’s Stefan Rahmstorf to discuss the likelihood of a legally binding global agreement, climate change denial and the importance of staying positive. 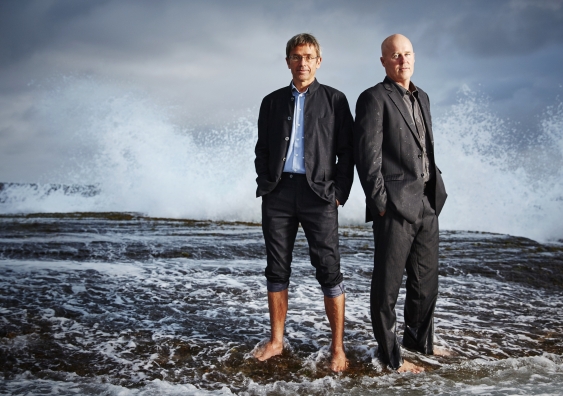 Representatives of around 190 nations will meet in Paris in December to negotiate a binding agreement to limit global warming to 2°C above pre-industrial levels, in an effort to avoid the worst impacts of climate change. Yet to date the carbon emissions reduction pledges appear to fall short of the crucial 2°C target. What does a 3°C warmer world look like?

Stefan: I’m concerned about what more than 2°C warming will do to the large-scale functioning of our Earth systems, such as the global ocean circulation system or the monsoon system. There are many non-linear systems that have a critical point. When you cross that they fundamentally change.

Climate change is the first of the global “Grand Challenges” identified in UNSW’s 2025 Strategy, which aims to position the University as an international leader in research and as a premier forum for debate and thought leadership.

There is already a significant decline in the Gulf Stream system of the North Atlantic. When we get beyond 2°C things get highly risky. We would be far outside the relatively benign stable climate regime we have enjoyed for the past 10,000 years.

Matt: All of the worst impacts of climate change in a 2°C world become even more costly and damaging at 3°C. And as Stefan said, more and more tipping points would pass, locking in irreversible changes. For Australia, the risk of catastrophic bushfires, severe drought, intense storms and damaging coastal inundation would be substantially ramped up under 3°C global warming.
Major ice sheet stability would be at risk.

Stefan: The loss of Greenland ice alone means seven metres of global sea level rise and thus the loss of large coastal cities and small island states. This has to be said very clearly. 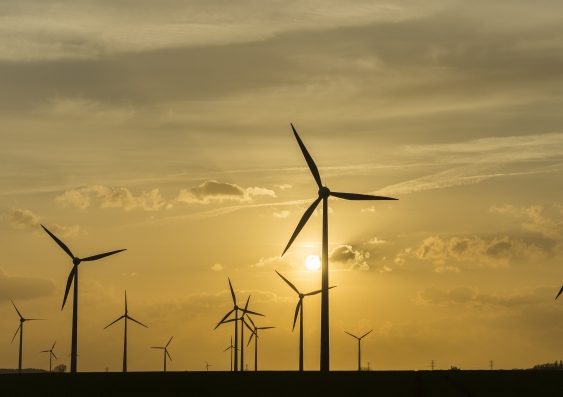 Is it possible at this late stage to stay below 2°C?

Matt: I’m doubtful, but it is possible. It is estimated if we stopped all emissions right now globally, the lag in the climate’s response would bring us in at 1.5 to 1.6°C above pre-industrial times. But it could come in as high as 2.5°C. With drastic emissions reductions we can give ourselves a good chance of staying below 2°C. My pessimism comes from current global emissions trajectories and the lack of political will. A war-like response is required to address climate change – requiring intensive effort and innovation. Until that happens I think the 2°C target is highly unlikely to be achieved.

Stefan: One shouldn’t mix up political pessimism with what is physically possible, what is technologically possible or what is economically possible. From the point of view of geophysics and climate science, there is nothing stopping us keeping warming below 2°C, or even below 1.5°C. Technologically it is entirely possible. We need to tap less than 1/10,000th of the solar radiation reaching Earth to generously supply the whole of humanity with energy, and we have the technology to do it. How much it would cost to stay below 2°C has been thoroughly answered by the last Intergovernmental Panel on Climate Change (IPCC) report. The estimated costs are very moderate – just 0.06% of global GDP each year.

Climate change denial is a particularly Anglo-Saxon phenomenon. In other countries like Germany media reports reflect the scientific consensus.

Matt: Or another way of framing it is whatever level of economic wealth the world achieves by 2100 would be delayed by only two years. That’s a tiny price to pay. And of course, you have to realise the cost of doing nothing is significantly higher.

In Germany we are more optimistic. Last year, German greenhouse gas emissions were 27% below the 1990 level and our economic output, GDP, has almost doubled since 1990. The German experience shows you can decouple the growth of emissions from economic growth and still prosper.

What is the key issue most people fail to understand about climate change?

Stefan: People don’t understand it is irreversible. You can’t decide 20 years down the line that it’s time to do something about global warming. By then it will be too late. Our current emissions are committing us to metres of sea-level rise, unfolding over hundreds of years into the future.

Also not so well known is the ocean acidification caused by our CO2 emissions, which will destroy ocean ecosystems such as coral reefs. That alone should be enough reason to stop emitting CO2. 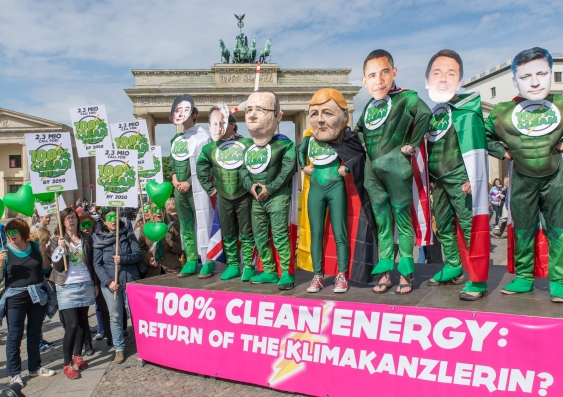 You have both worked in climate for a quarter of a century. When did you first realise the scope of the danger we face?

Stefan: I have been aware since the early 1980s. As an example, I spent four years in New Zealand in the 1980s doing my PhD and despite being homesick never flew home because I didn't want to emit more CO2 by flying. The only time I went outside New Zealand was to present my first ever conference talk, in Hobart.

Matt: For me it started back in the late 1980s reading papers projecting global warming and sea level rise. But I was perhaps first truly confronted by the pervasive impacts of climate change when I led the Copenhagen Diagnosis in 2009. Seeing the changes across a portfolio of sectors was confronting. It was also scary to see the lack of action on something that would fundamentally change the lives of all humanity.

What is it about the lead-up to these talks that gives you hope?

Stefan: There are a lot of optimistic signs now. The United States and China have agreed on what they are going to do. There are emissions reduction commitments from countries representing 88% of global emissions and 88% of global population.

I think we will reach a meaningful agreement in Paris, but it alone will not deliver enough to stay below 2°C. It would be utopian to hope that. Thus it is critical that Paris agrees on mechanisms to tighten up the commitments later, just like for the Montreal Protocol [which protects the ozone layer by phasing out the production ozone-depleting substances].

Secondly, after Paris we will need a strong coalition of decarbonisation pioneers to go ahead and set an example by more ambitious reductions.

We are much further along in renewable energy development now than we were in Copenhagen in 2009. Last year, more than half of all investments in energy infrastructure went into renewables. The tide is turning.

Matt: That is despite many nations not even having the policies in place to encourage growth of the renewables sector.

Stefan: At the moment, 19% of global electricity supplies are renewable. Renewable energy has been growing exponentially and has now reached a level where it is mainstream. Investment in fossil fuels will probably collapse in the next few years as investors realise they have no future and there will be stranded assets.

Matt: My hope is the business sector will rush away and lead with this. Investment in energy infrastructure isn’t about making a short-term profit; it’s to make money over the next 20 or 30 years. Such long-term investments make it too risky to invest in fossil fuels.

Germany has led Australia on the adoption of renewable energy, despite Australia having far more opportunities. How do you explain that?

Stefan: A British analysis of international media coverage of climate-sceptic misinformation may give a clue. It found the space given to denial of human-caused global warming is a particularly Anglo-Saxon phenomenon. In other countries, like Germany, Brazil and some Asian countries, media reports better reflect the overwhelming scientific consensus on the issue. Back in the 1980s, Australia was actually very enlightened about climate change.

I think we will reach a meaningful agreement in Paris, but it alone will not deliver enough to stay below 2°C.

But the well-funded denial effort has really slowed down progress and polarised the debate here and in Britain, the US and New Zealand. In Germany we have all parties in parliament agreeing to limit global warming to 2°C. They just argue about how to do it and whether the government is doing enough.

Matt: Britain’s leaders recently came out and said this is no longer a political issue. The three parties held a press conference to declare climate change as something that had to be dealt with in a tri-partisan way.

In Australia the fossil fuel sector has been strong and vocal. They have effectively campaigned by getting behind some well-known Australian climate change sceptics. These self-appointed experts can make a lot of money being climate change deniers. They get flown around the world to give talks. Careers that were ending are suddenly revitalised. Stefan’s point about this being an Anglo-Saxon phenomenon is interesting because you also see this in the US.

Stefan: In Europe, we have more public media and you don’t have to be a millionaire to become German Chancellor. You can just be the son of a worker or daughter of a pastor, like Angela Merkel. We don’t have quite as much influence of money in politics.

Where does communicating science end and advocacy begin?

Stefan: There are double standards applied to climate scientists. The term advocate is often used to discredit scientists who speak openly. But when a lung expert recommends not to smoke no one would say: “You are an advocate, I don’t trust you anymore.”

In Bavaria we had a popular vote on new anti-smoking laws and the professional organisation of lung experts actively campaigned. It would be unthinkable for an organisation of climate scientists to get involved in a political campaign in the same way.

Matt: I don’t understand the problem with advocacy. Some years ago, Senator Kim Carr, when he was science minister, held an advocacy forum for scientists across a broad spectrum of disciplines. He more or less said, “I don’t want to hear this ridiculous comment that scientists shouldn't advocate. You are the most expert people across a suite of sectors that impact society. Get out there and tell us what we should be doing. Don't hold back.” We have to advocate for the science. How will people judge us in 100 years time if we don’t get out there to secure a safe climate future?

Finally, there is an argument that geo-engineering can save us from the worst impacts of climate change. Should we be having a conversation about that?

Stefan: No, it is a desperate measure. We have much better alternatives. The whole geo-engineering debate simply makes the general public think there is some kind of technological fix down the line. It is another excuse not to reduce emissions now.

Matt: I completely agree. It shouldn’t be discussed because it ruins the momentum of addressing the problem. Every single geo-engineering technology proposed either has potential impacts that are worse than the original problem, or they are way more costly than decarbonising via renewables. In short, geo-engineering is either too costly, too risky or both. We already have good solutions, it is time to enact them.

Professor Stefan Rahmstorf is visiting UNSW as a guest of the Climate Change Research Centre (CCRC) until March 2016. Named by the Financial Times as one of the top 10 climate scientists in the world, he has been a member of the German Advisory Council on Global Change (2004–2013), an author for the Intergovernmental Panel on Climate Change, and a co-founder of the climate science blog RealClimate – described by Nature as one of the world’s top five science blogs.

Professor Matthew England is equally well known for his science and communications. In 2007 he established the CCRC with UNSW Professor Andy Pitman. Today he is an ARC Laureate Fellow, winner of two Eureka Prizes and a Fellow of the Australian Academy of Science.

Record high to record low: what on earth is happening to Antarctica’s sea ice?