The naturally best breeding window for these endangered animals is shortening, prompting a unique change in behaviour. 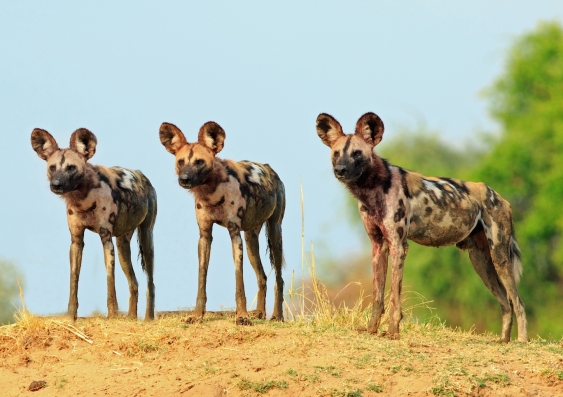 Wildlife are responding and adapting to climate change in various ways. Some adaptations are more obvious. Flowering plants, for example, are blooming sooner each year in parts of the northern hemisphere as climate change draws the onset of spring progressively earlier in the calendar.

Other adaptations are more covert, as we’ve discovered in the case of the African wild dog.

The African wild dog is an endangered large carnivore with a global population of fewer than 700 packs (fewer than 7000 individuals) dotted across the African continent in isolated subpopulations. They typically raise their pups in the cooler months each year. However, our new study shows that they are adapting to warming temperatures by giving birth later each year as they track a shrinking cool period.

By following the fates of 60 packs of African wild dogs in Botswana’s Okavango delta – the largest remaining subpopulation of the species – we learned that the average birthing date now occurs more than three weeks later than it did three decades ago. This shift almost perfectly tracked an average daily temperature increase of 1.6°C over that same period.

On the face of it, our finding that wild dogs are keeping pace with the rate of warming suggests there is no cause for alarm. Pups born in cooler months are more likely to survive, so isn’t this just an effective strategy to cope with a changing climate? Unfortunately not.

As the cooler period of the year is also getting shorter, the net effect of tracking these temperature shifts is that wild dogs are now inadvertently rearing their pups in warmer temperatures.

This is a problem because we’ve also shown previously that higher temperatures following birth affect pup survival rates in Kenya, and our new study shows the same in Botswana.

For the three months of the year, when vulnerable pups remain in the safety of the den, the pack has to commute vast distances between their hunting grounds and the den. It’s possible that the travel costs of these daily meat deliveries explain why fewer pups tend to survive at hotter times of the year. It’s also possible that hotter temperatures affect the dogs’ hunting success. And higher temperatures are also related to lower adult survival. This may be because of factors including the energetic costs of hunting at high temperatures.

Increasing mortality is a big threat for a species like African wild dogs, whose survival relies on its numbers. Indeed pack size is inextricably tied to their survival and success. Fewer pups surviving means fewer future helpers to find food, which results in fewer pups the next year, which in turn results in even fewer helpers – you get the picture.

Moving on is not an option

Unfortunately moving to more suitable environments isn’t an option. African wild dogs are notoriously wide ranging, with single packs occupying home ranges of several hundred to over a thousand square kilometres. Confined to just 7% of their historic range, there is not a lot of room, and people are understandably reluctant to share further space with predators that threaten their livestock.

Indeed people retaliate for stock losses by poisoning and shooting wild dogs, and exposure to disease from domestic dogs contributes further to their decline.

Why this matters for African wild dogs

African wild dogs are stuck in a kind of trap. They are adapting to rising temperatures using a cue that, thanks to climate change, no longer accurately predicts the best conditions for reproduction.

While certainly not the only species to exhibit a climate-driven shift in behaviour, African wild dogs are – to the best of our knowledge – the only large mammalian carnivore where a shift has been documented.

Because monitoring large carnivore populations over several decades is challenging and expensive, such long-term data either don’t exist or have not been assessed for most large carnivores.

Every time we look for an impact of temperature on African wild dogs, however, we uncover something new and unexpected. Climate-driven impacts on large carnivore behaviour, populations and life histories may well be more widespread than previously thought. Because large carnivores play an important role in shaping ecosystems, such impacts have much broader implications.

With continued temperature rises projected across their range, the effects of climate change on this already endangered species – and others like it – are of great concern.

African wild dogs have a feeding queue: why it makes sense