Opinion Climate change doubled the likelihood of the NSW heatwave

Australia's recent heatwave is a taste of what our future will bring unless humans can rapidly and deeply cut our greenhouse emissions, write Sarah Perkins-Kirkpatrick, Andrew King and Matthew Hale. 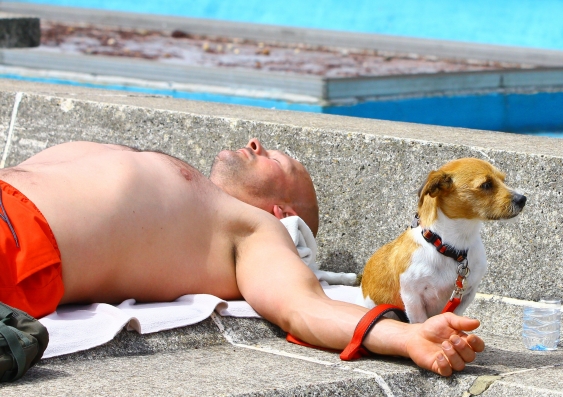 On Saturday 11 February, as New South Wales suffered through the heatwave’s peak, temperatures soared to 47℃ in Richmond, 50km northwest of Sydney. Photo: Shutterstock

OPINION: The heatwave that engulfed southeastern Australia at the end of last week has seen heat records continue to tumble like Jenga blocks.

On Saturday 11 February, as New South Wales suffered through the heatwave’s peak, temperatures soared to 47℃ in Richmond, 50km northwest of Sydney, while 87 fires raged across the state amid catastrophic fire conditions.

On that day, most of NSW experienced temperatures at least 12℃ above normal for this time of year. In White Cliffs, the overnight minimum was 34.2℃, breaking the station’s 102-year-old record.

On Friday, the average maximum temperature right across NSW hit 42.4℃, beating the previous record of 42℃. The new record stood for all of 24 hours before it was smashed again on Saturday, as the whole state averaged 44.02℃ at its peak. At this time, NSW was the hottest place on Earth.

A degree or two here or there might not sound like much, but to put it in cricketing parlance, those temperature records are the equivalent of a modern Test batsman retiring with an average of over 100 – the feat of outdoing Don Bradman’s fabled 99.94 would undoubtedly be front-page news.

And still the records continue to fall. At the time of writing, the northern NSW town of Walgett remains on target to break the Australian record of 50 days in a row above 35℃, set just four years ago at Bourke Airport.

Meanwhile, two days after that sweltering Saturday we woke to find the fires ignited during the heatwave still cutting a swathe of destruction, with the small town of Uarbry, east of Dunedoo, all but burned to the ground. 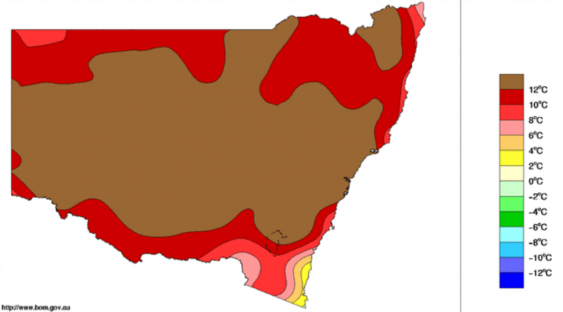 Maximum temperature anomalies across NSW on February 11, the peak of the heatwave. Photo: Bureau of Meteorology, Author provided.

This is all the more noteworthy when we consider that the El Niño of 2015-16 is long gone and the conditions that ordinarily influence our weather are firmly in neutral. This means we should expect average, not sweltering, temperatures.

Since Christmas, much of eastern Australia has been in a flux of extreme temperatures. This increased frequency of heatwaves shows a strong trend in observations, which is set to continue as the human influence on the climate deepens.

It is all part of a rapid warming trend that over the past decade has seen new heat records in Australia outnumber new cold records by 12 to 1.

Let’s be clear, this is not natural. Climate scientists have long been saying that we would feel the impacts of human-caused climate change in heat records first, before noticing the upward swing in average temperatures (although that is happening too). This heatwave is simply the latest example.

What’s more, in just a few decades' time, summer conditions like these will be felt across the whole country regularly.

The useful thing scientifically about heatwaves is that we can estimate the role that climate change plays in these individual events. This is a relatively new field known as “event attribution”, which has grown and improved significantly over the past decade.

Using the Weather@Home climate model, we looked at the role of human-induced climate change in this latest heatwave, as we have for other events before.

We compared the likelihood of such a heatwave in model simulations that factor in human greenhouse gas emissions, compared with simulations in which there is no such human influence. Since 2017 has only just begun, we used model runs representing 2014, which was similarly an El Niño-neutral year, while also experiencing similar levels of human influence on the climate.

Based on this analysis, we found that heatwaves at least as hot as this one are now twice as likely to occur. In the current climate, a heatwave of this severity and extent occurs, on average, once every 120 years, so is still quite rare. However, without human-induced climate change, this heatwave would only occur once every 240 years.

Our results show very clearly the influence of climate change on this heatwave event. They tell us that what we saw last weekend is a taste of what our future will bring, unless humans can rapidly and deeply cut our greenhouse emissions.

Our increasingly fragile electricity networks will struggle to cope, as the threat of rolling blackouts across NSW showed. It is worth noting that the large number of rooftop solar panels in NSW may have helped to avert such a crisis this time around.

We urgently need to discuss the health and economic impacts of heatwaves, and how we are going to cope with more of them in the future.

Our hospital emergency departments also feel the added stress of heat waves. When an estimated 374 people died from the heatwave that preceded the Black Saturday bushfires, the Victorian Institute of Forensic Medicine resorted to storing bodies in hospitals, universities and funeral parlours. The Victorian heatwave of January 2014 saw 167 more deaths than expected, along with significant increases in emergency department presentations and ambulance callouts.

Infrastructure breaks down during heatwaves, as we saw in 2009 when railway lines buckled under the extreme conditions, stranding thousands of commuters. It can also strain Australia’s beloved sporting events, as the 2014 Australian Open showed.

These impacts have led state governments and other bodies to investigate heatwave management strategies, while our colleagues at the Bureau of Meteorology have developed a heatwave forecast service for Australia.

These are likely to be just the beginning of strategies needed to combat heatwaves, with conditions currently regarded as extreme set to be the “new normal” by the 2030s. With the ramifications of extreme weather clear to everyone who experienced this heatwave, there is no better time to talk about how we can ready ourselves.

We urgently need to discuss the health and economic impacts of heatwaves, and how we are going to cope with more of them in the future.

We would like to acknowledge Robert Smalley, Andrew Watkins and Karl Braganza of the Australian Bureau of Meteorology for providing observations included in this article.