Opinion Climate change is testing the resilience of native plants to fire, from ash forests to gymea lilies

Many plants are really good at withstanding bushfires, but the combination of drought, heatwaves and pest insects under climate change may push them to the brink. 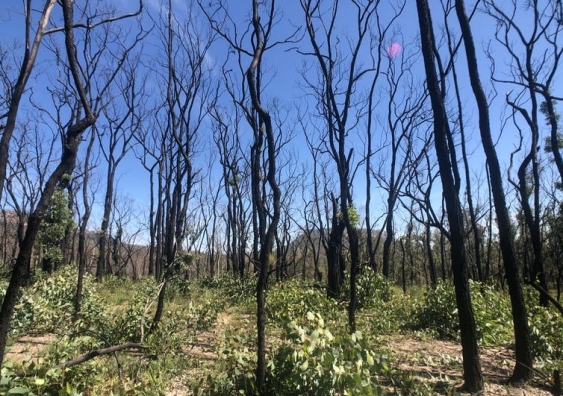 One year following the 2019/20 fires, this forest has been slow to recover. Photo: Rachael Nolan CC BY-NC-ND

Green shoots emerging from black tree trunks is an iconic image in the days following bushfires, thanks to the remarkable ability of many native plants to survive even the most intense flames.

But in recent years, the length, frequency and intensity of Australian bushfire seasons have increased, and will worsen further under climate change. Droughts and heatwaves are also projected to increase, and climate change may also affect the incidence of pest insect outbreaks, although this is difficult to predict.

How will our ecosystems cope with this combination of threats? In our recently published paper, we looked to answer this exact question — and the news isn’t good.

We found while many plants are really good at withstanding certain types of fire, the combination of drought, heatwaves and pest insects may push many fire-adapted plants to the brink in the future. The devastating Black Summer fires gave us a taste of this future. 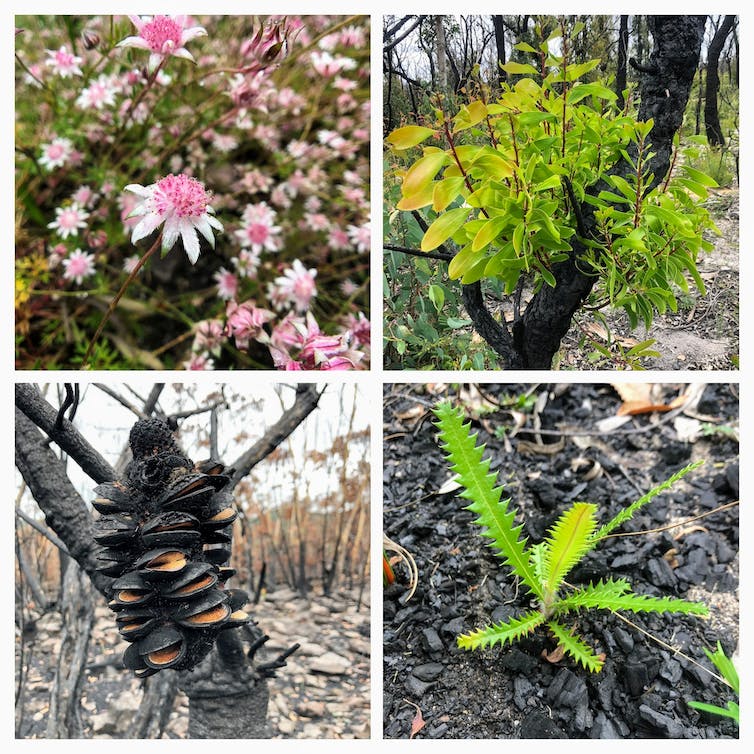 Ash forests are one of the most iconic in Australia, home to some of the tallest flowering plants on Earth. When severe fire occurs in these forests, the mature trees are killed and the forest regenerates entirely from the seed that falls from the dead canopy.

These regrowing trees, however, do not produce seed reliably until they’re 15 years old. This means if fire occurs again during this period, the trees will not regenerate, and the ash forest will collapse.

This would have serious consequences for the carbon stored in these trees, and the habitat these forests provide for animals.

Southeast Australia has experienced multiple fires since 2003, which means there’s a large area of regrowing ash forests across the landscape, especially in Victoria.

The Black Summer bushfires burned parts of these young forests, and nearly 10,000 football fields of ash forest was at risk of collapse. Thankfully, approximately half of this area was recovered through an artificial seeding program.

Ash to ashes: On the left, unburned ash forest in the Central Highlands of Victoria; on the right, ash forest which has been burned by a number of high severity bushfires in Alpine National Park. Without intervention, this area will no longer be dominated by ash and will transition to shrub or grassland. Photo: T Fairman

What happens when fire seasons get longer?

Longer fire seasons means there’s a greater chance species will burn at a time of year that’s outside the historical norm. This can have devastating consequences for plant populations.

For example, out-of-season fires, such as in winter, can delay maturation of the Woronora beard-heath compared to summer fires, because of their seasonal requirements for releasing and germinating seeds. This means the species needs longer fire-free intervals when fires occur out of season.

The iconic gymea lily, a post-fire flowering species, is another plant under similar threat. New research showed when fires occur outside summer, the gymea lily didn’t flower as much and changed its seed chemistry.

While this resprouting species might persist in the short term, consistent out-of-season fires could have long-term impacts by reducing its reproduction and, therefore, population size. 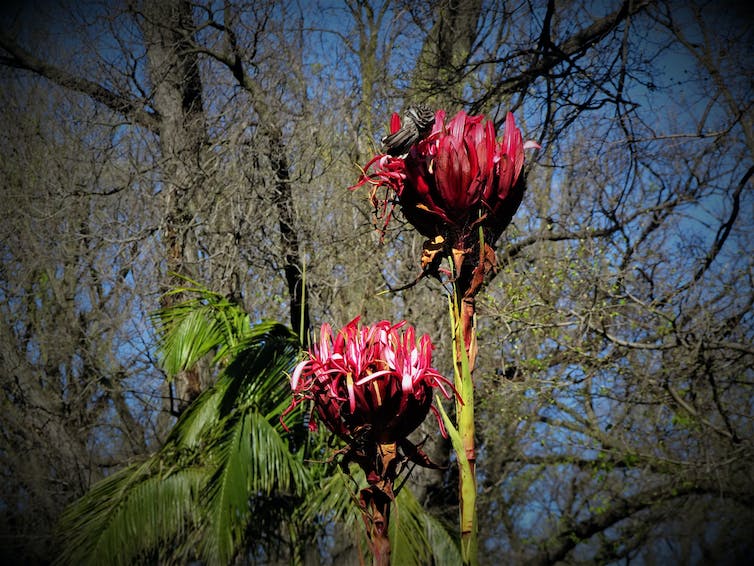 When drought and heatwaves get more severe

In the lead up to the Black Summer fires, eastern Australia experienced the hottest and driest year on record. The drought and associated heatwaves triggered widespread canopy die-off.

Extremes of drought and heat can directly kill plants. And this increase in dead vegetation may increase the intensity of fires.

Another problem is that by coping with drought and heat stress, plants may deplete their stored energy reserves, which are vital for resprouting new leaves following fire. Depletion of energy reserves may result in a phenomenon called “resprouting exhaustion syndrome”, where fire-adapted plants no longer have the reserves to regenerate new leaves after fire. 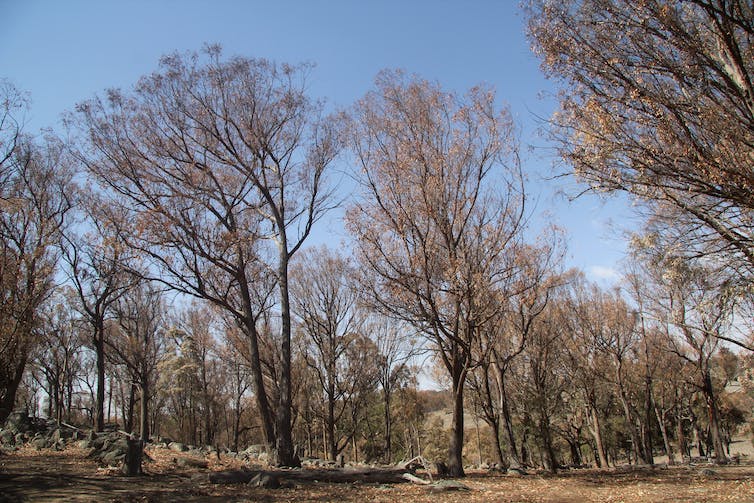 Drought and heatwaves could also be a big problem for seeds. Many species rely on fire-triggered seed germination to survive following fire, such as many species of wattles, banksias and some eucalypts.

But drought and heat stress may reduce the number of seeds that get released, because they limit flowering and seed development in the lead up to bushfires, or trigger plants to release seeds prematurely.

For example, in Australian fire-prone ecosystems, temperatures between 40℃ and 100℃ are required to break the dormancy of seeds stored in soil and trigger germination. But during heatwaves, soil temperatures can be high enough to break these temperature thresholds. This means seeds could be released before the fire, and they won’t be available to germinate after the fire hits.

Heatwaves can also reduce the quality of seeds by deforming their DNA. This could reduce the success of seed germination after fire. 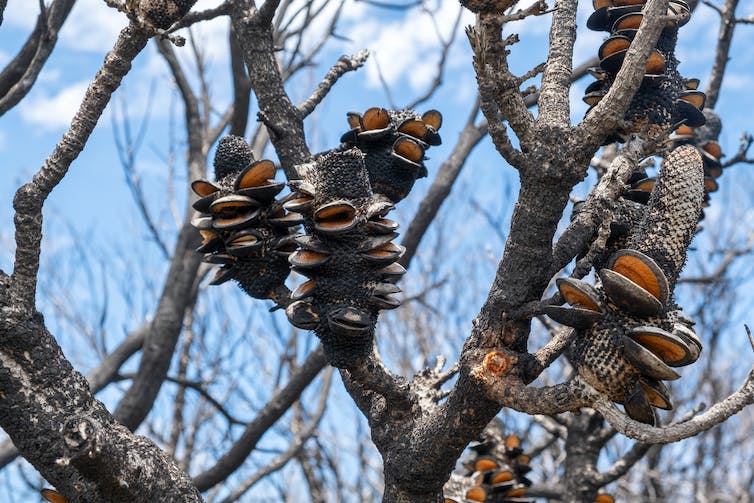 Many native plants, such as banksia, rely on fire to germinate their seeds. Photo: Shutterstock

What about insects? The growth of new foliage following fire or drought is tasty to insects. If pest insect outbreaks occur after fire, they may remove all the leaves of recovering plants. This additional stress may push plants over their limit, resulting in their death.

When threats pile up

We expect many vegetation communities will remain resilient in the short-term, including most eucalypt species.

But even in these resilient forests, we expect to see some changes in the types of species present in certain areas and changes to the structure of vegetation (such as the size of trees). 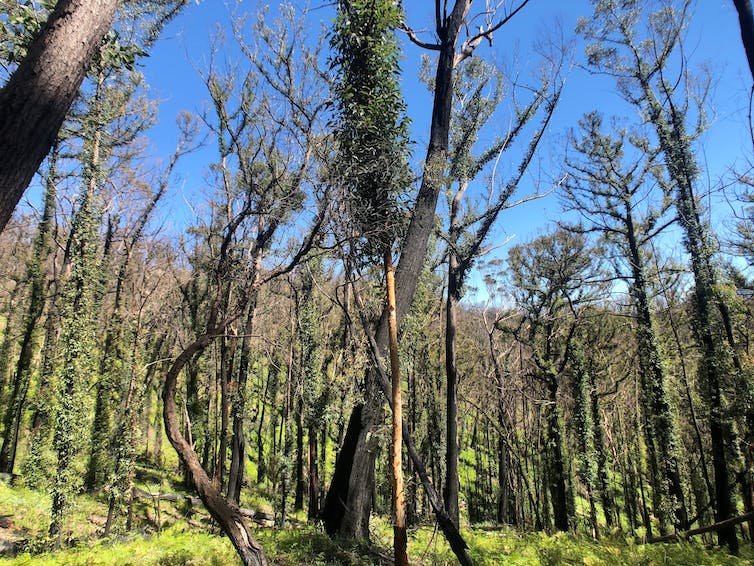 As climate change progresses, many fire-prone ecosystems will be pushed beyond their historical limits. Our new research is only the beginning — how plants will respond is still highly uncertain, and more research is needed to untangle the interacting effects of fire, drought, heatwaves and pest insects.

We need to rapidly reduce carbon emissions before testing the limits of our ecosystems to recover from fire.