How should we be building along the global coast? A framework by UNSW scientists delivers some much-needed answers. 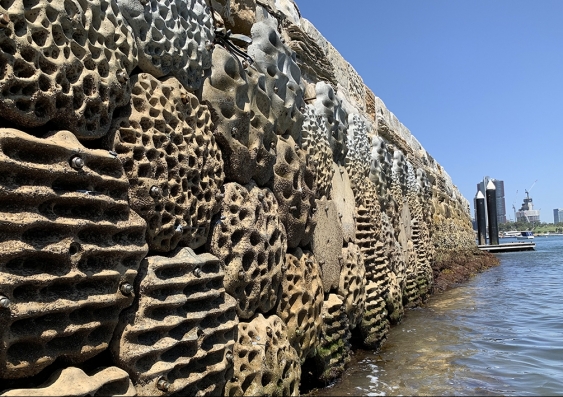 A sea wall with added textures that serve as refuges for intertidal organisms. Picture: UNSW

UNSW scientists have released a world-first framework for guiding the building and management of coastal infrastructure at a global scale. It is hoped that the framework – published today in journal BioScience – will influence decisions in ways that help coastal systems to resist or recover from the impacts of climate change and construction.

“There is great opportunity to improve how we build on the coast,” says lead author Dr Mariana Mayer Pinto from UNSW Science’s School of Biological, Earth and Environmental Sciences.

“More than 40% of the global population live within 100 km of the coast, so coastal ecosystems and biodiversity are arguably the most impacted by the combined effects of climate change and urbanisation.

“Our framework proposes some creative, evidence-based changes to the design of built infrastructure that should increase the overall resistance and resilience of coastal systems.”

“There’s a lack of policy and incentives driving ecologically sustainable development on or below the waterline – often, decision makers are choosing the option that works for navigation or coastal defence, but they’re missing the opportunity to design for nature as well.

“This global framework will help decision makers choose the solutions that help us build healthy coastlines for the future.”

Can we ‘hold back the sea’?

Coastal ecosystems are under threat from climate change: over the past three decades, sea surface temperature and sea levels have risen, and intense storms have become more frequent.

“Coastal defences are now being designed to mitigate climate threats to infrastructure, but they may be causing more damage than good, with significant ecological impacts that are likely to exacerbate current trends in biodiversity loss,” says Dr Mayer Pinto.

“Furthermore, ‘holding back the sea’ using built infrastructure isn’t necessarily cost-effective; approaches focusing on the conservation or restoration of natural ecosystems that buffer the impact of storms, such as coral reefs, oyster reefs, and saltmarshes have, in many instances, proven cheaper and more effective than artificial defence structures.”

Humans are also increasingly building in the sea for purposes such as commercial and residential development, tourism, renewable energy and resource extraction.

“The area occupied by coastal and oceanic infrastructure combined is now greater than Greenland, and the footprint is rapidly increasing,” Dr Mayer Pinto says.

The scientists’ decision-making framework takes into account climate impacts across latitudinal scales – and it incorporates suggestions that are valid for the current climate and future predictions.

“We have two main recommendations for scenarios where we can’t avoid building infrastructure – depending on where in the world we’re talking about, the modifications we suggest are either physical or biological in nature,” Dr Mayer Pinto says.

In lower latitudes – i.e. tropical environments – habitats and communities will become increasingly thermally stressed due to warmer waters. That’s where physical modifications to systems may be preferable.

“Currently, most artificial structures in coastal environments are built for a single purpose, such as coastal protection, tourism, energy or food production. Most of our modifications can help make structures multi-purpose,” Dr Mayer Pinto says.

“For example, standard seawalls are quite flat – so if you retrofit them by adding shaded and well-flushed rock pools, you get water-retaining features that may serve as climate refuge for intertidal organisms, and you can create crevices and ledges that also provide shade.

“In essence, we’re adding complexity to these often featureless artificial habitats, which result in increases in their biodiversity – our Living Seawalls project at Sydney Marine Institute is a great example of that.”

In higher latitudes – more temperate areas – the researchers say environments are experiencing increased biotic stress (i.e. damage done to an organism by other living organisms), due to the global re-distribution of animals and plants that is happening as a result of climatic changes. Tropical species are invading temperate systems, while temperate species are moving into polar systems.

“That’s where we’re looking for designs that emphasise biological interventions, to create a suitable habitat for key species.

“This is actually very similar to gardening – we refer to some of these techniques as ocean gardening. For example, if there’s an invasive species we don’t want in an environment, we try to ‘harvest’ or remove it, and if it’s a species we’d like to see more of because it plays an important ecological role in the ecosystem, we seed or transplant it.”

Dr Mayer Pinto says we need to be aware of which species will be able to survive in these habitats, not only now, but in the near future. We may not be able to retain the local habitat-forming species no matter how hard we try.

“There’s no point in transplanting or seeding a species that is doomed because of increases in sea temperature, for example.”

The scientists say some of these proposed biological modifications, such as assisted migration or assisted evolution, carry risks.

“It is difficult to predict which species may become pests and take over ecosystems, for example – so it's very hard to predict the consequences of some biological modifications. That’s where we have to be careful,” Professor Johnston says.

However, the scientists say that current conservation and management strategies will not be enough to avoid species loss and drastic changes.

Professor Johnston says: “We’re now at a point in global climate change where taking no action is potentially more harmful to coastal ecosystems than intervening based on the best available evidence.

“Unfortunately, we don't have time to research all the possible outcomes, as environments are changing at very high speed, but we can start with small-scale trials, and then use expert evidence and a risk-based approach to re-designing our coastal management and coastal construction.”