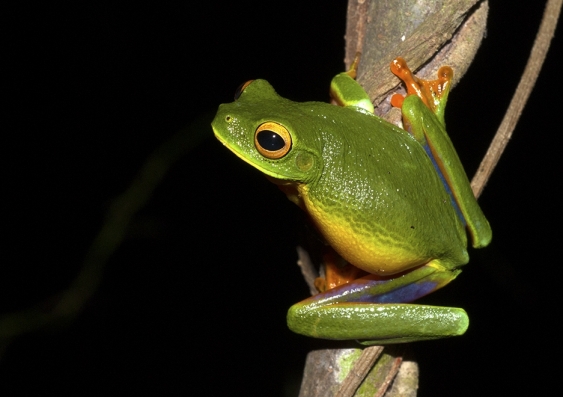 Named Litoria bella, or the Cape York Graceful Treefrog, the striking animal was identified by a team including Dr Jodi Rowley, Curator of Amphibian and Reptile Conservation Biology at the Australian Museum Research Institute and UNSW.

The small frog had previously escaped scientific scrutiny because it had been mistaken for a southern relative called the Graceful Treefrog, which is commonly heard calling after rain in Spring and Summer along the east coast of Queensland and north eastern NSW.

This species was thought to occur as far north as the top of Cape York Peninsula. However, the researchers became suspicious that more than one species was involved, due to the subtle differences between the Cape York frogs and their southern counterparts.

They decided to investigate and compared the appearances, calls and DNA of the two groups. Their study concluding that the frogs on northern Cape York Peninsula are a distinct species is published in the journal Zootaxa.

The known range of the Cape York Graceful Treefrog stretches from Moa Island in the Torres Strait, in the north, to about 20 km south of Coen on Cape York Peninsula, in the south.

The northern-most record of a Graceful Treefrog is 220 kilometres further south, in the Endeavour Valley near Cooktown.

Identification of the new species brings the total number of known frog species in Australia to 239.

“We were also surprised to discover that the new species is more closely related to similar frogs in New Guinea than to its southern relative,” says Dr Rowley, of the Centre for Ecosystem Science in the UNSW School of Biological, Earth and Environmental Sciences.

“The discovery of this little green gem of the frog world is further evidence that we have a long way to go to fully document and understand the amazing biodiversity of northern Australia.”