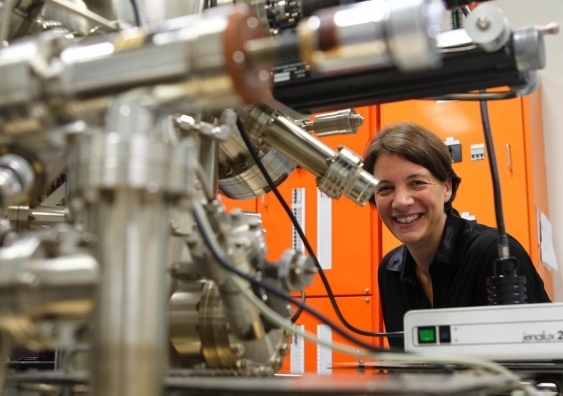 UNSW welcomes the Commonwealth Bank’s $10 million pledge to support the University’s bid to build the world’s first silicon-based quantum computer, following a major government investment in the project this week.

World-leading innovation can happen – and is happening – in Australia.

Led by UNSW Scientia Professor Michelle Simmons, the Centre is leading the global race to build the world’s first quantum computer, a technology the government said would “transform Australian and global business”.

Mr Narev said Professor Simmons’ trailblazing work was proof that “world-leading innovation can happen – and is happening – in Australia”.

“For innovation to thrive there must be collaboration between governments, research institutions, businesses and entrepreneurs,” he said.

“Our investment has a long-term focus and is an example of potential collaboration and commercialisation.”

Professor Simmons was delighted by the announcement, which she said underscored the Commonwealth Bank’s position as a visionary technology leader.

“This investment sends a very powerful message about supporting internationally leading Australian research in areas of breakthrough technology,” she said.

“We are very much looking forward to extending our positive interactions with the bank to secure this technology for Australia’s future.”

UNSW President and Vice-Chancellor Professor Ian Jacobs thanked the Bank for its funding commitment to the Centre’s ground-breaking and globally significant work.

“By working effectively with industry, government and leaders across the entire innovation ecosystem, universities can have a profound impact,” said Professor Jacobs.

We are very much looking forward to extending our positive interactions with the bank to secure this technology for Australia’s future.

Quantum computing in silicon is an entirely new system at the atomic scale and Australia leads the world in single-atom engineering. In the long term, a single quantum computer has the potential to exceed the combined power of all the computers currently on Earth for certain high-value applications including data processing and drug development.

David Whiteing, chief information officer at CBA, said quantum computing would increase the speed and power of computers “beyond what we can currently imagine”.

“This is still some time in the future, but the time for investment is now,” he said.