A reimagining of today’s computer chips by UNSW engineers shows how a quantum computer can be manufactured – using mostly standard silicon technology.

A reimagining of today’s computer chips by Australian and Dutch engineers shows how a quantum computer can be manufactured – using mostly standard silicon technology.

Research teams all over the world are exploring different ways to design a working computing chip that can integrate quantum interactions. Now, UNSW engineers believe they have cracked the problem, reimagining the silicon microprocessors we know to create a complete design for a quantum computer chip that can be manufactured using mostly standard industry processes and components.

The new chip design, published in the journal Nature Communications, details a novel architecture that allows quantum calculations to be performed using existing semiconductor components, known as CMOS (complementary metal-oxide-semiconductor) – the basis for all modern chips.

It was devised by Andrew Dzurak, director of the Australian National Fabrication Facility at the University of New South Wales (UNSW), and Menno Veldhorst, lead author of the paper who was a research fellow at UNSW when the conceptual work was done. 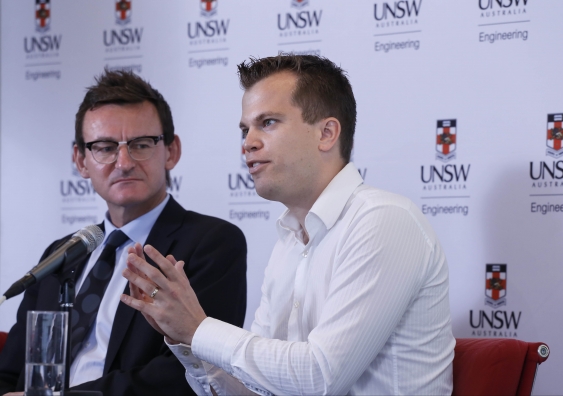 “We often think of landing on the Moon as humanity’s greatest technological marvel,” said Dzurak, who is also a Program Leader at Australia’s famed Centre of Excellence for Quantum Computation and Communication Technology (CQC2T). “But creating a microprocessor chip with a billion operating devices integrated together to work like a symphony – that you can carry in your pocket! – is an astounding technical achievement, and one that’s revolutionised modern life.

“With quantum computing, we are on the verge of another technological leap that could be as deep and transformative. But a complete engineering design to realise this on a single chip has been elusive. I think what we have developed at UNSW now makes that possible. And most importantly, it can be made in a modern semiconductor manufacturing plant,” he added.

Veldhorst, now a team leader in quantum technology at QuTech – a collaboration between Delft University of Technology and TNO, the Netherlands Organisation for Applied Scientific Research – said the power of the new design is that, for the first time, it charts a conceivable engineering pathway toward creating millions of quantum bits, or qubits.

“Remarkable as they are, today’s computer chips cannot harness the quantum effects needed to solve the really important problems that quantum computers will. To solve problems that address major global challenges – like climate change or complex diseases like cancer – it’s generally accepted we will need millions of qubits working in tandem. To do that, we will need to pack qubits together and integrate them, like we do with modern microprocessor chips. That’s what this new design aims to achieve.

“Our design incorporates conventional silicon transistor switches to ‘turn on’ operations between qubits in a vast two-dimensional array, using a grid-based ‘word’ and ‘bit’ select protocol similar to that used to select bits in a conventional computer memory chip,” he added. “By selecting electrodes above a qubit, we can control a qubit’s spin, which stores the quantum binary code of a 0 or 1. And by selecting electrodes between the qubits, two-qubit logic interactions, or calculations, can be performed between qubits.”

A quantum computer exponentially expands the vocabulary of binary code used in modern computers by using two spooky principles of quantum physics – namely, ‘entanglement’ and ‘superposition’. Qubits can store a 0, a 1, or an arbitrary combination of 0 and 1 at the same time. And just as a quantum computer can store multiple values at once, so it can process them simultaneously, doing multiple operations at once.

This would allow a universal quantum computer to be millions of times faster than any conventional computer when solving a range of important problems. 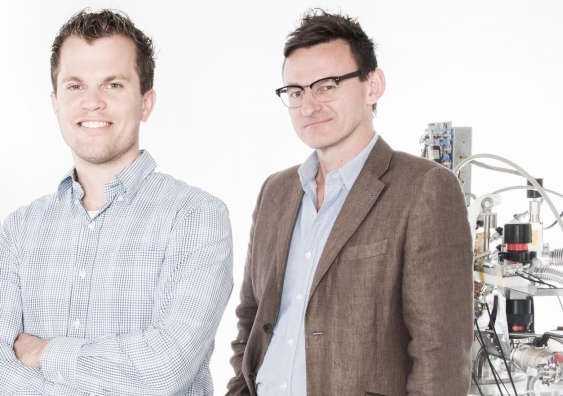 Dr Menno Veldhorst and Prof Andrew Dzurak with some of the instruments they used to test concepts for their design while at the Centre of Excellence for Quantum Computation and Communication Technology.

But to solve complex problems, a useful universal quantum computer will need a large number of qubits, possibly millions, because all types of qubits we know are fragile, and even tiny errors can be quickly amplified into wrong answers.

“So we need to use error-correcting codes which employ multiple qubits to store a single piece of data,” said Dzurak. “Our chip blueprint incorporates a new type of error-correcting code designed specifically for spin qubits, and involves a sophisticated protocol of operations across the millions of qubits. It’s the first attempt to integrate into a single chip all of the conventional silicon circuitry needed to control and read the millions of qubits needed for quantum computing.”

“We expect that there will still be modifications required to this design as we move towards manufacture, but all of the key components that are needed for quantum computing are here in one chip. And that’s what will be needed if we are to make quantum computers a workhorse for calculations that are well beyond today’s computers,” Dzurak added. “It shows how to integrate the millions of qubits needed to realise the true promise of quantum computing.”

Building such a universal quantum computer has been called the ‘space race of the 21st century’. For a range of calculations, they will be much faster than existing computers, and for some challenging problems they could find solutions in days, maybe even hours, when today’s best supercomputers would take millions of years.

Artist's impression of a silicon chip for a spin-based quantum computer. On the top are mostly standard CMOS components; while below that, quantum bits are in operation. (Illustration: Tony Melov)

There are at least five major quantum computing approaches being explored worldwide: silicon spin qubits, ion traps, superconducting loops, diamond vacancies and topological qubits; UNSW’s design is based on silicon spin qubits. The main problem with all of these approaches is that there is no clear pathway to scaling the number of quantum bits up to the millions needed without the computer becoming huge a system requiring bulky supporting equipment and costly infrastructure.

That’s why UNSW’s new design is so exciting: relying on its silicon spin qubit approach – which already mimics much of the solid-state devices in silicon that are the heart of the US$380 billion global semiconductor industry – it shows how to dovetail spin qubit error correcting code into existing chip designs, enabling true universal quantum computation.

Unlike almost every other major group elsewhere, CQC2T’s quantum computing effort is obsessively focused on creating solid-state devices in silicon, from which all of the world’s computer chips are made. And they’re not just creating ornate designs to show off how many qubits can be packed together, but aiming to build qubits that could one day be easily fabricated – and scaled up.

“It’s kind of swept under the carpet a bit, but for large-scale quantum computing, we are going to need millions of qubits,” said Dzurak. “Here, we show a way that spin qubits can be scaled up massively. And that’s the key.” 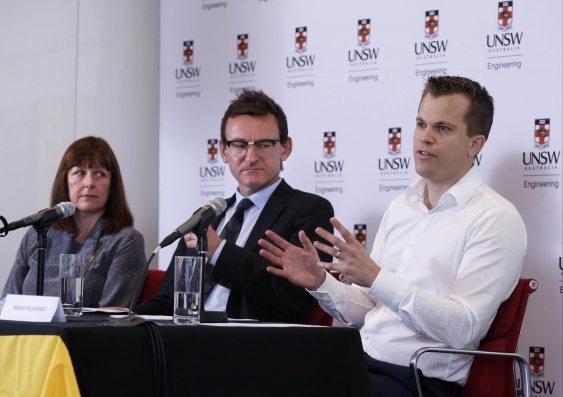 ANFF CEO Rosie Hicks, Prof Andrew Dzurak and Dr Menno Veldhorst describe their concept for the two-quibit logic gate at a news conference in 2015, when they first began to work on the architecture of the new silicon quantum chip.

The design is a leap forward in silicon spin qubits; it was only two years ago, in a paper in Nature, that Dzurak and Veldhorst showed, for the first time, how quantum logic calculations could be done in a real silicon device, with the creation of a two-qubit logic gate – the central building block of a quantum computer.

“Those were the first baby steps, the first demonstrations of how to turn this radical quantum computing concept into a practical device using components that underpin all modern computing,” said Mark Hoffman, UNSW’s Dean of Engineering. “Our team now has a blueprint for scaling that up dramatically.

“We’ve been testing elements of this design in the lab, with very positive results. We just need to keep building on that – which is still a hell of a challenge, but the groundwork is there, and it’s very encouraging. It will still take great engineering to bring quantum computing to commercial reality, but clearly the work we see from this extraordinary team at CQC2T puts Australia in the driver’s seat,” he added.

Other CQC2T researchers involved in the design published in the Nature Communications paper were Henry Yang and Gertjan Eenink, the latter of whom has since joined Veldhorst at QuTech. 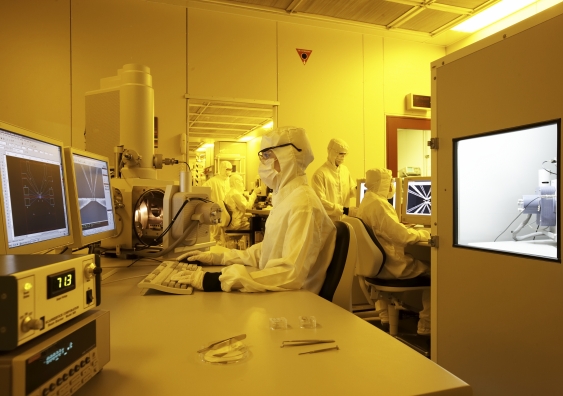 The Australian National Fabrication Facility (ANFF) at UNSW, where the qubits are manufactured.

The UNSW team has struck a A$83 million deal between UNSW, Telstra, Commonwealth Bank and the Australian and New South Wales governments to develop, by 2022, a 10-qubit prototype silicon quantum integrated circuit – the first step in building the world’s first quantum computer in silicon.

In August, the partners launched Silicon Quantum Computing Pty Ltd, Australia’s first quantum computing company, to advance the development and commercialisation of the team’s unique technologies. The NSW Government pledged A$8.7 million, UNSW A$25 million, the Commonwealth Bank A$14 million, Telstra A$10 million and the Australian Government A$25 million.

BACKGROUND ON UNSW’S FACULTY OF ENGINEERING

The Centre for Quantum Computation and Communication Technology (CQC2T) is the world’s largest team working to create a universal quantum computing ecosystem. CQC2T leads the world in the race to build a quantum computer in silicon, and undertakes world-class research in optical quantum computing, quantum communication, quantum interconnects and other quantum technologies. The centre is headquartered at UNSW and comprises more than 200 researchers from nine of Australia’s top research institutions.