Although the ground-dwelling Mountain Pygmy-possum is highly vulnerable to extinction, it can be saved, write Hayley Bates and Haijing Shi. 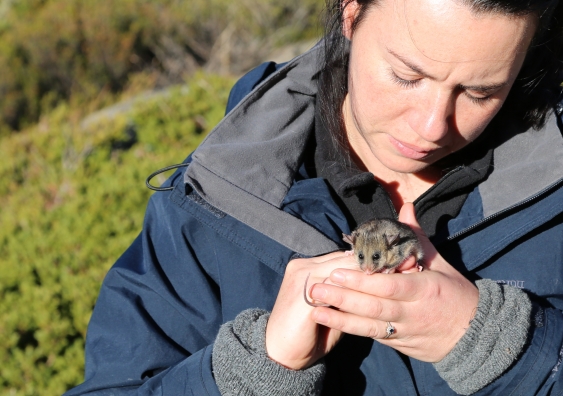 OPINION: The Mountain Pygmy-possum (Burramys parvus) is one of five living species of pygmy-possum, all of which are classified within a single family. It is the largest of the pygmy-possums, and can be easily distinguished from other members of the family by its distinctive “buzz saw” premolar teeth.

Unlike most other possums, it is mainly ground-dwelling, inhabiting alpine and subalpine boulderfields and rocky scree in south-eastern Australia. Males and females spend most of the year separately. Females and their young occupy the best quality habitat.

The Mountain Pygmy-possum is also the only Australian marsupial that hibernates for long periods during the winter. Mating begins in early spring when the possums emerge from their winter sleep.

Up to four young are born. The young grow quickly and are weaned 9-10 weeks after conception. They leave the nest a month later. Most pygmy-possums live for only 1-3 years, however males can live to five years, and females to 12.

The Mountain Pygmy-possum is remarkable in that it was first described from a Pleistocene fossil by Robert Broom in 1896. At the time it was thought to be extinct.

In 1966 a living specimen was discovered in a Ski Club Lodge on Mount Hotham in Victoria. With evidence of only one living animal in existence, the Guinness Book of Records of 1967 recorded the Mountain Pygmy-possum as the rarest animal on Earth.

Surveys later found a number of colonies across the New South Wales and Victorian Alps ranging in elevation from 1200m-2228m above sea level.

Today there are only three known populations: Mount Higginbotham and Mount Buller in Victoria, and Kosciuszko National Park in New South Wales. The total population size is estimated to be less than 2600 adults, restricted to a total range less than 10 square kilometres. It is the only mammal that is entirely restricted to the alpine and subalpine regions of south-eastern Australia.

Only small patches of suitable pygmy-possum habitat remain. Degradation, fragmentation and loss of these remaining refuges are among the immediate threat to the continuing viability of the species. Up to a third of the best breeding habitat has been lost at Mount Buller alone, due to ski resort developments.

How this remaining habitat is connected is essential. Males need to be able to migrate safely to females during the breeding season. Connectivity also maintains the large-scale structure of the population and genetic diversity. However, road and ski slopes have fragmented the landscape.

Increases in temperature will cause significant changes in alpine areas. Specifically higher temperatures will reduce snow depth and the time snow remains on the ground. These processes have a cascade of ecological consequences

Bogong moths are a vital food source for Mountain Pygmy-possums when they awake from hibernation. These moths migrate to the mountains every summer to escape lowland heat. If snow melts early, possums awake from hibernation before the moths arrive in the mountains. The possums then have to compete with other small mammals – such as antechinus and rodents – living in the same habitat. They are forced to leave the boulderfields for other sources of food, exposing them to cats and foxes.

Warming also gives invasive predators a chance to move into areas previously inaccessible. Once the extreme cold kept them out.

A national recovery plan was drafted in 2010 to ensure Mountain Pygmy-possums persist across their range and maintain their potential to evolve in the wild.

Healesville Sanctuary has successfully launched a captive breeding program for the Mountain Pygmy-possum in Victoria. This facility maximises genetic diversity within the populations by carefully selecting mating pairs.

A second captive breeding facility is to be established in Lithgow for the New South Wales population as part of the Burramys Project. The captive population is an insurance policy against natural disaster.

The project aims to gain a greater understanding of how Mountain Pygmy-possums will adapt to climate change by looking to the fossil record. The pygymy-possum family has been found in fossils dating to 24 million years ago.

Although the Mountain Pygmy-possum is highly vulnerable to extinction, it can be saved.

After ten years of severe drought and a drastic decline in possum numbers, rain finally arrived in 2010. Over the last three years we have seen a rise in Mountain Pygmy-possums across New South Wales and Victoria. This growth is attributed to a number of factors including more food and water, genetic diversity through translocations, and pest management.

Recently a critically important discovery was made of a new population of Mountain Pygmy-possums in Kosciuszko National Park. These possums live below the tree line, in an area that receives little snow fall. They may play a key role in understanding how this species will adapt to future challenges.

Hayley Bates is a PhD candidate in the School of Biological, Earth and Environmental Sciences at UNSW. Haijing Shi is a research associate at UNSW.