Warming waters are leading to the ‘tropicalisation’ of temperate reefs: gone are the kelp forests, and local fish populations are responding unexpectedly. 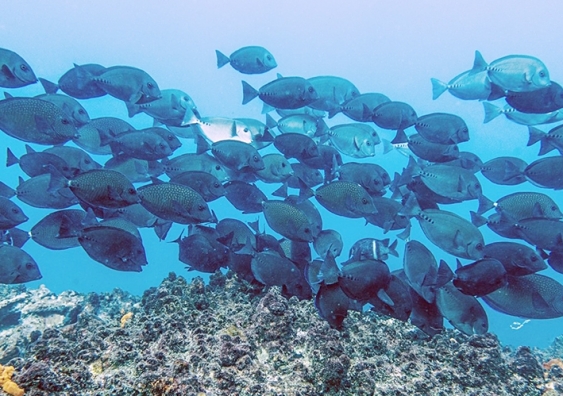 Surgeonfish are tropical fish that have migrated south to the temperate waters of the Solitary Islands. Photo: Adriana Vergés/UNSW

Scientists studying the effects of tropical fish from the north intruding into reefs off the NSW coast have identified the first victims of ‘tropicalisation’ of temperate waters.

But surprisingly, the scientists also found greater diversity and more abundance of fish overall, indicating there are both winners and losers in this global phenomenon attributed to climate change.

In the study published this month in Global Change Biology, scientists from UNSW, University of Sydney and the NSW Department of Primary Industries looked at the diversity of fish populations on the reefs surrounding the Solitary Islands Marine Park off the coast of Coffs Harbour.

They used data from baited underwater video surveys collected over a period of 17 years – between 2002 and 2018 – to analyse changes in the diversity and abundance of marine fishes on the reefs.

Lead author of the study Shannen Smith is a PhD candidate with UNSW’s School of Biological, Earth and Environmental Sciences. She says that as the sea temperatures have warmed, there has been a steady increase of tropical fish venturing into these waters.

“One of the problems with these fish arriving in temperate waters is that they eat a lot of the seaweed,” she says.

“In fact, by 2009, we observed complete kelp loss in this ecosystem, and we weren’t sure what that would mean for the broader fish community.”

The scientists were interested to know how the loss of kelp in the Solitary Islands ecosystem would affect the diversity of the fish. Would the tropical fish continue to thrive? And what would happen to the local fish populations as the main feature of their habitat disappeared? 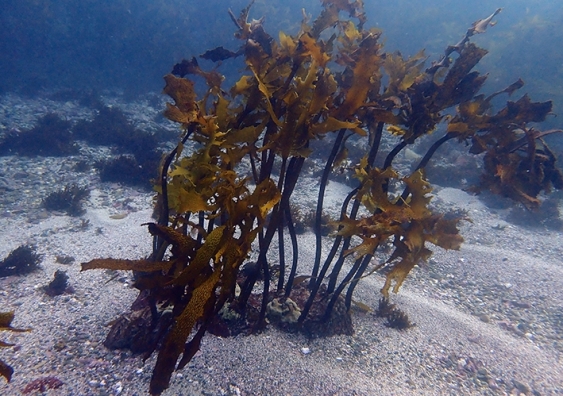 An example of kelp that has been overgrazed following the influx of herbivorous tropical fish in the Solitary Islands. Photo: Adriana Vergés/UNSW

“When we looked at these reefs where extensive kelp loss has been documented, we found that the overall abundance and diversity of fish actually increased,” says Ms Smith.

“This really surprised us. We expected to see cold-water fish species that typically live in kelp forests to decline. We expected too that perhaps tropical invader numbers might plateau, but their abundance continues to increase.”

So could this be a rare, bright spot to emerge from the increasingly gloomy record of ecosystems affected by climate change? The scientists think not, as the raw numbers hide a more complicated story.

While more species of fish were counted on the reefs over the 17 years, three species of local fish native to temperate reefs have substantially declined following the disappearance of the kelp forests.

One such fish, the senator wrasse, is a colourful fish that is synonymous with kelp forest habitat. 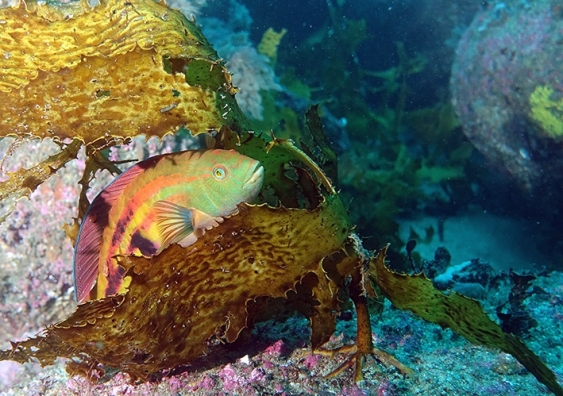 The senator wrasse fish is one of the losers of the tropicalisation of the Solitary Islands. Photo: Adriana Vergés/UNSW

“We think the senator wrasse may be one of the first victims of ‘tropicalisation’,” says study co-author Associate Professor Adriana Vergés

“When you see this fish in the field, you see how strongly associated this animal is with the kelp – it uses it to hide itself away, so intuitively it makes sense that when the kelp disappears, this fish also declines.”

A/Prof Vergés says while the decline in numbers of the senator wrasse (Pictilabrus laticlavius) from the Solitary Islands will not spell the end of this species – as it is found on reefs off the east-Australian coast further south – the influx of tropical fish may be part of an unfortunate homogenisation of species in ecosystems transformed by climate change.

“What we're seeing in our oceans is that everything's starting to look the same. Before, we had tropical systems that were very different to temperate, or colder water systems. But now with the tropical fish coming south, there are less stark differences between the tropical and temperate regions.”

Ms Smith adds some species will be more affected by tropicalisation than others and that they will respond over different time frames.

“Some fishes might be found across more of our coastline while others will become less abundant. So while we see more fish here overall, our study shows that the loss of kelp only has negative effects on temperate and not tropical species” she says. 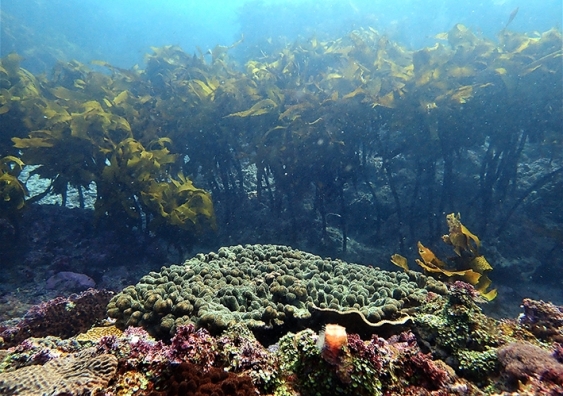 Coral growing on a Solitary Islands reef with a kelp forest in the background. Photo: Adriana Vergés/UNSW

Another detrimental effect of tropicalisation is what the loss of kelp means to carbon levels in the water and in the atmosphere.

A/Prof Vergés explains: “Kelp are photosynthetic organisms that capture carbon out of the atmosphere. So when we lose it, we lose all that carbon capturing capacity of the system.

“The fact that we have more fish in reefs that have lost kelp is partly surprising, and it might be good news for some fishing activities. But we think that globally, this is certainly an alarming phenomenon.”

Not many underwater studies are able to capture the consequences of climate change impacts in such a detailed way, says A/Prof Vergés.

“This is a unique data set because we have fish community data from both before and after kelp was lost.

“It's very rare that you can be a witness to changes in nature of this detail.”

Armed with this data, it might be possible to adapt fish management strategies to prepare for the coming changes to the ecosystem as the warming trend continues.

“Before, we used to manage our coastal ecosystems by trying to protect what was there originally – its ‘pristine’ state,” says A/Prof Vergés.

“With climate change, things are changing so fast that you cannot preserve what used to be there. You really need to understand what's coming up in the next 10 years.”

She suggests that since the invasive tropical fish have been shown to increase in number, new rules and regulations may be needed that focus fishing efforts on these species as a way to protect kelp forest habitat along the broader coastline.

“This kind of study can really help us understand what’s coming in the future, which in turn can help us manage our marine ecosystems in a more dynamic way.” 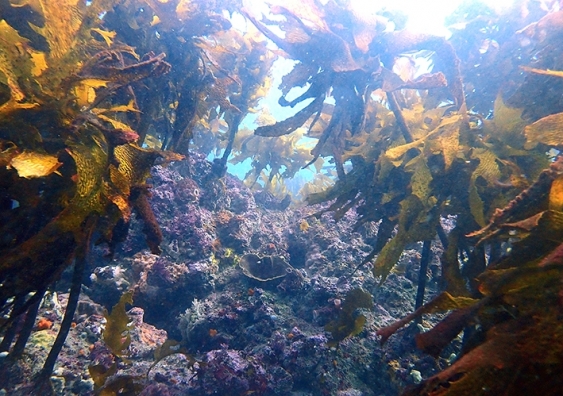 Scientists are unsure whether the kelp forests will return to the reefs of the Solitary Islands. Photo: Adriana Vergés/UNSW