UNSW marine scientists have used a barnacle to develop two equations that can help estimate when and where a local boat may have sunk. 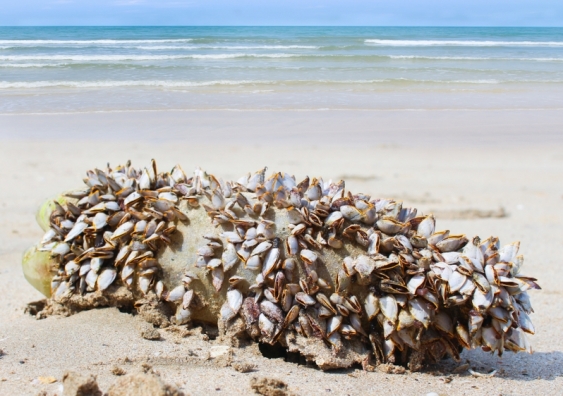 Barnacles are useful for marine forensics, according to research by UNSW Science. Image: Shutterstock.

A common barnacle could be used to help trace missing persons lost at sea, according to research by UNSW Science.

Researchers from the Centre for Marine Science and Innovation have developed an equation that can estimate the minimum time an object has spent drifting at sea by counting the number of Lepas anserifera attached to the object.

They also developed an equation which can help plot possible drift paths of a missing boat.

“We saw this opportunity that Lepas could possibly fill in this gap in that marine forensic process and possibly contribute (to finding missing people),” study lead author Thomas Mesaglio said.

The study, published in Marine Biology, looked at the ecology of the understudied Lepas, a genus of goose barnacles, which are abundantly found on flotsam all around the world.

Goose barnacles are unique as they only attach to floating objects, such as boats.

“This is why they’re generally so difficult to study,” Mr Mesaglio said. “You generally only interact with them after they’ve washed up on the beach. At that point, they’re desiccated or dead.”

The Centre for Marine Science and Innovation scientists monitored the abundance of other species of Lepas, and two amphipod species (crustaceans), on both fixed moorings and free-drifting debris over six months.

They also monitored other biofouling organisms such as crabs and sea slugs that were also settling on the mooring to understand how that community evolved over time.

They developed a new, invaluable equation from this information.

“Let's say a fisherman out on his boat goes missing, but we don't know exactly where or when his boat sank,” Mr Mesaglio said.

“Two weeks later, debris from his boat washes up ashore. We can measure and count the Lepas (as well as counting those other amphipods if present) to give a minimum estimate for how long that debris was drifting.

“We can conduct an isotopic analysis of the Lepas shells attached to a missing boat and reconstruct the sea surface temperature they experienced while attached to the debris,” he said.

“We can then compare this to actual measurements of sea surface temperature (from satellites or moorings) from the broad area the missing fisherman could have been in, and try to match times and temperatures to understand the path the debris may have taken.”

Study co-author Professor Iain Suthers said the new data can also be used to rule out debris that isn’t related to the missing fisherman.

“Say some debris washes up, but we don't know if it's actually from the fisherman’s boat, or another boat,” Professor Suthers said.

“Given we know a maximum possible time since he launched the boat, we can then compare that with the size of any Lepas on the debris.

“If the Lepas are so big that the time required for them to grow to that length exceeds that maximum time he was missing then of course we can say the debris doesn't belong to his boat.”

Prof. Suthers said Lepas are forensically useful for flotsam that was adrift for one to three months.

“Unfortunately for crash investigators, the new, faster Lepas growth rates suggest that the large (36 mm) Lepas found on the missing Malaysian Airline flight MH370 wreckage at Reunion Island – 16 months after the aircraft was believed to have crashed in 2014 – were much younger than previously realised,” he said.

“These Lepas probably settled on wreckage at least halfway across the Indian Ocean, and nowhere near the crash site.”

Mr Mesaglio said the next steps in this research would be conduct further studies on a bigger sample size and in other oceanic regions, such as off the coast of Queensland and Western Australia.

He said it is crucial to understand biofouling community ecology and spatial distributions, so that scientists can track changes in these communities in the future.

“The exponential increase in plastics and other marine debris such as fishing nets in our oceans is creating more habitat and opportunities for biofouling taxa like Lepas to raft across oceans,” Mr Mesaglio said.

“Disasters like the 2011 Japanese earthquake and tsunami facilitated hundreds of marine invertebrate species rafting on debris from Japan all the way to the US coast.”

Read the study in Marine Biology.