Opinion Could opposition to same-sex marriage be about the price of sex?

The battle over same-sex marriage may be, at least in part, about the price of sex, writes Rob Brooks. 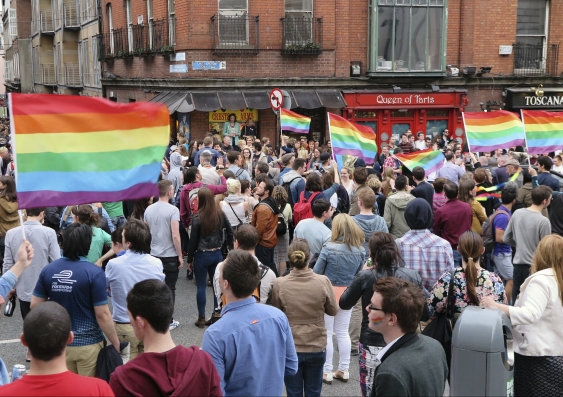 OPINION: Introduce me to an opponent of same-sex marriage, and I will show you a married person. Or someone whose bucket list has “Get Married” right at the very top. The paradox would be delectable if its consequences were not so terribly sad. Why do the devoutest supporters of one-man-one-woman Hopefully Ever Afterness so often oppose admitting the same-sex attracted to an equal bliss?

Bigotry and homophobia, that’s why.

At least according to the voices that populate my Facebook timeline. And watching the recent jockeying by Corey Bernardi and some of his colleagues in the federal government, and the slick Lyle Shelton and his Australian Christian Lobby, I can see why the answer doesn’t get far beyond “bigotry” and “homophobia”.

Compelling as those epithets appear, they provide only a partial explanation. Where do bigotry, homophobia, and notions of “otherness” come from? How do they arise? Well, just as Sydney readies for its most joyous celebration, the Gay and Lesbian Mardi Gras, a new paper in Psychological Science offers some original insight.

Pinsof and Haselton recruited 523 men and 562 women, mostly heterosexual, for their on-line study. Just over a quarter of these subjects report opposing same-sex marriage.

Subjects sat an Implicit Association Test (IAT) which measured whether and how strongly they associate homosexuality with phrases that suggest casual sex, like “hookup” or “one-night stand”, and heterosexuality with words like “loving” and “committed”. The key to an IAT is it measures on a millisecond scale how quickly people make the associations and compares the speed with what happens when subjects have to associate heterosexuality with casual sex, and homosexuality with long-term committed sex. This makes it hard for subjects to fake their answers in favour of the socially desirable response. As Haselton put it in the UCLA press release:

If you have a hard time disassociating ‘gay’ and ‘promiscuous,’ it will take you longer to respond when ‘gay’ and ‘monogamous’ are paired.

They also asked questions to probe subjects' political affiliations, attitudes to gay men and lesbians, their views on marriage, and their attitudes to short-term sex in general. Crucially, from a subject’s scores on the Implicit Association Test, and their answers to questions about homosexuality and promiscuity, Pinsoff and Haselton could predict how strongly they supported or opposed same-sex marriage. Those most invested in one-man-one-woman matrimony were the most likely to associate promiscuity with homosexuality.

The Price of Sex

At first glance one might find this result underwhelming. Conservatism has many manifestations. Two of those might be an enthusiasm for heterosexual marriage and a prejudice about homosexuality, including the stereotype that homosexuals favour uncommitted and short-term sexual liaisons.

But the results present an interesting insight into how the conservative suite of attitudes arise. As Pinsof and Haselton explain, marrying young and raising a large family intensifies the difference between women’s and men’s roles in the family. Women are far more likely to be in carer role, financially dependent on their husbands. And being abandoned by such a husband is far more devastating financially than it would be for a high-earning woman. Likewise a man who works hard to support his family loses far more than a less hard-working husband, at least in evolutionary terms, if a child he thinks is his was actually sired by another man. Traditional gender roles raise the stakes associated with casual and extra-marital sex.

I wrote a while back about a fascinating study showing exactly this effect. When the women in a person’s social circle are stay-at-home mums, both men and women take on more prudish attitudes about sex, judging short-term liaisons more harshly.

Could it be, then, that prejudices about promiscuous homosexuals and an opposition to same-sex marriage share their genesis in a general fear of sexual permissiveness? The idea certainly merits further testing, that we might disentangle the web of cause and effect shaping attitudes to sex and sexuality.

The weight of cultural suppression - all those taboos and manners and sources of guilt that leaden our most joyous urges - can be viewed as devices to raise the price of sex. A body of ideas called “sexual economics” holds that heterosexual sex is a resource exchanged by women, who tend to be more in demand on the mating market, for resources more often controlled by men. The more limited the supply of women interested in sex, and the more abundant the demand from men, the higher the price.

Which is why women bear so much of that suppressive weight: double standards favour those who prefer to fix a higher price of sex. And what price could be higher than promising to love, have, and hold only one, forsaking all others, until death rents the two of you asunder?

To my mind - though Pinsoff and Haselton don’t put it this way - the new findings suggest that the battle over same-sex marriage may be, at least in part, about the price of sex. Same sex marriage, then may be caught in the cross-fire over the price of mostly heterosexual sex. Social conservatives literally believe that extending marriage to homosexual couples will cheapen it. The price they paid when they entered their own, blessed, opposite-sex union will have been undercut. As will the price others will pay to do likewise.

If that is the case then I predict that as the price of heterosexual sex drops for reasons that have nothing to do with homosexuality, for instance as women become more economically independent, we should see opposition to marriage equality wane. That’s certainly consistent with changes to both women’s empowerment and attitudes to homosexuality since the sexual revolution. Likewise if the pattern of formalised same-sex marriages being less likely to end in separation or divorce holds up, the price-based resistance to same sex marriage should wane.

Something as fraught as opposition to homosexuality and homosexual unions is unlikely to have a single cause, and certainly nothing as banal as the price of heterosexual sex. Nonetheless ideas about how such knotty ideological issues arise that can be tested, and improved, or rejected, might prove useful in moving difficult discussions along and understanding where the opposition comes from.

Message from the Chancellor and Vice-Chancellor on marriage equality