A TV documentary about a UNSW-led project that aims to bring an extinct Australian frog back to life will air on ABC TV. 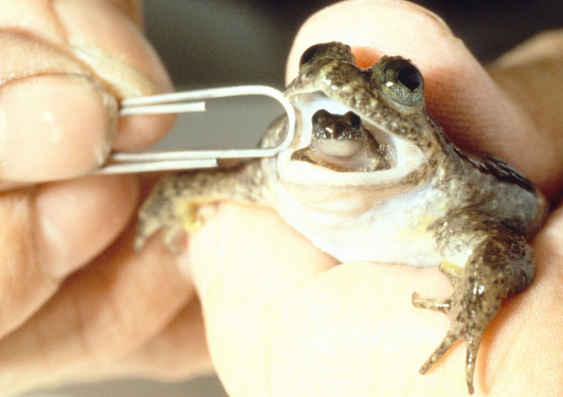 A TV documentary about a UNSW-led project aimed at bringing the Australian Gastric-brooding Frog back to life will air on ABC TV next week.

The hour-long program, Project Lazarus, produced by Visionquest Entertainment, will screen on Tuesday 7 March at 9.30 pm.

In March 2013, UNSW Professor Mike Archer and his colleagues made international headlines when they announced they had succeeded in growing early-stage cloned embryos containing the DNA of the Gastric-brooding Frog, which became extinct in 1983.

Rheobatrachus silus was a remarkable amphibian that swallowed its fertilised eggs, brooded its young in its stomach and then gave birth to baby frogs through its mouth.

The documentary follows the team from the project’s inception in 2005, as they carried out their cutting-edge cloning experiments in a frog laboratory at the University of Newcastle. It includes vision of the embryos that contain DNA from the extinct frog growing in the petri dish, and captures the excitement of the scientists as they realise they have achieved this first big step.

Since the 2013 announcement, the team has been reassessing their techniques and researching developments overseas in a bid to overcome the obstacle of the embryos failing to grow into tadpoles. Cloning experiments can be conducted for only a week a year in summer, due to the breeding cycle of the host frog.

“We are not giving up. We are still hopeful that we will succeed and be able to bring this wonderful frog back to life within a few years,” says Professor Archer. “In fact, we have an ethical responsibility to keep going and to try to undo the harm that we have done in contributing to its extinction.”

To create the cloned embryos, the researchers used cells from a dead Gastric-brooding Frog that had been stored in a conventional freezer in Professor Tyler’s laboratory for 30 years. They then applied a technique called somatic cell nuclear transfer, in which the nuclei of dead cells from the extinct frog were placed into the de-nucleated eggs of a related species of living frog. 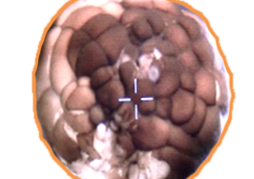 Cloned embryo of the Gastric-brooding Frog containing DNA from the extinct amphibian.

Although none of the frog embryos created in 2009 survived beyond a few days, genetic tests confirmed that the dividing cells contained genetic material from the extinct frog. They also contained some DNA from the host frog in the embryos, so the team members have also been working on how to avoid this by improving the de-nucleation process.

The Lazarus Project has been funded through the generosity of donors, particularly businessmen Dick Smith and Gary Johnston and Professor Shine.