Opinion Despite the funding cut, ARENA’s glass is still half full – here’s how to spend the money

Despite a $500 million cut, the Australian Renewable Energy Agency has survived and can still help drive the renewable energy revolution, write Andrew Blakers and Richard Corkish. 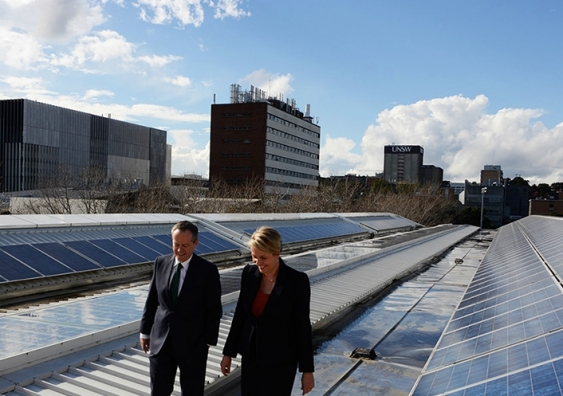 OPINION: The Australian Renewable Energy Agency (ARENA) will suffer a A$500 million funding cut, after being saved from a far worse fate during negotiations over the government’s proposed budget savings package. So does this mean the ARENA funding glass is half full, or half empty?

The 2014 Abbott/Hockey budget aimed to destroy ARENA altogether. Thankfully it was blocked by Labor, the Greens and the crossbench in the Senate. In March this year the Turnbull government claimed to have saved ARENA but intended to divert most of its funds and prevent it from offering grants. The ALP supported that position before the election.

The Greens and Nick Xenophon Team opposed the cuts to ARENA. Labor compromised with the government, allowing A$500 million to be diverted elsewhere and leaving ARENA with A$800 million over the next five years.

The axe that previously hung over ARENA’s granting process has been lifted. So to answer the earlier question, our glass is now half full, because substantial funding will still flow to renewable energy R&D, this time with bipartisan political backing which hopefully confers greater funding stability. But it is also half empty, because clean energy innovation has taken another huge cut.

Two weeks ago, some 200 Australian solar energy researchers signed a letter of support for ARENA, amid a groundswell of community support for the agency – not just here but from abroad too.

Australian solar energy R&D is held in very high regard within the international community. Nearly 300 overseas scientists, engineers and company executives signed a petition calling on Australia’s parliamentarians not to axe grants for renewable energy research, innovation and education. Many included complimentary comments, such as:

The Australian renewable energy program is an international treasure. It would be a disaster worldwide for the Australian government to end the program. These are world-renowned scientists.

For decades Australian scientists have been world leaders in the critical area of renewable energy research and development … the legacy of Australia’s great scientific contributions must be saved and their future excellent work supported.

The ARENA funding program has helped Australia lead the world in photovoltaics for decades, which enabled the worldwide economic boom from manufacturing and installing solar panels.

I have been involved in solar research for 35 years in the United States. Solar technology, including advances made at UNSW and ANU in Australia, have made [a] great impact on the world’s energy infrastructure.

Australia has some of the finest PV research on the planet and has been an inspiration to us all.

Where next for ARENA?

ARENA’s role is to support a rapid transition to renewable energy. So what should it do with its reduced funding of A$800 million over the coming five years?

Given that energy use accounts for three-quarters of Australia’s greenhouse gas emissions, with the electricity sector the biggest contributor, the fastest way to make deep cuts to emissions is to accelerate the introduction of renewable energy into the electricity system. This is the route successfully pioneered by the ACT government, which will reach 100% renewable electricity by 2020.

Other important energy goals will be to electrify road vehicles and trains, and to encourage the use of electric heat pumps in place of natural gas for building heating and hot water systems.

Reducing the emissions from other sectors such as shipping, aviation and high-temperature industries will be more difficult. But these sectors are less important in terms of overall emissions, and if we can push ahead with decarbonising electricity, transport and heating, that will give us more time to devise low-cost solutions for these remaining sectors.

It is important for ARENA to provide strong support at the grassroots level; help universities support undergraduate, postgraduate and postdoctoral training as well as research itself. These young people are the future of research, education, engineering and start-up companies.

Consistent grant support for new companies allows entrepreneurship to flourish, encouraging bright people in universities to commercialise their ideas. With the right backing, these people can often cycle back and forth through universities, completing a virtuous circle.

Efficient silicon cells have been by far the greatest success story of Australian renewable energy research. With silicon cells now making up 95% of the worldwide solar market and likely to dominate for at least the next decade, improving their efficiency still further should be a prime research focus.

ARENA’s new large-scale solar energy program announced last weekrepresents an outstanding success: A$92 million of ARENA funding has leveraged A$1 billion of investment to construct 0.5 gigawatts of solar farm capacity in three states. Another A$100 million to bring the total capacity to 1GW would give this nascent industry a great start.

Soon PV and wind will constitute more than half of annual generation in many states and regions, and so attention has to be paid to managing their variability. Options include detailed integration studies, demand management, mass storage (using both the 99% market leader pumped hydro and the newcomer, batteries), and high voltage powerlines to move energy between regions – all of which will benefit from ARENA support.

It is time for all politicians to recognise that the faster we move to renewable energy, the cheaper it will be to cut emissions and adapt to climate change. ARENA has an important role to play in a rapid and sustained shift to renewable energy – and we look forward to a doubling of ARENA funding before the next election.