Excavator, farmer, matchmaker: echidnas provide a host of benefits to nature. So let's harness the potential. 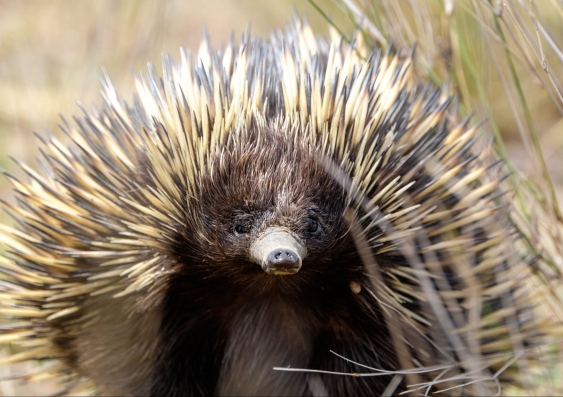 After 200 years of European farming practices, Australian soils are in bad shape – depleted of nutrients and organic matter, including carbon. This is bad news for both soil health and efforts to address global warming.

The native Australian echidna may hold part of the solution. Echidnas dig pits, furrows and depressions in the soil while foraging for ants. Our research has revealed the significant extent to which this soil “engineering” could benefit the environment.

Echidnas’ digging traps leaves and seeds in soil. This helps improve soil health, promotes plant growth and keeps carbon in the soil, rather than the atmosphere.

The importance of this process cannot be underestimated. By improving echidna habitat, we can significantly improve soil health and boost climate action efforts. 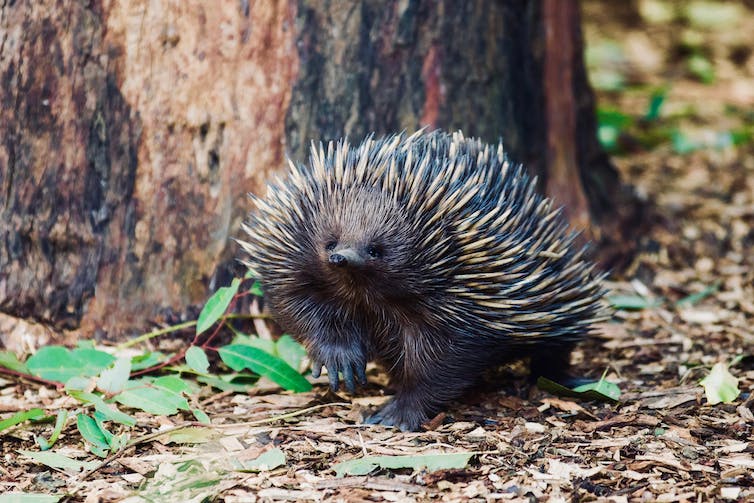 Many animals improve soil health through extensive digging. These “ecosystem engineers” provide a service that benefits not only soils, but plants and other organisms.

In Australia, most of our digging animals are either extinct, restricted or threatened. But not so the echidna, which is still relatively common in most habitats across large areas of the continent.

Soil depressions left by echidnas can be up to 50cm wide and 15cm deep. When ants are scarce, such as at highly degraded sites, echidnas dig deeper to find termites, making even larger pits. 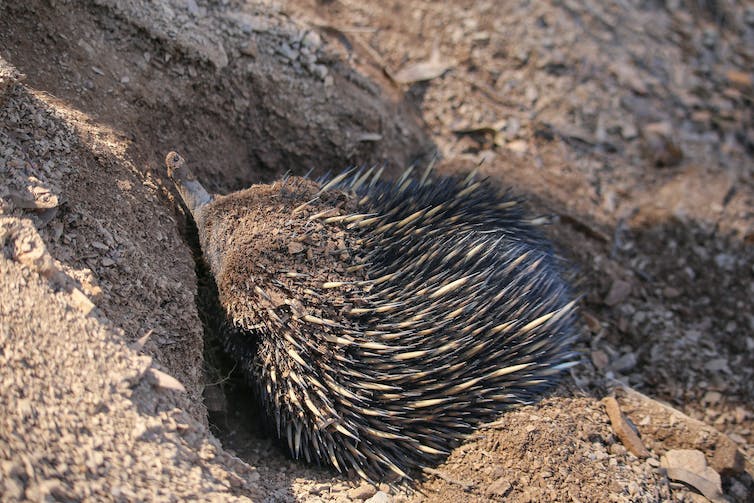 For seeds to germinate they must come together with water and soil nutrients. Our experiment showed how echidna digging helps make that happen.

We tested whether seeds would be trapped in echidna pits after rain. We carefully marked various seeds with different coloured dyes, and placed them on the soil surface in a semi-arid woodland near Cobar, NSW, where we’d dug pits similar to those echidnas create. We then simulated a rain event.

Most seeds washed into the pits, and those that started in the pits stayed there. The experiment showed how echidna pits encourage seeds, water and nutrients to meet, giving seeds a better chance to germinate and survive in Australia’s poor soils.

The recovering pits then become plant and soil “hotspots” from which plants can spread across the landscape.

It’s no wonder many human efforts to restore soil imitate the natural structures constructed by animals such as echidnas.

Read more: Curious Kids: How does an echidna breathe when digging through solid earth? 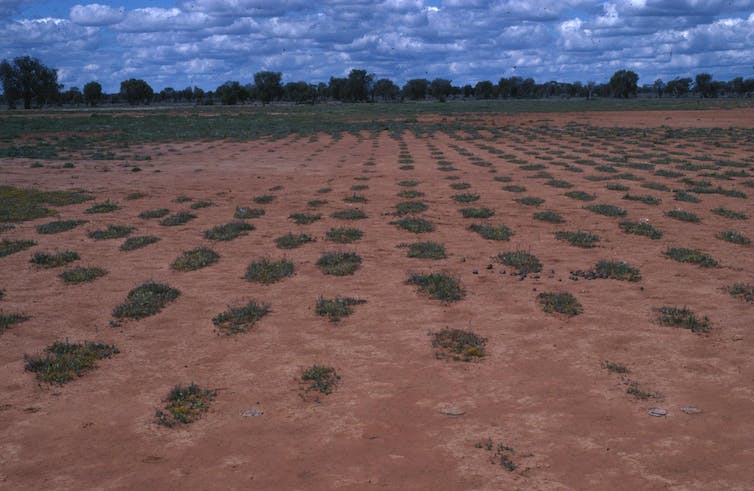 This does not happen immediately. Our research suggests it takes 16-18 months for carbon levels in the pits to exceed that in bare soils.

This entire process of echidna digging, capture and buildup creates a patchwork of litter, carbon, nutrients, and plant hotspots. These fertile islands drive healthy, functional ecosystems – and will become more important as the world becomes hotter and drier.

Read more: The secret life of echidnas reveals a world-class digger vital to our ecosystems 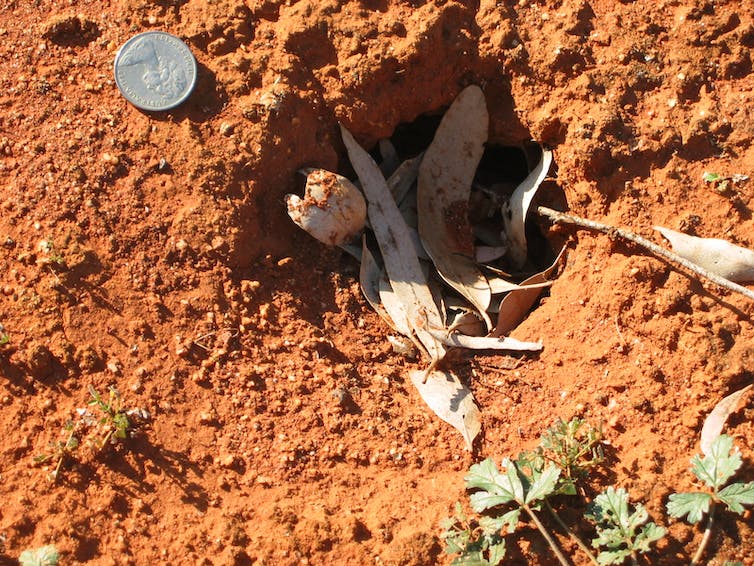 An echidna foraging pit with litter, seed and soil.

Harness the power of echidnas

Soil restoration can be expensive, and impractical across vast areas of land. Soil disturbance by echidnas offers a cost-effective restoration option, and this potential should be harnessed.

Echidnas often shelter in hollow logs, so removing fallen timber reduces their habitat and feeding sites. Restrictions on practices such as firewood removal are needed to prevent habitat loss.

And being slow-moving, echidnas are often killed on our roads. To address this, shrubs and ground plants should be planted between patches of native bush, creating vegetation corridors so echidnas can move safely from one spot to the next. 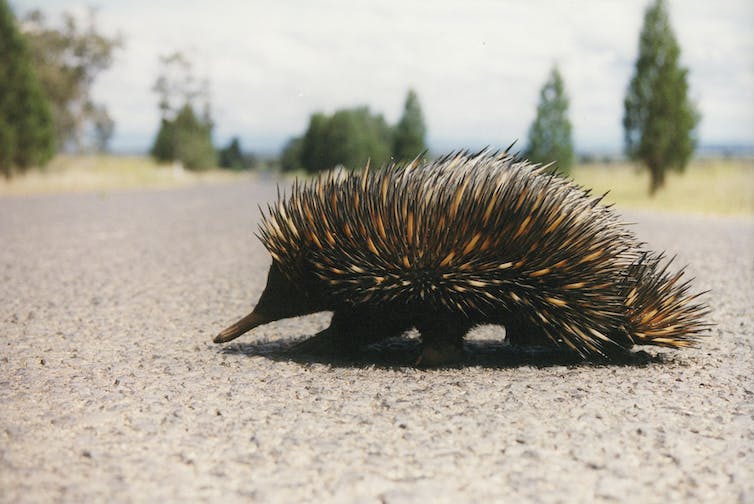 Why did the echidna cross the road? Because there were no vegetation corridors. Photo: Shutterstock

And while an echidna’s sharp spines give it some protection from natural predators, they’re less effective against introduced predators such as foxes and cats. So strategies to control these threats are also needed.

The health of Australia’s fragile environment is in serious decline. Echidnas are already providing a valuable ecosystem service – and they should be protected and nurtured to ensure this continues.

Read more: 10 million animals are hit on our roads each year. Here’s how you can help them (and steer clear of them) these holidays

Looking out for waterbirds from high above