A comparison of conditions on either side of Australia’s dingo fence has revealed that extermination of these apex predators affects not only the abundance of other animals and plants, but also the quality of the soil. 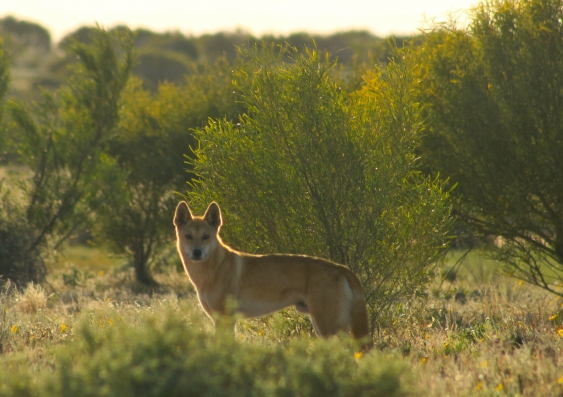 A comparison of conditions in the outback on either side of Australia’s dingo fence has revealed that extermination of these apex predators affects not only the abundance of other animals and plants, but also reduces the quality of the soil.

The UNSW study indicates greater control of kangaroo numbers is needed across a third of the Australian continent where dingoes are rare, to reduce damage on ecosystems.

“We have shown for the first time that the presence of dingoes is linked to healthier soils, because they suppress the numbers of kangaroos that graze on the vegetation,” says study senior author UNSW Associate Professor Mike Letnic.

The research by Associate Professor Letnic and his honours research student Timothy Morris is published in the journal Proceedings of the Royal Society B. 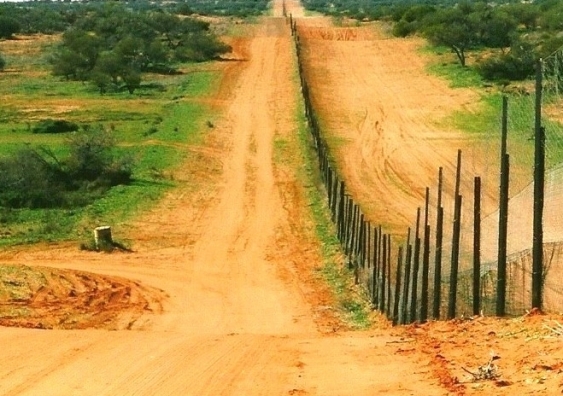 The dingo fence was erected more than a century ago to keep dingoes out of eastern Australia, and extends approximately 5600 kilometres across the states of South Australia, New South Wales and Queensland.

Dingoes are common on the western side of the fence, but rare on the other side, due to intensive control measures including poisoning, trapping and shooting over many decades. This latter area includes most of NSW and Victoria, and southern Queensland and southern South Australia.

“The fence provides a unique opportunity to test the effects of the removal of an apex predator on herbivore abundance, vegetation and nutrients in the soil,” says Mr Morris.

The researchers studied four sites – a national park site and a pastoral site on each side of the fence in the Strzelecki Desert. They drove along outback dirt tracks at night over a period of four years to count dingoes and kangaroos. They also collected dingo scats to determine what they ate, and measured levels of phosphorus, nitrogen and carbon in the soil. 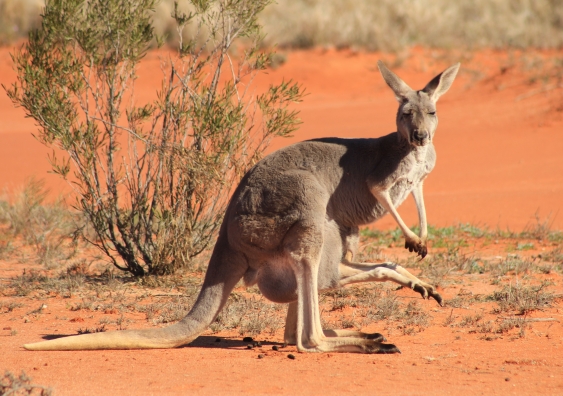 A kangaroo and joey in outback Australia Image: Anna Normyle

The researchers also found that where dingoes were rare, overgrazing by large numbers of kangaroos reduced the vegetation cover and led to lower levels of phosphorus, nitrogen and carbon in the soil, compared with areas where dingoes were common.

“Our novel finding goes against the conventional wisdom that apex predators like dingoes have little impact on soil,” says Associate Professor Letnic.

“We show that removal of dingoes leads to a trophic cascade that extends right down to the depletion of soil nutrients. Allowing dingo populations to increase could enhance the productivity of ecosystems across vast areas of the country by reducing herbivore numbers.

“We need to rethink the idea that kangaroos have benign impacts on ecosystems. Kangaroo numbers are very high across the approximately one third of the continent where dingoes are rare, and are having damaging impacts on soils and vegetation.

“Some of our national parks are at risk of becoming kangaroo ‘farms’. We need to be pragmatic about reducing kangaroo numbers so as to reduce their impact on ecosystems,” he says.

Herbivores can influence soil quality by reducing vegetation cover, which reduces leaf litter and accumulation of soil nutrients, as well as allowing water and wind to wash and blow away more topsoil. In turn, poor soil leads to reduced vegetation growth.