Dingoes play a key role in the conservation of Australian outback ecosystems by suppressing feral cat populations, a UNSW Sydney study has found. 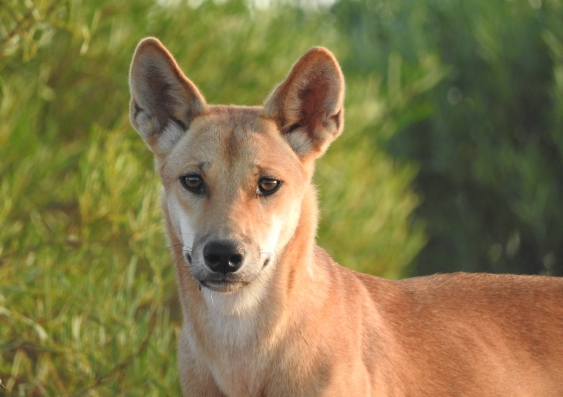 A UNSW Sydney study has ended an argument about whether or not dingoes have an effect on feral cat populations in the outback, finding that the dingoes do indeed keep the wild cat numbers down.

In a paper published recently in Ecosystems, the researchers compared dingo and feral cat populations either side of the world’s longest fence that also doubles as the border between South Australia and New South Wales.

The fence was erected in the 1880s to in an attempt to keep dingoes from attacking sheep flocks in NSW and Queensland.

With a very small number of dingoes on the NSW side of the fence and much larger number on the SA side, the fence offered a perfect opportunity to observe feral cat numbers in identical environments with and without the influence of dingoes.

Professor Mike Letnic from the Centre for Ecosystem Science, UNSW School of Biological, Earth and Environmental Sciences, says that over the course of a six year study – between 2011 and 2017 – he and his fellow researchers compared the numbers of dingoes, cats and their major prey species either side of the dingo fence in the Strzelecki Desert.

“We collected dingo scat and cat scat and analysed them to compare diets, while we also used spotlight searches to record numbers of each as well as two of their common food sources – rabbits and hopping mice,” he says.

“In our spotlight searches, dingoes were pretty much absent from the NSW side of the fence, with only four spotted in our six years of study. We also observed on this side that feral cats fluctuated as their prey numbers fluctuated.

“But on the SA side, where dingoes were common, the cat numbers were consistently lower.” 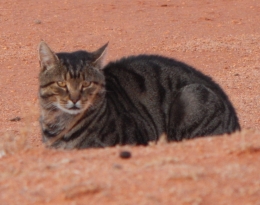 Feral cats have been linked with the extinction of at least 20 mammal species. Picture: Prof Mike Letnic

“In fact, the feral cats had basically disappeared by the end of 2015 and we went for a two year stretch without seeing any,” Dr Feit says.

“We think the cat population took a dive because of interference competition – either from dingoes actually preying on cats, or by scaring them completely away from the same hunting ground.”

The authors say that while the scat analysis showed that the dingoes and cats eat similar foods, there wasn’t any evidence to suggest that competition for food was a major factor in how dingoes reduce cat populations. On the contrary, prey remained plentiful on the SA side of the fence, suggesting that dingoes had a direct, rather than incidental effect on the numbers of feral cats.

Feral cats are a serious conservation threat and have been linked with the extinction of at least 20 mammal species in Australia and threaten the ongoing survival of more than 100 native species.

The authors believe their study shows that dingoes play a key role in the conservation of Australian outback ecosystems by suppressing feral cat populations. Their work adds to previous studies that found dingoes help conservation efforts by keeping numbers of introduced red foxes, feral goats and feral pigs in check while also keeping kangaroos from overpopulating in certain areas.

The authors recently published an article about their work on The Conversation.