UNSW scientists have added to the growing body of research into genetic markers that are important for animal conservation. 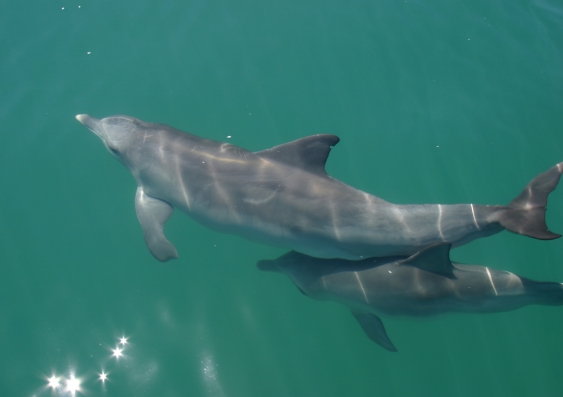 Certain types of immune genes may be particularly important for the survival of dolphins, a new study by an international team of researchers that investigated genetic diversity of dolphin populations reveals.

Knowing which genes are essential for helping dolphin populations survive has important implication for conservation: it is often difficult to monitor changes in population sizes of wild animal populations, especially long-lived dolphins, who spend most of their time under water. This also makes it hard to detect whether these populations are threatened - so identifying genes that are essential for survival could offer an indicator for potential threats to the viability of populations.

“Genetic diversity is crucial for animals to adapt to a changing environment – for example, diverse genes can help populations defend against diseases and tolerate climate change – but not all genetic diversity is equally important”, says lead author Dr. Oliver Manlik, who is an Assistant Professor at the United Arab Emirates University and conjoint faculty member of UNSW Science.

Until recently, most studies that assessed genetic diversity in wild animals used ‘adaptively neutral’ genetic markers that don't offer any clues as to whether animals can adapt to a changing environment. Adaptively neutral genetic markers are gene variants that usually do not have any particular function, and are neither beneficial nor harmful to individuals or populations. Such genetic variants are, therefore, not so important for adaptation or survival.

“In order to identify genetic variants that are necessary for animals to adapt and to survive, it is important to focus on genes that are linked to ecologically important traits,” Dr. Manlik says.

“One such group of genes are the immune genes of the major histocompatibility complex (MHC), which play a critical role in recognizing pathogens and starting an immune defense.”

In their new study, published in the international journal Ecology and Evolution, the scientists compared ‘adaptively neutral’ genetic diversity and genetic diversity of MHC genes in two bottlenose dolphin populations in Western Australia. One of the two dolphin populations, in Shark Bay, was previously assessed to be stable. In contrast, the other, much smaller population near Bunbury was forecast to decline, unless it is supported by immigrants from other populations nearby. This was shown in two previous studies, which were also led by Dr. Manlik.

“On the other hand, there was almost no difference between the two populations with respect to neutral genetic diversity.”

Professor Michael Krützen at the University of Zurich and co-author of the study says the Shark Bay dolphins, which carry greater immunogenetic diversity than their counterparts off Bunbury, are likely more robust to natural or human-induced changes to the coastal ecosystem.

“In other words, having greater MHC diversity may offer extra protection to these dolphins, but certainly does not make them invincible to the many threats they face.”

The findings of the study also suggest that MHC diversity could be a useful indicator of population ‘health’ of these dolphins and possibly other vertebrates who also have MHC genes.

Professor Bill Sherwin from UNSW, who supervised the study, says the results should be interpreted with caution, given the team only compared two populations.

“However, our results add to a growing number of studies that underscore the usefulness of MHC as a potentially suitable genetic marker for animal conservation.”

“If we want to identify genetic indicators for wildlife conservation, we should monitor adaptive genes, such as MHC genes, that are important for adaptation and survival of populations,” Dr. Manlik concludes.

Looking out for waterbirds from high above