Subsidising electric cars and rolling out more chargers could help Australia achieve half of our new car sales to be electric by 2030. 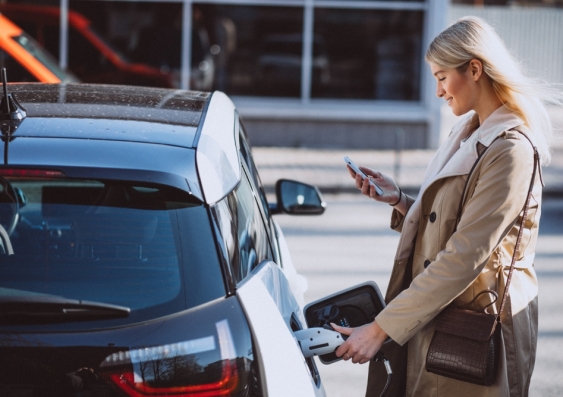 The authors say that Australia’s EV adoption continues to sit stubbornly near the bottom of the league table compared to other countries, with 0.75% of new car sales being EVs. Photo: Shutterstock.

Passenger cars contribute 10 per cent of Australia’s emissions, and emissions are growing thanks to our continuing love affair with utes and SUVs, and our population growth.

To turn that around, current rates of electric vehicle [EV] adoption need to increase exponentially.

We believe that half of new car sales should be electric by 2030 if the passenger car sector is to reach net-zero emissions by 2050.

But compared to other OECD countries, Australia’s EV adoption continues to sit stubbornly near the bottom of the league table, with 0.75 per cent of new car sales being EVs.

On the flipside is Norway, which had EVs being three-quarters of new car sales in 2020, followed by Iceland with half of new sales and Sweden at a third of new sales.

So, what can be done to overcome the obvious hurdles such as the need for charging infrastructure to service our vast continent, the much higher purchase price of EVs versus fossil-fuelled cars, and a lack of choice and availability?

We suggest there are cost-effective solutions with policies governments could adopt to address Australian motorists’ concerns and encourage EV sales.

Crucially, government spending could be justified and there would be savings in other areas of the economy such as health costs and from fuel import reductions.

The most important action governments could take is to support and invest in the roll out of enough rechargers to ensure there is an adequate supply of public chargers as the fleet of electric vehicles grows.

Without that support, in addition to any private investment, one third of motorists would be unlikely to swap their fossil-fuelled car for an EV.

Under such a scenario Australia could not reach net-zero emissions for passenger vehicle transport by 2050.

Vehicle affordability is the second way to encourage EV sales, whether new or used.

One way of attracting motorists as quickly as possible is expanding the second-hand EV market.

Subsidising purchases of new EVs could increase the pool of second-hand electric vehicles more quickly, increasing vehicle availability to those who want to go electric but can’t afford to buy new.

While it may seem unfair that governments should support new EV sales, doing so would increase those who could make the switch while the market is in its infancy.

Another concern is if you can’t access a private parking space with a power point.

Off-street parking means you could charge at home, making recharging easy and convenient.

About three-quarters of Australian motorists have indicated they could do so.

But suppose you can’t access a handy source of electricity.

In that case you’d probably prefer a nearby destination charger, so that you can recharge when you are doing something else, like when your car is parked overnight.

This could include people living in blocks of flats without power points in the car parks or living in suburbs built before the advent of motor cars.

Most Australian motorists travel less than 100km a day most of the time, and the average is less than 35 kilometres per day for passenger cars.

The other common myth surrounds coping when you go on longer trips than the car’s battery can provide, no matter what the vehicle range is.

Fast chargers are needed at regular intervals on major highways and in country towns for these trips, so your car’s battery can be quickly topped up while taking a short rest break.

Government support for infrastructure could be decreased over time as private investment becomes more profitable.

Still, it would be essential to ensure remote areas and other unprofitable locations, are provided for.

Also, it would be necessary to install additional rechargers when electric vehicles become common.

Otherwise in popular locations queue anxiety could start to replace range anxiety, as is now starting to occur in Norway, the world’s leading EV nation.

In our research, where we developed various scenarios, we found that supporting vehicle purchase until 2030, then tapering down to 2040 gave a better result than suddenly stopping support in 2030, where sales fell off a cliff, taking a decade to recover.

The same effect has been observed in Denmark, when a change of government meant support was withdrawn, and flip flopping the re-introduction of policies spooked the market.

Just think, by making a transition to EVs we could have tangible well-being benefits, which outweigh any costs.

We would have quieter roads and fewer particulates in the air, improving everyone’s health, and reducing health costs as a bonus.

Not only that, but we could also have lower fuel import bills.

Last year we spent over $21 billion on refined petroleum, and the money the federal government spends on fuel subsidies, could come down.

And by transitioning to proven technologies, emissions for passenger cars could reach net-zero by 2050.

Now we just have to make sure that all levels of government get in the driver’s seat and take us all along for the ride.