A big-eared native mouse declared extinct in NSW after not being seen for more than 80 years has been found at the UNSW Fowlers Gap Arid Zone Research Station near Broken Hill. 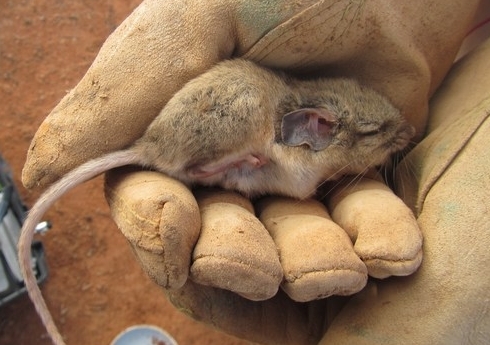 A big-eared native mouse declared extinct in NSW after not being seen for more than 80 years has been found at the UNSW Fowlers Gap Arid Zone Research Station near Broken Hill.

A young female of the species Pseudomys australis – commonly known as the plains mouse – was caught by UNSW scientists surveying for small mammals on the property, which is the only research station in the arid zone of NSW.

“It was very exciting to come across an animal we thought had gone for good in this state,” says UNSW biologist Dr Keith Leggett, who found the mouse with his UNSW Science honours student, Thanuri Welaratne.

“NSW has a dreadful record of extinctions of native mammals, and the reappearance of the plains mouse shows the benefit of carefully maintaining the conservation areas we have at Fowlers Gap,” says Dr Leggett, who is director of the research station.

The identity of the native mammal was confirmed by scientists including UNSW biologist Associate Professor Mike Letnic, who has caught them in the South Australian desert where they still occur in small numbers.

“The plains mouse is quite distinctive looking. It is one of the largest rodents in the arid zone and has relatively big ears and big feet,” says Associate Professor Letnic.

Native rodents play an important role in the Australian ecosystem, but since European settlement many species have declined dramatically in numbers and range, or become extinct.

“The decline is thought to be largely due to introduced predators such as red foxes and feral cats – particularly in areas where foxes flourished because they had lots of rabbits to feed on,” says Associate Professor Letnic.

“Overgrazing by sheep, cattle, kangaroos and goats has also probably contributed to the reduction in native rodents by degrading their habitats.

“The plains mouse in particular has disappeared from huge areas of the continent, so the find at Fowlers Gap is very unusual and great news.

“It may suggest they are recovering due to a decrease in the number of rabbits following the introduction of the calicivirus in the late 1990s. Fowlers Gap also has very few foxes, due to intensive controls on their numbers there,” says Associate Professor Letnic.

Dr Leggett and his colleagues have been surveying for small mammals at the research station for the past six years. Captures are recorded and then the animals are quickly released back into the wild.

Last year, a suspected male plains mouse was found in the same ungrazed conservation area of the property by UNSW Emeritus Professor Terry Dawson and Dr Steve McLeod of the NSW Department of Primary Industry, but it was not formally identified.

“This second capture and positive identification confirms their existence at Fowlers Gap, which is a pretty big deal,” says Dr Leggett.

The last recorded sighting of the plains mouse in NSW listed in the Atlas of Living Australia was in 1932, from the Liverpool Plains.

Fowlers Gap is used by scientists from UNSW and other local and international institutions for a wide range of studies on birds, kangaroos, reptiles, other flora and fauna, soil conservation and groundwater management.

Some areas of the 39,000-hectare property have been continuously monitored for 50 years, providing a unique ecological record that earned the station a place on the Register of the National Estate in 1996.

Artists are also attracted to the dramatic landscape at the station, which has several artists’ retreats.