Fasten your seatbelts: roads should have lanes for autonomous vehicles 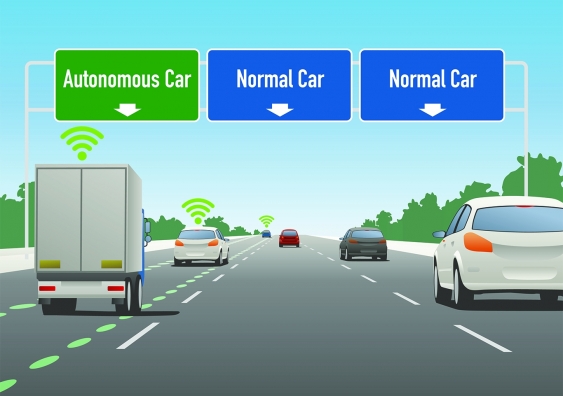 Similar to bus and T2 lanes, UNSW expert says we should have dedicated lanes for autonomous vehicles on the freeway. Image: Shutterstock

While we may have to wait a little longer for fully automated flying cars, the future of automated vehicles is not far away.

High end models of existing vehicles in the market, such as Tesla, already have adaptive cruise control features. This means the vehicles have autopilot hardware to drive by themselves without any input from the driver and are fitted sensors to detect when objects are too close.

The next stage of automation will be for the vehicles to communicate and interact with each other. But what will that mean for cars that are not automated?

Published in the Journal of Transportation Research Part C: Emerging Technologies, a study by engineers from UNSW proposes a freeway network design with exclusive lanes for autonomous vehicles.

Lead author Dr Shantanu Chakraborty from UNSW School of Civil and Environmental Engineering, says that if the road and transport network is not prepared for these vehicles when they enter the market, it will significantly hinder the travel experience of all road users.

"Traffic congestion costs the economy billions of dollars every year in all the extra time spent commuting. The proposed model will help minimise interaction with legacy vehicles and reduce overall congestion on the road," says Dr Chakraborty.

“The mix of autonomous vehicles and legacy vehicles will cause issues on the road network unless there is proper modeling during this transition phase. If we get caught out and we’re not ready, we won’t reap the full benefits of the technology behind these autonomous vehicles."

Adding an exclusive lane for autonomous vehicles means removing a lane from legacy drivers – so this may cause a little disruption, he says.

“If you look at our existing network, we already have something similar with dedicated bus lanes – so we’re not reinventing the wheel here.

“Freeways are also the best network of car lanes to trial as they have dedicated entry and exit points where drivers can automatically switch on and off their automated features.”

Autonomous vehicles not only have the potential to provide cost-effective mobility options, but road users can reap the benefits of reduced congestion.

Dr Chakraborty says road users can activate the autopilot features of their vehicles while they are in these exclusive lanes. The automation of movement of the vehicles means the flow of traffic would significantly improve in these lanes as drivers are not solely relying on their attention and reaction time to traffic conditions.

“Say you’re sitting in traffic and the traffic light turns green, the driver doesn’t instantaneously take off that second; there is usually a response time before you press on the pedal and the car moves,” he says.

“Then the driver behind you reacts and so forth and by this stage, there has been some time passed.

“However, with autonomous vehicles, the movement is more coordinated because the vehicles are fitted with sensors. When the signal turns green, all the vehicles move simultaneously which will improve traffic flow and reduce congestion.

“I believe, this is the future of mobility.”

Stay in your lane

“Our modelling accounts for changing traffic conditions. For example, during non-peak hour times when we don’t need a lane for autonomous vehicles, we can have all lanes open for legacy vehicles," he says.

“Due to the minimal infrastructure, our proposed model also has the potential to design ramp metering for freeway networks to help regulate the flow of traffic during peak hour.”

But how do we ensure drivers of legacy vehicles don’t misuse the new lane system?

“Similar to existing high-occupancy lanes, for example, transit lanes or T2 or T3 lanes, we can apply a fine when drivers of legacy vehicles enter lanes dedicated for autonomous vehicles," he says.

“Like any other road rules, we can only trust that drivers obey the signs and road rules.”

Human-centred design is key to reducing distraction on roads