UNSW researchers fear another major tremor could be on its way in Nepal after satellite images revealed the Earth’s displacement after last month's earthquake was much less than expected. 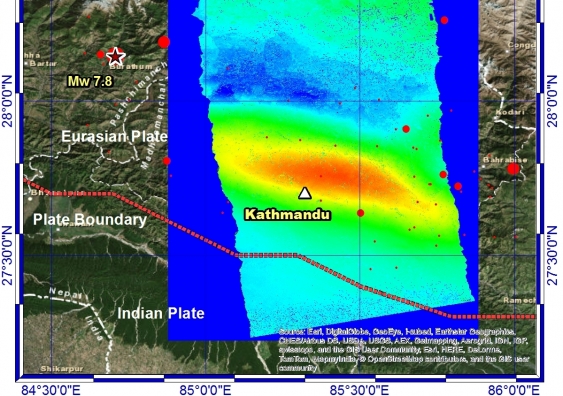 A Japanese ALOS-2 satellite image of Nepal after the earthquake, overlaid on an image of the region taken in February. The red area indicates the peak displacement, while the red spots mark aftershocks. The epicentre is starred.

UNSW researchers fear another major earthquake could be on its way in Nepal after satellite images revealed the Earth’s displacement after the 7.8 quake on 25 April was much less than expected.

Satellite images show peak ground deformation of about 1.37m occurred near Kathmandu, rather than the earthquake’s epicentre 81km away.

Associate Professor Linlin Ge, from UNSW’s School of Civil and Environmental Engineering, said with an earthquake of this magnitude, the ground displacement should have been much higher, prompting fears the stress that caused the earthquake may not be fully released.

“It should be roughly several metres. According to our preliminary analysis the fault line running through the region is still not ruptured and sooner or later the built up strain will have to be released, which is of great concern."

Associate Professor Ge compared the event in Nepal to the magnitude 8.0 quake in Sichuan, China, in 2008, where displacement of up to 6.7m was reported.

"The images provide crucial information as disaster response agencies assess slope stability in the region and the vulnerability of residential areas to secondary disasters such as landslide and floods," Associate Professor Ge said.

The ground deformation was determined using radar images captured from the Japanese ALOS-2 satellite during a 20 second pass over Nepal on 2 May. This was compared with an image of the region taken before the quake on 21 February. 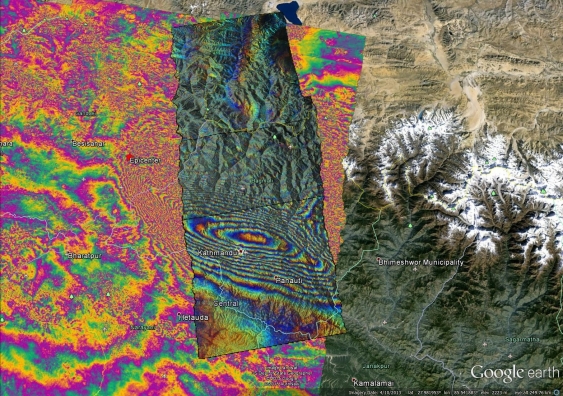 The image from Japan's ALOS-2 satellite sits over the image from the European Space Agency's Sentinel-1A satellite, showing the extent of displacement caused by the quake.

Associate Professor Ge's team used both the ALOS-2 and European Space Agency (ESA)’s Sentinel-1A satellite to map the displacement caused by the quake.

He said both satellites worked by measuring the difference between the Earth's surface and the satellite, so were able to be used to compare changes in terrain.

Associate Professor Ge pioneered the technique in the wake of the 2008 Sichuan quake and said it could be further refined if researchers had access to even more satellites passing over the area.

"As more radar satellites become available in the near future, this intelligence could be provided to emergency agencies within a few hours of the main shock of an earthquake."

Two years after the earthquake, why hasn't Nepal recovered?