In a huge galactic archaeology project, astronomers have revealed the “DNA” of more than 340,000 stars in the Milky Way, which should help them find the siblings of the Sun, now scattered across the sky. 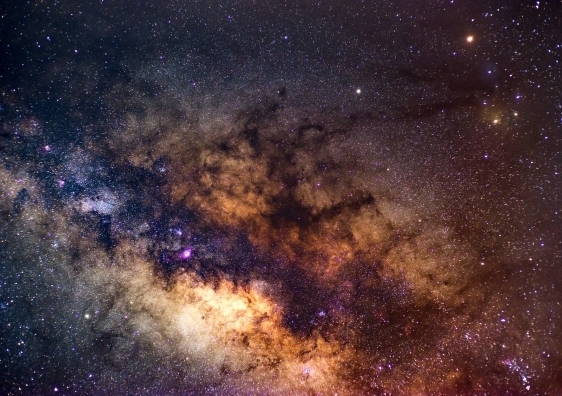 An Australian-led group of astronomers working with European collaborators has revealed the “DNA”, or spectra, of more than 340,000 stars in the Milky Way, which should help them find the siblings of the Sun, now scattered across the sky.

UNSW scientist Dr Sarah Martell leads the survey observations for the ambitious galactic archaeology project called GALAH, which was launched in late 2013 as part of a quest to uncover the formulation and evolution of galaxies.

When complete, GALAH will have investigated more than a million stars, and today makes its first major public release of data. The GALAH survey used the HERMES spectrograph at the Australian Astronomical Observatory’s (AAO) 3.9-metre Anglo-Australian Telescope near Coonabarabran in NSW to collect spectra for the 340,000 stars.

The information gathered traces the ancestry of stars, showing astronomers how the Universe went from having only hydrogen and helium just after the Big Bang to being filled with all the elements present now on Earth that are necessary for life.

Dr Martell, from the UNSW School of Physics, says the Sun, like all stars, was born in a group or cluster of thousands of stars.

“Every star in that cluster will have the same chemical composition, or DNA. These clusters are quickly pulled apart by our Milky Way Galaxy and are now scattered across the sky,” she says.

“The GALAH team’s aim is to make DNA matches between stars to find their long-lost sisters and brothers."

Dr Gayandhi De Silva, of the University of Sydney and AAO - the HERMES instrument scientist who oversaw the groups working on today’s major data release - says: “No other survey has been able to measure as many elements for as many stars as GALAH.

“This data will enable such discoveries as the original star clusters of the Galaxy, including the Sun's birth cluster and solar siblings. There is no other dataset like this ever collected anywhere else in the world,” Dr De Silva says.

For each star, the DNA represents the amount they contain of each of nearly two dozen chemical elements such as oxygen, aluminium, and iron.

Astronomers, of course, cannot simply collect the DNA of stars with mouth swabs, but instead collect starlight, using a technique called spectroscopy.

The light from the star is collected by the telescope and then passed through an instrument called a spectrograph, which splits the light into detailed rainbows, or spectra. 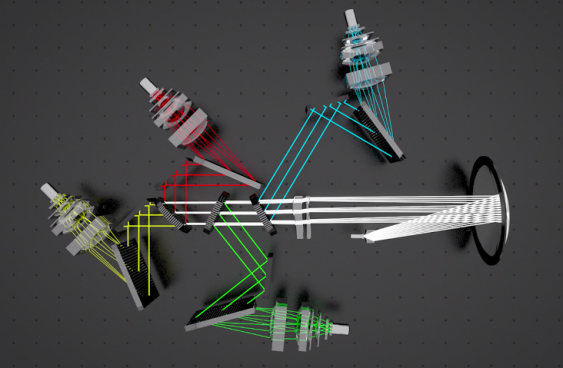 A schematic of the HERMES instrument showing how star light from the telescope AAT is split into four different channels. Credit: The Australian Astronomical Observatory.

Associate Professor Daniel Zucker, from Macquarie University and the AAO, says astronomers measure the locations and sizes of dark lines in the spectra to work out the amount of each element in a star.

“Each chemical element leaves a unique pattern of dark bands at specific wavelengths in these spectra, like fingerprints,” he says.

Dr Jeffrey Simpson of the AAO says it takes about an hour to collect enough photons of light for each star: “Thankfully, we can observe 360 stars at the same time using fibre optics,” he says.

The GALAH team has spent more than 280 nights at the telescope since 2014 to collect all the data.

The GALAH survey is the brainchild of Professor Joss Bland-Hawthorn from the University of Sydney and the ARC Centre of Excellence for All Sky Astrophysics in 3 Dimensions (ASTRO 3D) and Professor Ken Freeman of the Australian National University (ANU).

It was conceived more than a decade ago as a way to unravel the history of our Milky Way galaxy. The HERMES instrument was designed and built by the AAO specifically for the GALAH survey. Measuring the abundance of each chemical in so many stars is an enormous challenge. To do this, GALAH has developed sophisticated analysis techniques.

PhD student Sven Buder of the Max Planck Institute for Astronomy, Germany, who is lead author of the scientific article describing the GALAH data release, is part of the analysis effort of the project, working with PhD student Ly Duong and Professor Martin Asplund of ANU and ASTRO 3D.

Mr Buder says: “We train [our computer code] The Cannon to recognise patterns in the spectra of a subset of stars that we have analysed very carefully, and then use The Cannon’s machine learning algorithms to determine the amount of each element for all of the 340,000 stars.“

Ms Duong says: “The Cannon is named for Annie Jump Cannon, a pioneering American astronomer who classified the spectra of around 340,000 stars by eye over several decades a century ago. Our code analyses that many stars in far greater detail in less than a day.”

The GALAH survey’s data release is timed to coincide with the huge release of data on 25 April from the European Gaia satellite, which has mapped more than 1.6 billion stars in the Milky Way, making it by far the biggest and most accurate atlas of the night sky to date.

In combination with velocities from GALAH, Gaia data will give not just the positions and distances of the stars, but also their motions within the Galaxy.

Professor Tomaz Zwitter of the University of Ljubljana in Slovenia says today’s results from the GALAH survey will be crucial for interpreting the results from Gaia: "The accuracy of the velocities that we are achieving with GALAH is unprecedented for such a large survey," he says.

Dr Sanjib Sharma from the University of Sydney says: “For the first time we’ll be able to get a detailed understanding of the history of the Galaxy.”