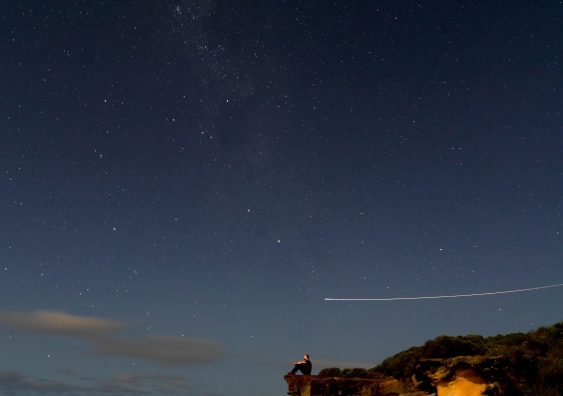 Thousands of years before British settlers arrived in Australia, a fireball lit up the Central Desert, blasting a series of craters into the blood-red sands with atomic force. The local Luritja people described it as a fire-devil seeking vengeance for a breach of sacred law, and the site – now known as the Henbury Meteorite Conservation Reserve – was declared taboo.

A detailed account of the event was handed down through more than 200 generations– a period of some 4,700 years – before western science described the site in 1931.

“There are similar stories in Aboriginal traditions across Australia of fiery stars falling from the sky, producing a deafening sound, blowing debris across the land and setting the ground on fire,” says Hamacher, an astrophysicist. In some instances Aboriginal stories led to the discovery of an actual meteorite, according to a paper Hamacher has published in the latest edition of the journal Archaeoastronomy.

It’s a phenomenon that extends beyond the heavens, with Aboriginal stories about tsunamis, earthquakes and volcanic eruptions also dating back tens of thousands of years.

“By merging scientific data with descriptions in oral tradition we can show that many of the stories are accounts of real-life events. So Aboriginal stories could lead us to places where natural disasters occurred.”

For example, volcanic eruptions created a series of rainforest-cloaked crater lakes in Queensland more than 10,000 years ago. Local Aboriginal legend describes an explosion in the area felling tall eucalypts. Pollen sampling has revealed the stories are accurate. The rainforest was only 7,000 years old – prior to the eruptions the area was eucalyptus scrub.

In Portland, Victoria, the local Gunditjmara people tell of a giant wave of water roaring inland, sparing only the people who took refuge on the mountaintop. Hamacher says the area is known to be prone to tsunamis, and core drilling has revealed a thick layer of ocean sediment, which is now undergoing geochemical analysis.

Even in modern times, folklore about natural disasters has been central to the survival of Indigenous peoples. When the 2004 Boxing Day tsunami swept across South-East Asia, little hope was held for the people of the Andaman Islands because they didn’t have an early warning system.

Rescuers were astonished to find most islanders had survived because traditional lore dictated that when the ocean receded, you should head for higher ground. The one group who had suffered heavy casualties had been converted to Christianity and had lost touch with their traditions, Hamacher says.

The findings challenge the view that oral traditions only last a few generations. “A lot has been lost but you’d be surprised how many people retain this knowledge; far from being dead, Indigenous knowledge is alive and thriving,” he says.