Opinion Firestorms: the bushfire/thunderstorm hybrids we urgently need to understand

When a bushfire rages so high it creates its own thunderstorm, it becomes a 'firestorm' and makes life much more difficult for firefighters. We still have a lot to learn about what triggers them, writes Jason Sharples. 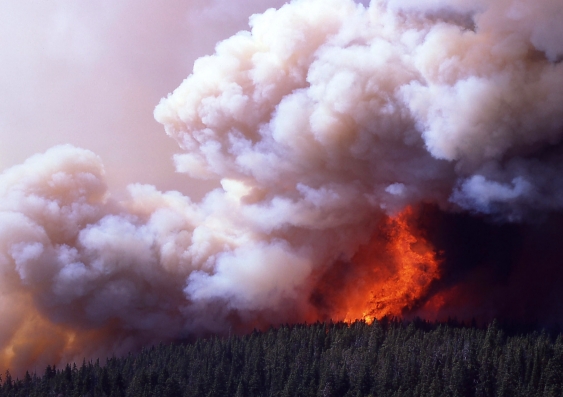 The higher the plume, the bigger the problem. Photo: Jim Peaco/Wikimedia Commons

OPINION: Fire has been a driving force across Australia for millennia. Indeed, the health of many of our ecosystems is intrinsically dependent on fire. But bushfires are also one of our most frequent natural hazards, with a total cost estimated at A$8.5 billion per year.

In the past decade or so, extreme bushfires in southeastern Australia have burned more than a million hectares, claiming more than 200 lives and over 4,000 homes. Similar losses in other major urban areas have prompted questions about whether we are seeing a shift towards a significantly more hazardous fire regime, characterised by increasing fire frequency and intensity, and the development of catastrophic “firestorms”.

While these extreme bushfires account for only a very small percentage of fire events, they are responsible for the lion’s share of bushfire-related losses.

In contrast to typical bushfires, which spread across the landscape as well-defined burning fronts with smoke plumes perhaps a few kilometres high, extreme bushfires exhibit deep and widespread flaming and produce smoke plumes that can extend 10-15km into the atmosphere.

At these altitudes, bushfire plumes can actually develop into thunderstorms (hence the term “firestorm”). As such, extreme bushfires become much more difficult for emergency services to handle, making them all but impossible to suppress and their spread difficult to predict.

Beyond hot, dry and windy

Like other dangerous bushfires, firestorms are driven by hot, dry and windy weather. But to spawn a firestorm, a range of other conditions must also be met; these can include a rugged landscape, particularly nasty weather events that produce “spikes” in fire danger, and conditions in the upper atmosphere that allow fire plumes to grow to considerable heights.

While previous studies have considered past and projected changes in the hot, dry and windy aspect of fire danger, less research has been done on the future projections for these other types of conditions. This means that we have quite a poor understanding of how extreme bushfires might affect us in the future.

As part of a series of reviews produced by the Australian Energy and Water Exchange initiative, my colleagues and I have taken a closer look at the most catastrophic bushfire cases and the factors that drive them, beyond the usual hot, dry and gusty weather.

There has been an overall increase in the frequency of major bushfire events in southeastern Australia since the mid-19th century. In particular, in the past 15 years a major fire event has occurred every 5 years or less. While some of this increase is due to changes in land use since European colonisation, there is also strong evidence of climate-driven changes.

We found that besides increases in dangerous surface fire danger conditions, upper atmospheric conditions have also become more conducive to explosive fire growth. High levels of the c-Haines index, which signals greater potential for a fire’s plume to rise high into the atmosphere, have become considerably more prevalent since the 1980s. The effects of droughts and widespread heatwaves have also contributed to the occurrence of extreme bushfires.

Looking into the future, high c-Haines values are projected to grow more prevalent still, albeit more gradually than over recent decades. Frontal weather patterns associated with particularly bad fire days are also projected to become more frequent during this century, and rainfall is projected to decrease over southwest and southeastern Australia.

All of this suggests that extreme bushfires will become a more common occurrence into the future.

What we still don’t know

Our methods for assessing fire danger do not explicitly account for the effects of extended drought and heatwaves on larger fuel elements such as branches and logs, and so may not properly account for their effects on fire spread and heat release into the atmosphere.

There is also considerable uncertainty about how fuel loads will change into the future. It is possible that the higher fire intensities expected to result from the direct effects of a warmer, drier climate may be offset by lower fuel loads.

Our understanding of extreme fire occurrence is also hampered by the lack of long-term and prehistoric climate data, which makes it hard to work out what the “normal” level of extreme bushfires has been in the past. While charcoal records show promise in this regard, we still don’t know enough about how charcoal is generated, deposited and subsequently preserved during extreme fires.

To predict the future occurrence of extreme bushfires, we also have more work to do in understanding how the trends forecast by global climate models will play out in terms of creating regional-scale fire weather conditions. And we still need to figure out the likely effects of other large-scale patterns such as El Niño.

Given the relatively recent advances that have been made in understanding the key drivers of extreme bushfires, the field is now ready for targeted studies that will help us estimate the future risk of extreme bushfires – and how best we can confront the threat.