In the PNG highlands, lives have been changed and clan wars averted through the introduction of an unlikely peacemaker – fish. 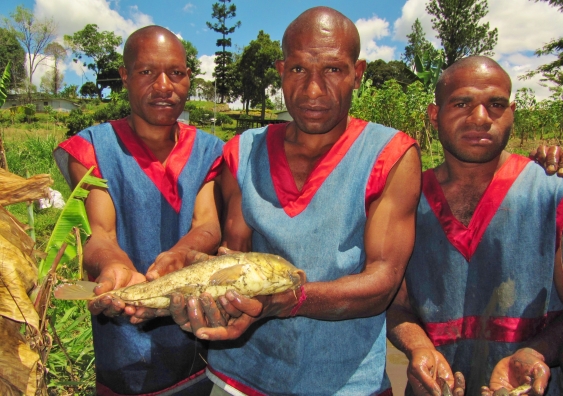 Inmates in the Fish for Prison program show off their catch of the day. Photo: Jes Sammut

In the linguistically diverse highlands of Papua New Guinea, many people still belong to customary clans and bloodshed between them is commonplace.

“We know of at least three tribal wars that have come to an end as a result of our project interventions. Men who were in the past trying to kill each other are now working together.”

“Someone’s pig gets into someone else’s garden and eats everything, then people want compensation and a fight starts. Someone gets killed and it sparks a vicious cycle of payback.”

Since 2010, Sammut has been leading a project in PNG, along with Jacob Wani from the National Fisheries Authority (NFA) of PNG, which is training people in remote villages – including clans that have been at war for decades – how to farm fish for income and food security.

The project team is turning adversaries into unexpected business partners.

“We know of at least three tribal wars that have come to an end as a result of our project interventions,” Sammut says. “Men who were in the past trying to kill each other are now working together in fish farming co-operatives, sharing shovels, water pumps, equipment … and knowledge.”

Women are also thanking them for saving their sons, husbands and fathers from the violence, he says, and the money they’re making from fish sales is enabling them to send their children to school. 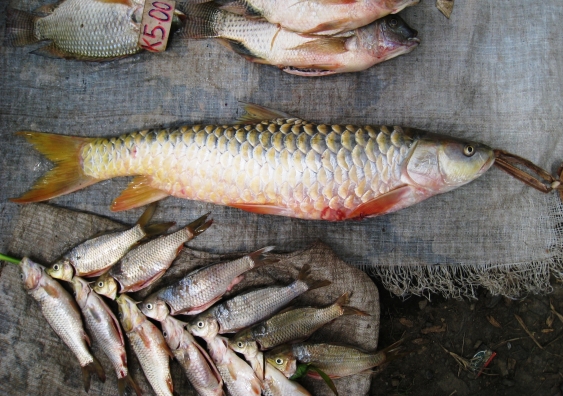 Locally farmed fish can be caught and cooked when needed without refrigeration. Photo: Jes Sammut

The project, which is funded by the Australian Centre for International Agricultural Research (ACIAR) and NFA, has been designed to provide an affordable source of protein for locals.

Around 80% of PNG’s population is unemployed and live off less than $2 per day. Rural villagers farm vegetables, but protein deficiency is a big problem – it prevents people with HIV/AIDS from responding to medical treatment, and leads to malnourishment and stunted growth in children.

Havini Vira, who recently took leave from the NFA to complete a Masters at UNSW, says 55% of child deaths in PNG hospitals are from malnutrition. While pigs are present, Vira says they cost up to
$5,000 each, and are only killed at big ceremonies. This is because of a lack of refrigeration, which means the meat can’t be stored. “You have to eat it in one shot,” says Vira. “It’s just too expensive.”

Farming chickens commercially is also out of reach, says Sammut, as it requires a lot of money for feed and ongoing disease control programs.

Fish, by comparison, provide protein at an affordable cost and can be caught and cooked when needed, without refrigeration.

When Sammut and Wani started their program of research, there were 10,000 fish farms, but the fish weren’t growing to table size due to a lack of feed, and inbreeding.

Sammut and another UNSW Masters student from PNG, Justin Narimbi, have been researching how to make fish feed – which accounts for up to 80% of costs – more affordable, by supplementing it with food sources in the ponds, such as plankton, algae and insects. The project is also developing family lines of one fish species, tilapia, that can grow well across many generations.

Meanwhile, on the ground, the project team members are teaching farmers how to dig and stock their ponds, and also training local technicians, scientists and community engagement officers, some of whom are taking fish farming into literally unexplored valleys. 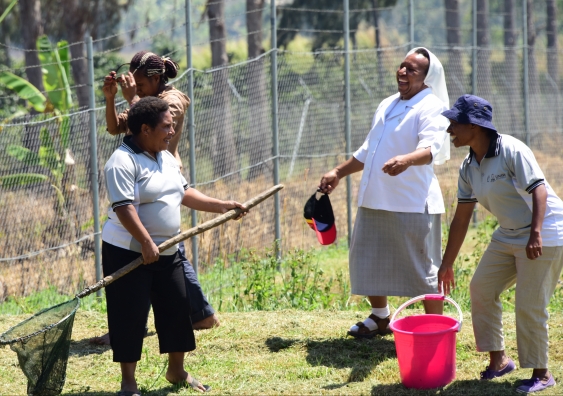 The Sisters of Notre Dame help teach vulnerable clients to farm fish and regain their status in the community. Photo: Jes Sammut

Today there are more than 60,000 fish farms in PNG, and they’re growing in popularity. Even the church is on board. Sammut, Wani and their team have been working with the Sisters of Notre Dame, who run the Maria Kwin Training Centre – a place where drug addicts and vulnerable members of society can go for help.

The nuns, and the wider project team, have been training their clients to farm fish so they can create their own businesses, kick their drug habits and “regain status in their communities”.

Through the NFA and the ACIAR project, they also run a Fish for Prisons program, teaching inmates how to farm fish.

“We’ve seen released prisoners go from being outcasts to community leaders … and none of them have committed crimes again,” Sammut says. “It’s given them a better option in life.”

Sammut’s research career began in the early 1990s when he was doing a PhD on fish diseases. Part of that work led him to India, where he discovered shrimp farms were failing, not due to recurring diseases, as locals suspected, but because of high acidity in the soil.

We’ve seen released prisoners go from being outcasts to community leaders … and none of them have committed crimes again.

He was drawn into the world of aquaculture, and ever since, he’s worked across South-East Asia and the Pacific. In 2005, following the devastating Indian Ocean tsunami, Sammut set up several ACIAR-funded projects in Aceh, in western Indonesia, rebuilding technical capacity in aquaculture.

“A lot of people in the fisheries industry lived very close to the coast, and were killed by the tsunami and the facilities were destroyed – including 25,000 hectares of aquaculture farms,” he says. This work has been ongoing for more than a decade.

While his work across the region has a development focus, Sammut says the work in PNG is particularly important because “even a little change can make an enormous difference”. 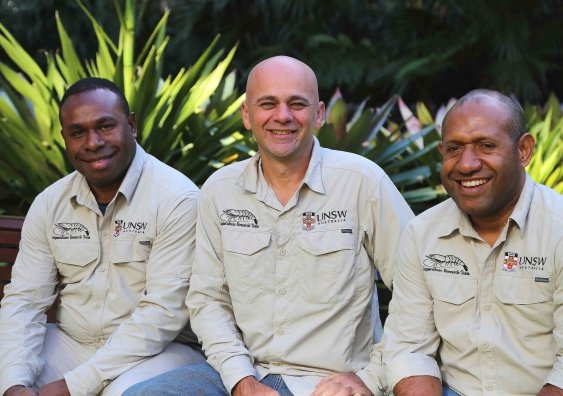 Vira remembers one trip he took to a remote western province. When he arrived with fish, the women started crying.

“I didn’t know why,” he says. “They were speaking in a language I didn’t understand.”

After asking someone to translate, he discovered they were tears of joy. The people had been eating tadpoles and frogs, and only now – with the introduction of fish farming – did they have an alternative.

“Some of these things really start your heart when you see what’s happening – seeing the impact fuels the desire to keep going.”