Community scientists have been photographing animals and plants in the months after the Black Summer fires. Each observation is a story of survival against the odds, or of tragedy. 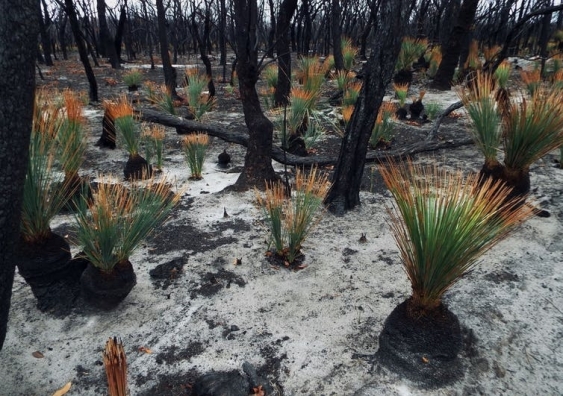 Around one year ago, Australia’s Black Summer bushfire season ended, leaving more than 8 million hectares across south-east Australia a mix of charcoal, ash and smoke. An estimated three billion animals were killed or displaced, not including invertebrates.

The impact of the fires on biodiversity was too vast for professional scientists alone to collect data. So in the face of this massive challenge, we set up a community (citizen) science project through the iNaturalist website to help paint a more complete picture of which species are bouncing back — and which are not.

Almost 400 community scientists living near or travelling across the firegrounds have recorded their observations of flora and fauna in the aftermath, from finding fresh wombat droppings in blackened forests, to hearing the croaks of healthy tree frogs in a dam choked with debris and ash.

Each observation is a story of survival against the odds, or of tragedy. Here are five we consider particularly remarkable.

The Gospers Mountain fire in New South Wales was the biggest forest fire in Australian history, razing an area seven times the size of Singapore. This meant there was nothing in history scientists could draw from to predict the animals’ response.

So it came as a huge surprise when a community scientist observed greater gliders deep within the heart of the Gospers Mountain firegrounds in Wollemi National Park, far from unburned habitat. Greater gliders are listed as “vulnerable” under national environment law. They’re nocturnal and live in hollow-bearing trees. 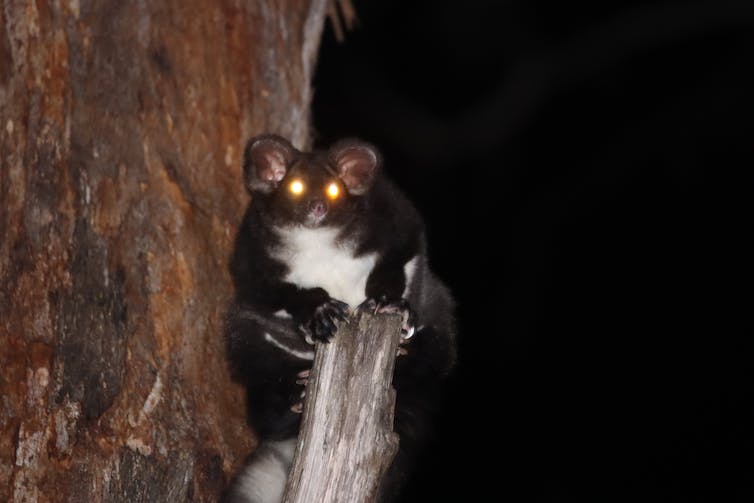 A citizen scientist snapped this photo of a greater glider in the heart of the the Gospers Mountain firegrounds. Mike Letnic/iNaturalist, CC BY-NC

How gliders survived the fire is still unknown. Could they have hidden in deep hollows of trees where the temperature is relatively cooler while the fire front passed? And what would they have eaten afterwards? Greater gliders usually feed on young leaves and flowers, but these foods are very rare in the post-fire environment.

Finding these gliders shows how there’s still so much to learn about the resilience of species in the face of even the most devastating fires, especially as bushfires are forecast to become more frequent.

The giant scale of the 2019-20 fires means post-fire flowering is on display in grand and gorgeous fashion. This is a feature of many native plant species which need fire to stimulate growth. 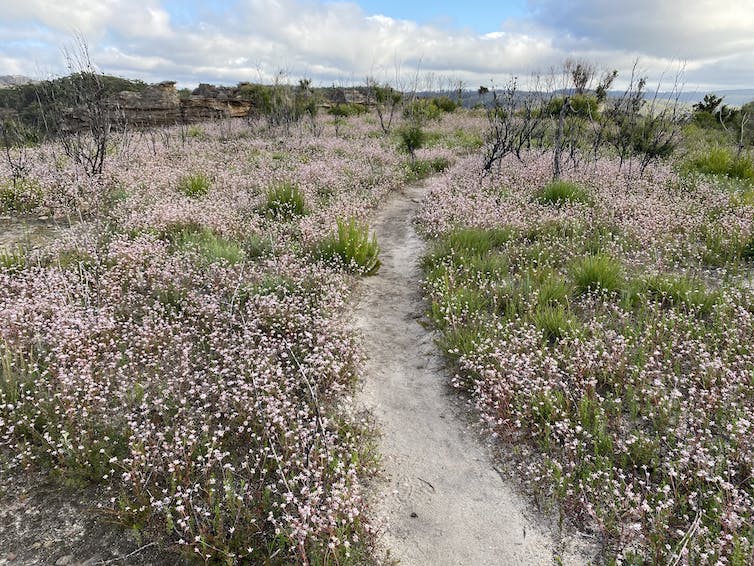 Pink flannel flowers are not considered threatened, but they are very rarely seen.

Individuals of this species spend most of their life as a seed in the soil. Seeds require a chemical found in bushfire smoke, and the right seasonal temperatures, to germinate.

Much of Australia’s amazing biodiversity is extremely local. Some species, particularly plants, exist only in a single valley or ridge. The Black Summer fires destroyed the entire range of 100 Australian plant species, incinerating the above-ground parts of every individual. How well a species regenerates after fire determines whether it recovers, or is rendered extinct. 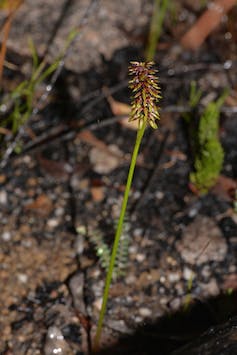 One of these is a species of midge orchid, which grows in a small area of Gibraltar Range National Park, NSW.

All of the midge orchid’s known sites are thought to have burned in late 2019. The species' fate was unknown until two separate community scientists photographed it at five sites in January 2021, showing its recovery.

Like many of Australia’s terrestrial orchids, this species has an underground tuber (storage organ) which may have helped part of it avoid the flames’ lethal heat.

Despite their incredible diversity and tremendous value to society, insects tend to be the forgotten victims of bushfires and other environmental disasters.

Many trillions of invertebrates would have been killed in the fires of last summer. A common sight during and after the bushfire season was a deposit of dead insects washed ashore. Some died from the flames and heat, while others died having drowned trying to escape. 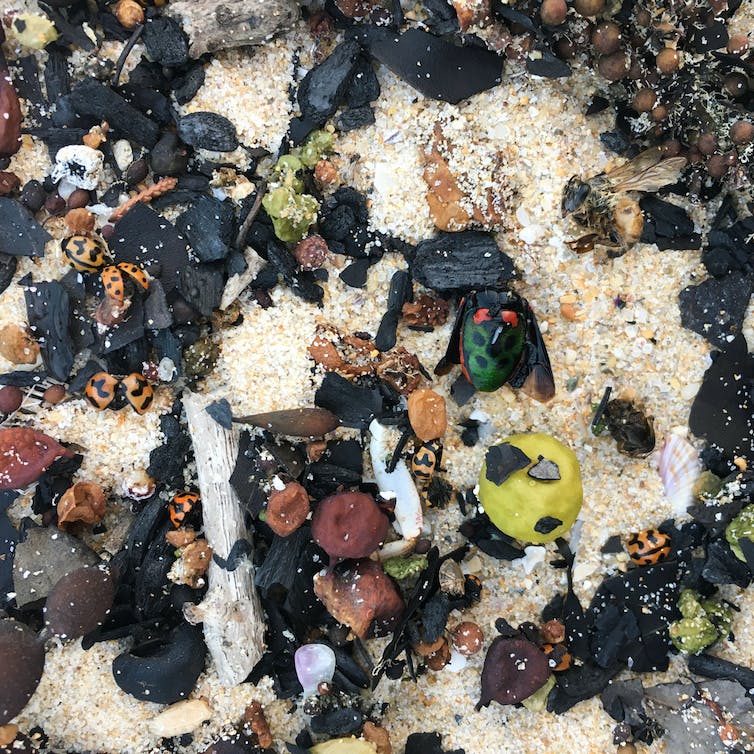 Dead insects washed up on the beach was a common sight in the fire aftermath. BlueBowerStudio/iNaturalist, CC BY-NC

One dead insect deposit — one of hundreds that washed up near Bermagui, NSW on Christmas Eve — included a range of species that have critical interactions with other organisms.

This includes orchid dupe wasps (Lissopimpla excelsa), the only known pollinator of the orchid genus Cryptostylis. Transverse ladybirds (Coccinella transversalis), an important predator of agricultural pests such as aphids, also washed up. As did metallic shield bugs (Scutiphora pedicellata), spectacular iridescent jewel bugs that come in green and blue hues. 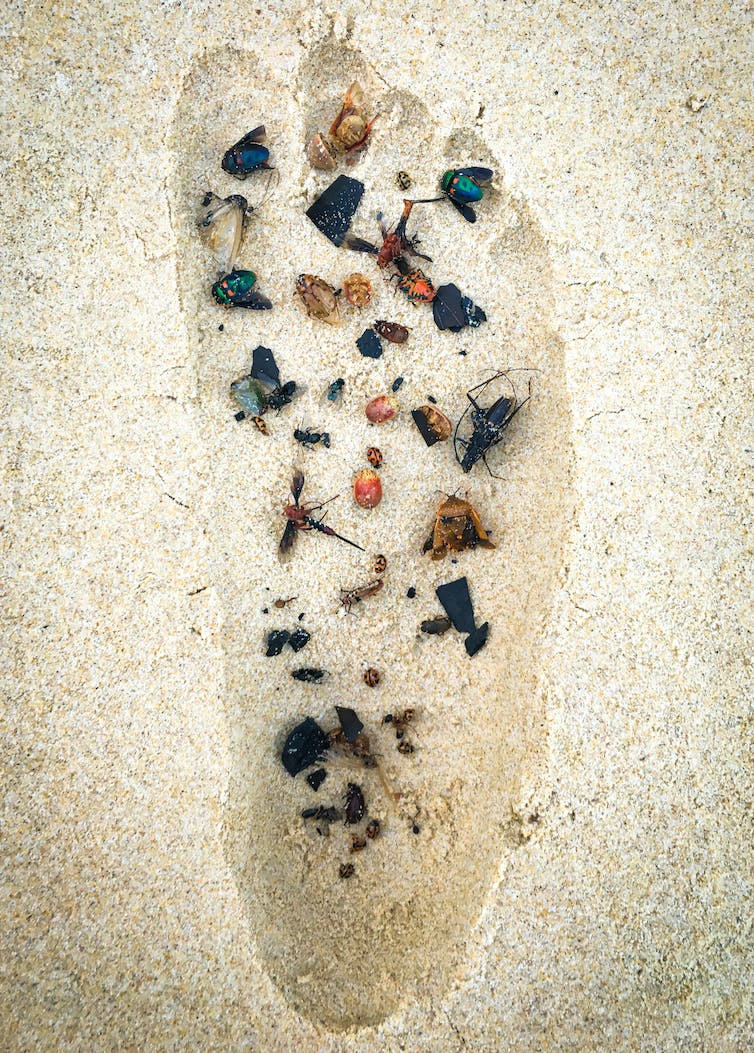 Some insects died from the flames and heat, while others died having drowned trying to escape the flames. BlueBowerStudio/iNaturalist, CC BY-NC

The unlikely survival of the Kaputar slug

Creatures such as kangaroos or birds have a chance to flee bushfires, but smaller, less mobile species such as native slugs and snails have a much tougher time of surviving.

The 2019-2020 bushfire season significantly threatened the brilliantly coloured Mount Kaputar pink slug, found only on the slopes of Mount Kaputar, NSW. When fires ripped through the national park in October and November 2019, conservationists feared the slug may have been entirely wiped out.

Read more: Photos from the field: zooming in on Australia's hidden world of exquisite mites, snails and beetles

But park ranger surveys in January 2020 found at least 60 individuals managed to survive, likely by sheltering in damp rock crevices. Community scientists have spotted more individuals since then, such as the one pictured here found in September 2020.

But the slug isn’t out of the woods yet, and more monitoring is required to ensure the population is not declining. 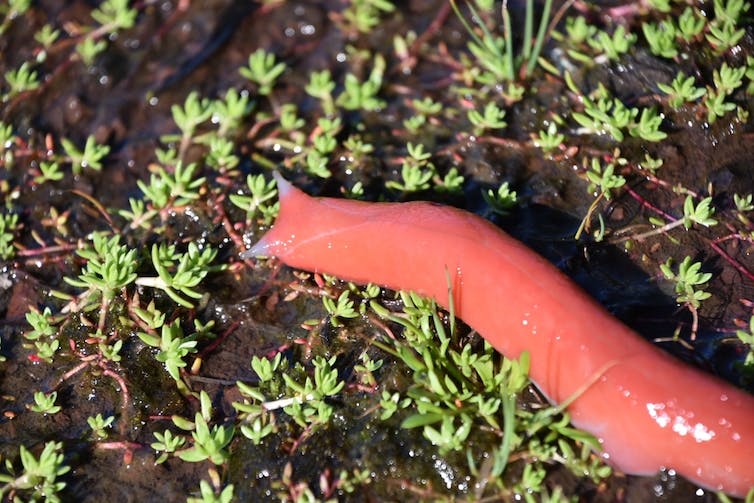 While community scientists have been documenting amazing stories of recovery all across Australia, there are still many species which haven’t been observed since the fires. Many more have been observed only at a single site.

The Snowy River westringia (Westringia cremnophila), for instance, is a rare flowering shrub found on cliffs in Snowy River National Park, Victoria. No one has reported observing it since the fire.

So far these community scientist observations have contributed to one scientific paper, and three more documenting the ability for species to recover post-fire are in process.

Recovery from Black Summer is likely to take decades, and preparing a body of scientific data on post-fire recovery is vital to inform conservation efforts after this and future fires. We need more observations to continue this important work.

Read more: Summer bushfires: how are the plant and animal survivors 6 months on? We mapped their recovery