Labor's policies have to get a lot more ambitious if they want to see real reductions in emissions. 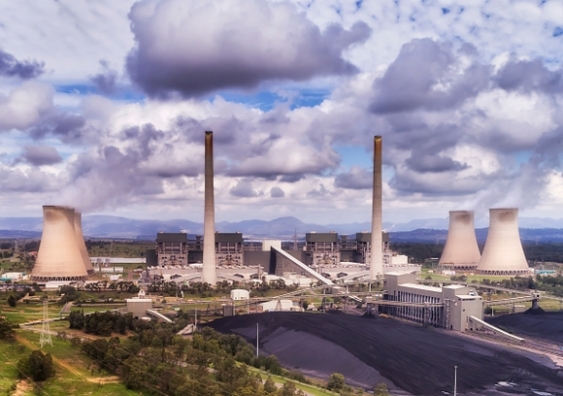 As the federal election approaches, Labor has two principal climate and energy targets: a 45% reduction in greenhouse gas emissions from the 2005 level by 2030, and for half of Australia’s electricity to come from renewable sources by 2030 (up from its current share of 19%).

The renewable electricity target is easily achievable with inexpensive extensions to Labor’s existing policies, but that policy would still leave Labor far short of its emissions target.

Because electricity contributes only 34% of Australia’s total emissions, more substantial policies are needed to reduce emissions from both electricity and the rest of the energy sector to achieve Labor’s greenhouse target.

How much greenhouse gas are we talking about?

In 2015 the government chose 2005 as the baseline for its Paris target, presumably because it was one of our highest-emission years since 1990 (2015 emissions were much lower).

In the year ending September 2005, Australia’s emissions were equivalent to 605 million tonnes (MT) of carbon dioxide. From 2007, emissions dropped sharply due to a reduction in land clearing and then again between mid-2012 and mid-2014 due to Labor’s carbon price.

In the year ending September 2018, the latest year for which we have firm numbers, Australia’s emissions total was 536MT of CO₂ equivalent. Since 2015 our annual total has risen slightly, due to increases in non-electricity emissions outweighing reductions in electricity emissions. 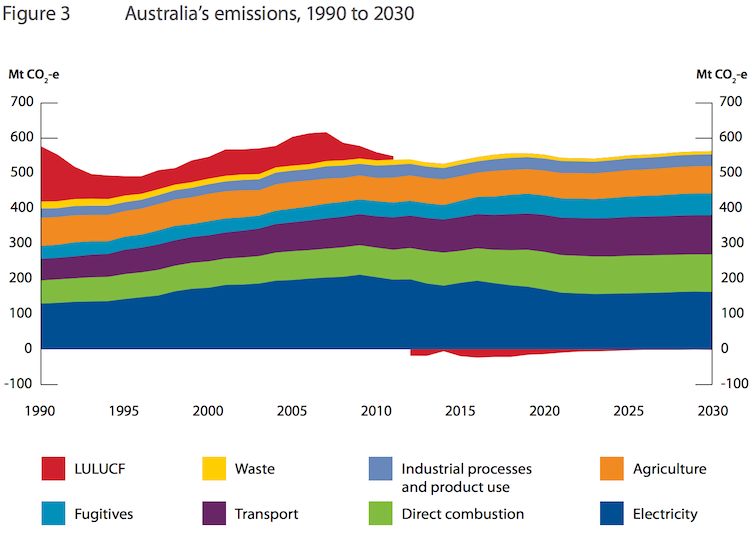 Australia’s historical and projected emissions, calculated in 2018. Note: LULUCF stands for ‘land use, land use change and forestry’. Australia’s emissions projections 2018, Department of the Environment and Energy

How much emissions does 50% renewable electricity cut?

As shown in the pie chart below, electricity currently contributes 34% of Australia’s annual emissions, or 182MT.

Then, taking into account that renewable energy is already 19% of total electricity generation, Labor’s 50% target would cut electricity emissions by 56MT. 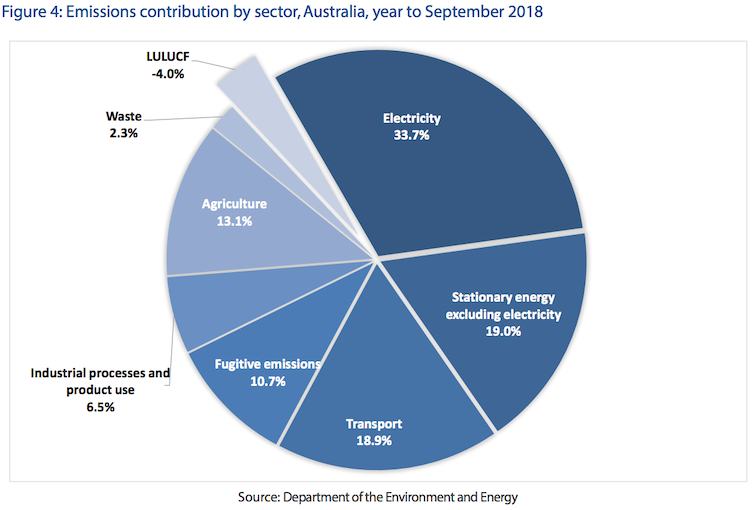 Successfully cutting 56MT from the annual emissions total 203MT gives us a gap of 147MT.

Let’s look at some feasible options for Labor to reduce this emissions gap. These are not all independent and so cannot simply be tallied up, but they do nevertheless offer some concrete targets.

The two most substantial options are increasing the renewable electricity target to 100%, and improving overall energy efficiency by 20%.

Further goals could include electrifying one-quarter of vehicles by 2030 and charging them only with renewable energy; electrifying half of non-electrical heat; halving non-energy industrial emissions; and halving fugitive emissions.

So how attainable are these objectives?

Electricity is the easiest and cheapest energy supply option to transition to renewables. A 100% renewable energy target, together with no increase in non-electricity emissions (and without electrification of transport and heating), would cut 2018 annual emissions by 182MT, from 536MT to 354MT, and reduce the gap to 21MT.

Labor’s policy specifies A$10 billion for the Clean Energy Finance Corporation, A$5 billion for upgrading the electricity grid, and A$200 million for household batteries – all big steps forward – but doesn’t mention reverse auctions which can have zero net cost to government.

To achieve this, we would need to see a suite of policies along the following lines, none of which have been mentioned explicitly by Labor:

Electrifying one-quarter of land transport and charging vehicles with renewable electricity is more substantial than Labor’s current transport target, namely that half of new vehicles should be electric by 2030.

Under Labor’s policy, the vast majority of vehicles would still have internal combustion engines and most of the remainder would be charged from a grid that’s 50% fossil-fuelled. A realistic emissions reduction from Labor’s modest transport target would be about 8MT.

However, if battery costs fall substantially over the next decade, the market could make the majority of new vehicles electric by 2030.

With a transition to nearly 100% renewable electricity by 2030, electric cars would be charged either from a “green” grid or rooftop solar. If a quarter of all cars are electric, this could contribute up to 17MT of emissions cuts.

Electrifying half of non-electrical heat, which currently comprises 19% of annual emissions, would contribute about 40MT of emissions reductions, assuming 100% renewable electricity; this would be challenging but possibly achievable with policies to shift gas heating to electrical.

Halving non-energy industrial emissions, which currently comprise 6.5% of our annual emissions, would save around 17MT. This goal needs regulation to implement research and development; one good starting point is to phase out traditional Portland cement and replace it with geopolymer cement.

According to the Intergovernmental Panel on Climate Change, to keep global warming below 2℃ the world has a total CO₂ budget of 1,000 billion tonnes, or gigatonnes (GT), measured from 2011. To keep the world below 1.5℃, that budget shrinks to 400GT.

Australia contributes 1.5% of global emissions, and annually our emissions have been hovering around 0.55GT. That gives us 23 years of emissions at the current level to hit the 2℃ target. If we aim for the more ambitious 1.5℃ – which most experts agree is necessary to avoid climate disaster – that shrinks to just 5 more years at our current emission levels.

Australia is the world’s biggest exporter of both coal and liquefied natural gas. From a global perspective, we need an urgent strategy to phase out these exports (and thus increase their international prices) and replace them with exports of hydrogen or ammonia produced from renewable energy.