Partially protected aquatic reserves are failing to protect fish, a survey of marine life on Sydney’s rocky reefs has revealed. 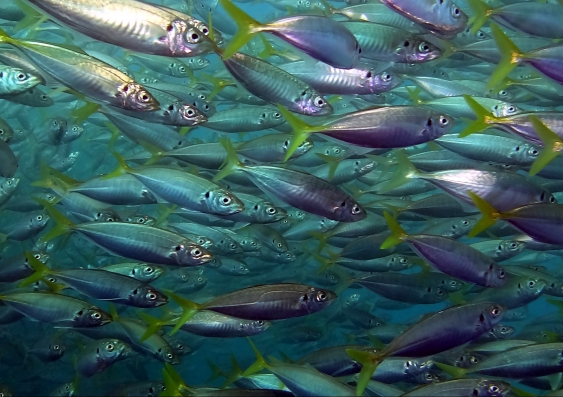 A school of yellowtail scad fish near Manly

Partially protected aquatic reserves are failing to protect fish, a survey of marine life on Sydney’s rocky reefs has revealed.

Divers found that aquatic reserves with only partial protection were no better than unprotected areas in terms of both the number of different fish species present and the number of fish 25 centimetres in length or longer.

On the other hand, fully protected no-take zones such as the reserve at Cabbage Tree Bay in Manly had a much greater abundance and diversity of large fish.

The survey was carried out in March this year by 12 volunteers including several marine scientists, and was sponsored by Sydney Institute of Marine Science (SIMS) and managed by the Underwater Research Group of NSW.

“The survey confirmed that the Sydney region has incredibly high fish biodiversity. Almost 600 species of fish have been recorded from Sydney Harbour alone, which is more than for the whole UK coastline," said Professor Johnston

Two separate analyses of the survey results by SIMS and by the Coastal and Marine Ecosystems Group at the University of Sydney (CMEG) found interesting trends in the data.

CMEG looked at the difference in overall fish diversity and abundance of targeted fish across fully protected, partially protected and unprotected areas in the nearshore waters of the Hawkesbury shelf bioregion.

“It’s not only large fish that are affected by fishing. Fully protected reserves had 50 per cent more species than partially or unprotected sites,” said Dr Renata Ferrari of the University of Sydney.

“The difference was striking when we looked at the abundance of fish targeted by fishers. We found twice as many inside fully protected areas as compared to both partially and unprotected sites, especially for species like yellow-tail scad, luderick and red morwong.

“Interestingly, the number and size of blue gropers, a species partially protected regardless of where it is found, was not different across levels of protection, suggesting that directly protecting a species can also be effective,” she said.

Professor Johnston, of the UNSW School of Biological, Earth and Environmental Science, said: “The only reserve near Sydney that has full protection from all forms of fishing had seven times the abundance of large fish and three times the number of large fish species compared to unprotected or partially protected areas.

“Large fish are great to look at but they are also important for ecosystem health. With so few fully-protected areas it is difficult to draw strong conclusions for the Sydney region, but global assessments have found that no-take sanctuary zones are an effective method of increasing the abundance of large fish.

“This new data suggests that to increase fish species richness and size, more fully-protected aquatic reserves should be trialled in the area," she said.

See an ABC TV report on the research here.

Study to plot impact of recreational boating in Sydney Harbour