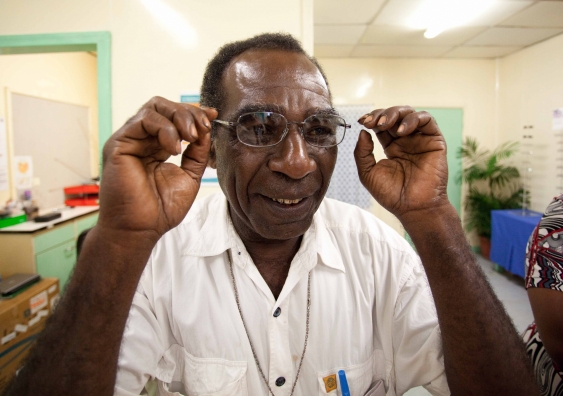 With a passion for improving the eye care of marginalised people in Australia and overseas, Dr Anthea Burnett says her work gives her enormous satisfaction. This is hardly surprising. What could be better than restoring the gift of sight?

Dr Burnett is the Global Research Manager for the Brien Holden Vision Institute (BHVI), an independent research and public health NGO, and a Visiting Scholar with UNSW Optometry and Vision Science. High impact research, during and beyond her UNSW PhD, has seen Dr Burnett involved in projects to develop and provide training, planning and toolkits for eye care workers and service providers in remote and rural Aboriginal and Torres Strait Islander communities in Australia.

The research, which attracted funding of almost $1 million between 2010 and 2015, was undertaken to address the shocking disparity in vision impairment and avoidable blindness cases among Aboriginal and Torres Strait Islander people, and resulted in a proven vision care model that could be rolled out to communities nationwide.

During this time, Dr Burnett has also been involved in designing and implementing research programs to investigate and improve the eye care of people in Papua New Guinea (PNG). She says this work commenced just over 10 years ago when she started working with the then Deputy Chief Ophthalmologist in PNG, Dr Jambi Garap. Dr Garap was concerned about the high prevalence of eye problems and lack of access to basic eye care, and interested in developing the country’s capacity to provide optometric services. As a result, BHVI, with the help of local collaborators, established PNG Eye Care as a local NGO in 2008.

“PNG is a country that desperately needs this kind of research and eye care intervention. So far, my work has primarily involved finding out how widespread a problem vision impairment is, and investigating the quality of life of people with vision problems and their access, if any, to eye care services,” Dr Burnett says.

To advocate for additional optometric services, Dr Burnett says, the essential first step was to gather evidence about how people were affected by vision impairment in villages in and around Port Moresby and up in the Highlands.

“It’s sometimes incorrectly presumed that people living in developing countries aren’t significantly impacted by near-vision impairment,” Dr Burnett says. “But our research found the opposite to be true.”

In visiting many people in their homes, the research team found many ways that vision impairment negatively impacted peoples’ lives, from large issues such as being unable to repair their homes or continue their fishing or sewing livelihoods, to smaller things like being unable to recognise faces or read.

“We also found some interesting cultural barriers around glasses use. Some people expressed a reluctance to wear glasses because they don’t want to seem like they are showing off in front of their neighbours, and some women reported their husbands don’t approve of them wearing glasses because it would make them look like they were trying to attract a new husband,” Dr Burnett says.

“These were unexpected but very important considerations. When developing new services to encourage glasses use, we need to make sure that people are actually going to wear them.” 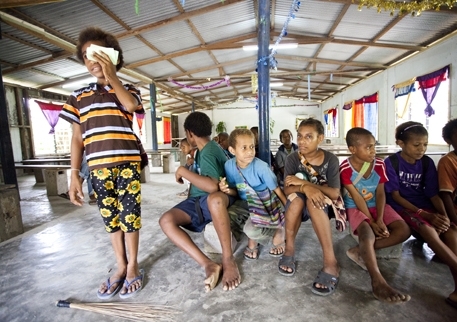 After that initial research, Dr Burnett worked closely with local ophthalmologists, PNG Eye Care and partners to secure funding from the Fred Hollows Foundation to do a national survey, which was a huge undertaking.

They visited 100 communities across the country, by boat, by road, by airplane and by trekking up mountains, to interview and examine 5000 adults over the age of 50, to find out exactly how much blindness and vision impairment there was in PNG.

The results were shocking. The estimated national prevalence of blindness was 5.6%, which was high, but for women in Highland regions, the rates of blindness were the highest in the world at 11%.

“We also found a reasonably high level of diabetes, and in this population, 80% of them never had an eye exam for diabetic retinopathy before. We also discovered that most people don’t know that cataract surgery is possible,” Dr Burnett says.

“Our research has highlighted a serious issue in PNG, and I’m confident we will continue to build on the work we have been doing since 2008. The World Health Organisation, for example, is committed to developing a PNG action plan to reduce the backlog of cataract surgeries. I don’t think this would have happened so readily without our research.”

With only 10 ophthalmologists servicing a country of 7 million people there aren’t many services available, especially in remote areas, so Dr Burnett says they will continue to work with PNG Eye Care and local partners to advocate for more services and secure more funding.

“Working in the eye care field is so rewarding because often the solutions are simple and so cheap, but have a profound impact on people’s lives. With the right research, advocacy and funding you can solve a big problem practically overnight.”

Bushfire smoke is bad for your eyes, too. Here's how you can protect them