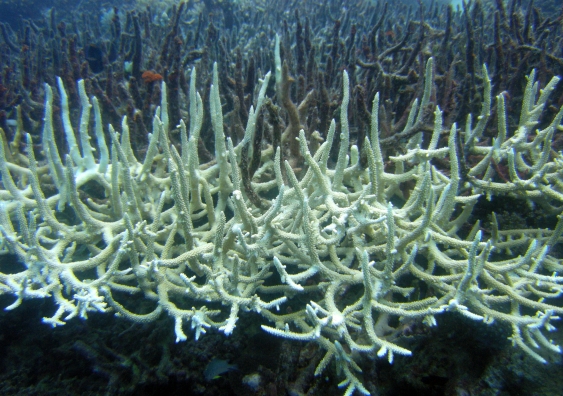 OPINION: The worst bleaching event on record has affected corals across the Great Barrier Reef in the last few months. As of the end of March, a whopping 93% of the reef has experienced bleaching. This event has led scientists and high-profile figures such as Sir David Attenborough to call for urgent action to protect the reef from annihilation.

There is indisputable evidence that climate change is harming the reef. Yet, so far, no one has assessed how much climate change might be contributing to bleaching events such as the one we have just witnessed.

We examined the Coral Sea region (shown above) to look at how climate change is altering sea surface temperatures in an area that is experiencing recurring coral bleaching. This area has recorded a big increase in temperatures over the past century, with March 2016 being the warmest on record.

March sea surface temperatures were the highest on record this year in the Coral Sea, beating the previous 2015 record. Source: Bureau of Meteorology.

To find out how climate change is changing the likelihood of coral bleaching, we can look at how warming has affected the likelihood of extremely hot March sea temperature records. To do so, we use climate model simulations with and without human influences included.

If we see more very hot March months in simulations with a human influence, then we can say that climate change is having an effect, and we can attribute that change to the human impact on the climate.

This method is similar to analyses we have done for land regions, such as our investigations of recent Australian weather extremes.

The decaying El Niño event may also have affected the likelihood of bleaching events. However, we found no substantial influence for the Coral Sea region as a whole. Sea surface temperatures in the Coral Sea can be warmer than normal for different reasons, including changes in ocean currents (often related to La Niña events) and increased sunshine duration (generally associated with El Niño conditions).

Overall, this means that the influence of El Niño on the Coral Sea as a whole is weak. There have been severe bleaching events in past El Niño, neutral and La Niña years.

We estimate that climate change has increased temperatures in the hottest March months by just over 1℃. As the effects of climate change worsen we would expect this warming effect to increase, as has been pointed out elsewhere.

Overall, we’re observing rapid warming in the Coral Sea region that can only be understood if we include human influences. The human effect on the region through climate change is clear and it is strengthening. Surface temperatures like those in March 2016 would be extremely unlikely to occur in a world without humans.

As the seas warm because of our effect on the climate, bleaching events in the Great Barrier Reef and other areas within the Coral Sea are likely to become more frequent and more devastating.

Action on climate change may reduce the likelihood of future bleaching events, although not for a few decades as we have already built in warming through our recent greenhouse gas emissions.

A note on peer review

We have analysed this coral bleaching event in near-real time, which means the results we present here have not been through peer review.

Recently, we have started undertaking these event attribution analyses immediately after the extreme event has occurred or even before it has finished. As we are using a method that has been previously peer-reviewed, we can have confidence in our results.

It is important, however, that these studies go through a peer-review process and these results will be submitted soon. In the meantime we have published a short methods document which provides more detail.

Our results are also consistent with previous studies (see also here and here).

David Karoly is Professor of Atmospheric Science, University of Melbourne.

Mitchell Black is a PhD Candidate, University of Melbourne.

Human progress is no excuse to destroy nature. A push to make 'ecocide' a global crime must recognise this fundamental truth