UNSW tsunami expert James Goff has co-edited the first textbook to be written on the fire, drought, flooding rains and other natural phenomena that plague the sunburnt country and its close neighbours. 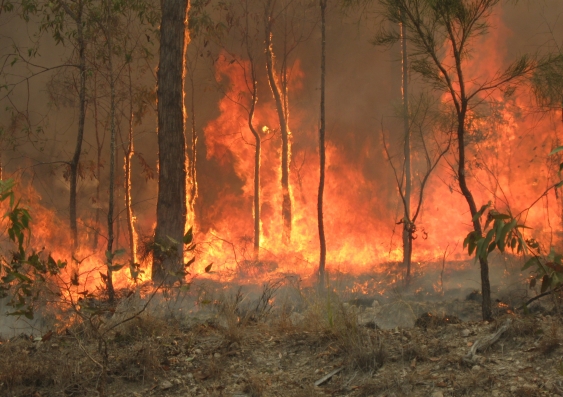 A bushfire in Queensland CC BY-SA 3.0

UNSW tsunami expert James Goff has co-edited the first textbook to be written on the fire, drought, flooding rains and other natural phenomena that plague the sunburnt country and its close neighbours.

The new book, Natural Hazards in Australasia, which also covers cyclones, earthquakes and volcanic eruptions, helps redress a major imbalance in the material available to students of physical geography.

“Many ideas and concepts about natural hazards have been developed in Australasia, and yet they are seldom seen in textbooks because these books have invariably been written from a Northern Hemisphere perspective,” says Professor Goff, of the School of Biological, Earth and Environmental Sciences.

Goff, who co-edited the new book with Associate Professor Chris de Freitas of the University of Auckland, has conducted his research in environments ranging from high mountains to deep oceans. He has studied tsunamis, earthquakes, cyclones and many other natural hazards in more than 25 countries including Antarctica, Indonesia, Papua New Guinea, Japan, Mexico, Hawaii and Canada.

In 1998, Goff surveyed the devastation wrought by the tsunami that wiped out entire villages in Papua New Guinea – probably the first tsunami of the modern era to attract global media attention. He also assessed the impact of the earthquake and ensuing tsunami that struck Samoa, American Samoa and the surrounding islands in 2009.

His research in Australia has shown that Australian coastline has been struck by up to 145 possible tsunamis since prehistoric times, with the largest recorded inundation caused by an earthquake off Java in Indonesia on 17 July 2006.

The resulting tsunami reached up to 7.9 metres above sea level on land at Steep Point in Western Australia.

Co-author of the book chapter on tsunamis, Dr Catherine Chagué-Goff of UNSW and the Australian Nuclear Science and Technology Organisation, has also carried out studies of soil chemistry in Japan, including following the 2011 tsunami that triggered the Fukushima nuclear reactor disaster.

Her research has revealed that past tsunamis travelled far further inland than had previously been estimated using the visible signs such as sand deposits.

“Discovering that past tsunamis were larger than we thought will allow better planning to help mitigate the impact of future disasters,” says Goff.

How well communities prepare themselves to cope with natural hazards and manage emergencies can determine the severity of the impacts, including any eventual loss of life and injury, effects on health, property damage, loss of services, environmental damage and economic disruption.

The textbook examines issues such as vulnerability of societies to hazards, ways to mitigate their impact and resilience – the capacity to recover from a disaster.

“Most natural hazards do not occur in isolation. In fact, the more research that is done, the more we realise how interconnected they are,” says Goff.

Natural Hazards in Australasia is published by Cambridge University Press.