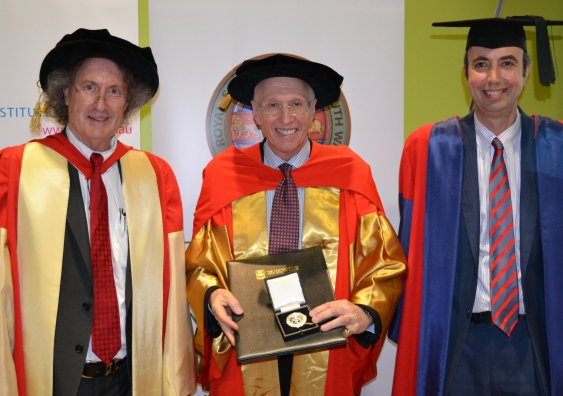 Professor Pepper holds the Pender Chair of Nanoelectronics at University College London and is a pioneer of the physics of advanced semiconductor structures. He has also been awarded the 2013 Dirac Medal for the Advancement of Theoretical Physics by UNSW.

The honorary degree was conferred by Deputy Vice-Chancellor (Research), Professor Les Field, in a ceremony following Professor Pepper’s delivery of the 2013 Dirac Lecture and the presentation of his medal.

“The work of Sir Michael Pepper has been an inspiration to many, not only in England but around the world, and particularly to us here at UNSW, where he has had a very close connection with the School of Physics for more than 20 years,” Professor Field said.

UNSW Dean of Science, Professor Merlin Crossley, read the conferral citation: “We honour Sir Michael Pepper FRS in recognition of his eminent service to UNSW and for the distinction he has received as one of the world’s most respected researchers and academics in the field of semiconductor nanostructures.

“Since 1990 Sir Michael has not only advised, supported and collaborated with this university, but also seeded the school with some of the best members of his own research group - a move that was to prove instrumental in the development of UNSW’s prominent position as a major international contributor to condensed matter physics, especially semiconductor nanostructures.”

The Dirac Medal is awarded by UNSW and the Australian Institute of Physics to commemorate the visit to UNSW in 1975 by the British Nobel Laureate, Professor Paul Dirac, one of the greatest theoretical physicists of the 20th century.

Professor Pepper carried out much of his research in the Cavendish Laboratory at Cambridge University, where he worked from 1973 to 2008.

He was founding managing director in 1991 of Toshiba Research Europe, Cambridge and co-founder in 2001 of Teraview, a company which uses semiconductor devices to generate terahertz radiation, which has applications in medicine, security and industrial process control.

He was elected a Fellow of the Royal Society in 1983 and was knighted in 2006. He has won many awards including the 2005 Royal Medal and the 2013 Faraday Medal.