Opinion Hitting the beach this summer? Here are some of our top animal picks to look out for

Australia’s coastline spans more than 33,000km – and there are myriad marvellous marine animals we share this space with. 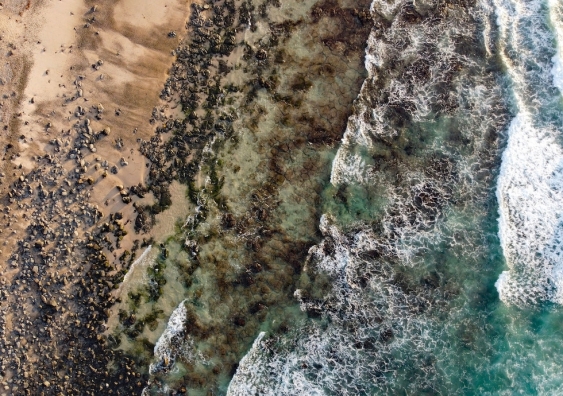 Australia has one of the longest coastlines in the world. And it’s packed with life of all shapes and sizes – from lively dolphins leaping offshore, to tiny crabs scurrying into their holes.

Here is just some of the diverse coastal life you might expect to see this summer, if you spend some time at the water’s edge.

We’re fortunate to have 15 species of dolphin (and one porpoise!) living in Australian waters. The large bottlenose dolphins (Tursiops spp.) are relatively common and can be spotted all the way around our coast.

You might see them playing in the waves, jumping out of the water, or even surfing among humans. 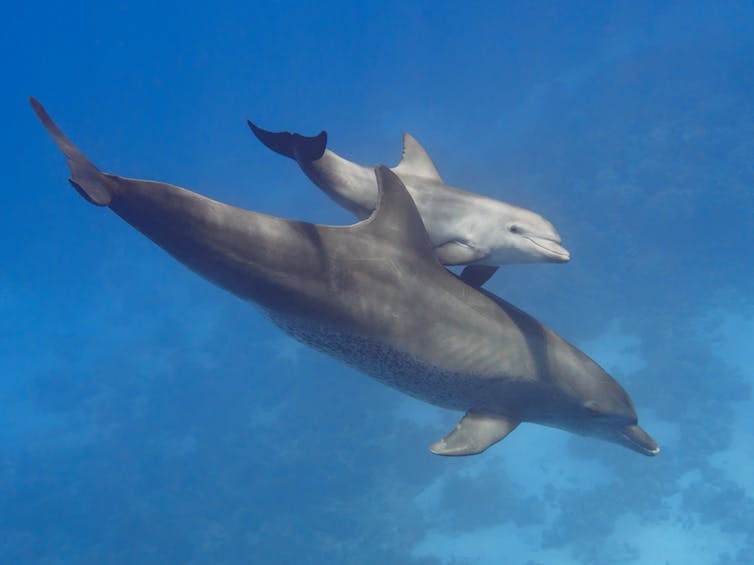 Bottlenose dolphins are generally grey with a lighter underside and have a pronounced, curved dorsal (upper) fin. Photo: Shutterstock

Turtles are less obvious, but can be spotted as they bob their heads out of the water to breathe. Australia’s coasts are home to six of the world’s seven sea turtles (all listed as either vulnerable or endangered).

The more common green turtle (Chelonia mydas) can be found everywhere except in the coldest southern waters. In summer, the turtles travel north to the tropical waters of QLD, NT and WA to reproduce – laying their eggs in the warm sand. 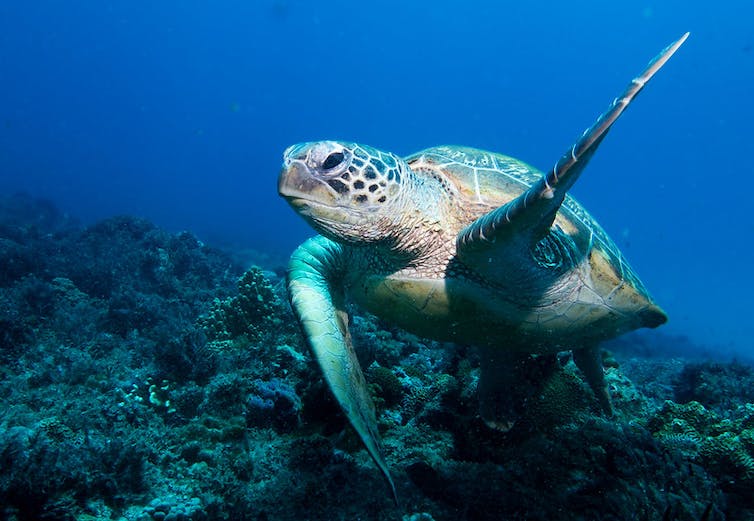 Another reptile you might encounter in the eastern coastal areas is the water dragon (Intellagama lesueurii). You’ll find them hovering around beach-side picnic areas, looking for tasty treats such as flies, ants, bugs, native fruits and flowers. As with all native animals, it’s important not to feed them. 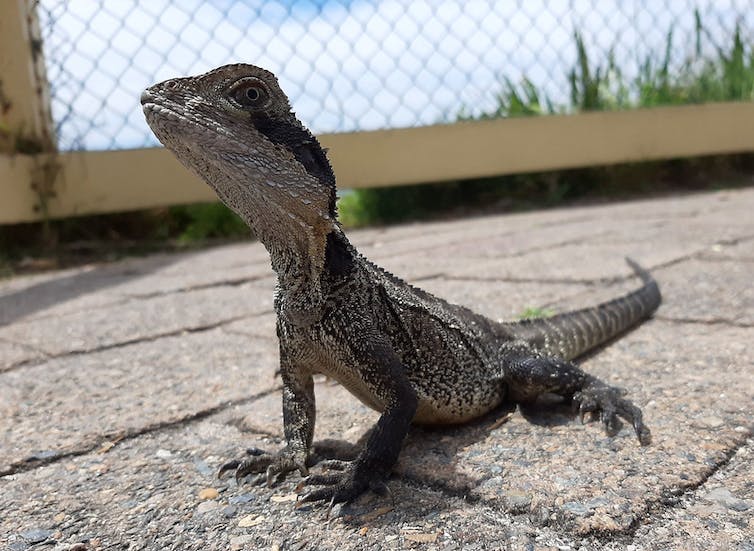 Heads in the clouds

If you cast your eyes up, you’ll see many coastal bird species soaring above.

Two of our favourites are the protected white-bellied sea eagle (Haliaeetus leucogaster) and the sooty oystercatcher (Haematopus fuliginosus). Both rely on marine animals for food, and nest in coastal areas right around Australia. 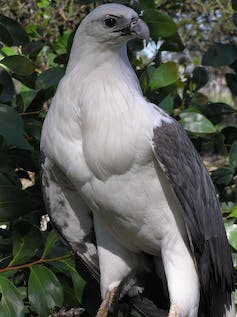 With a wingspan of up to 2m, you can find white-bellied sea eagles soaring above headlands. Photo: WikiCommons

The sea eagle mostly feeds on fish, turtles and sea snakes. It was recently listed as either threatened, endangered, or vulnerable in four states, largely as a result of coastal developments.

Meanwhile the sooty oystercatcher is, well, all black. It has distinctive bright-orange eyes and a long beak. Sooties can be found strutting among the seaweed and sea squirts on rocky shores.

As the name suggests, these birds enjoy eating molluscs and other invertebrates. 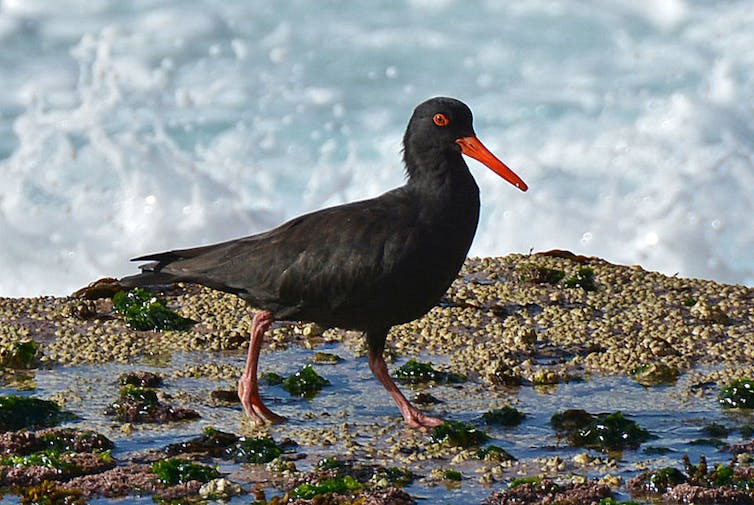 Many a critter will run for cover as sooties (and humans) approach, including the swift-footed crab (Leptograpsus variegatus). This crab’s mostly purple body is sprinkled with flecks of olive, and sometimes orange.

The species lives among the rocky shores around southern Australia, from WA to QLD, and even Tasmania. 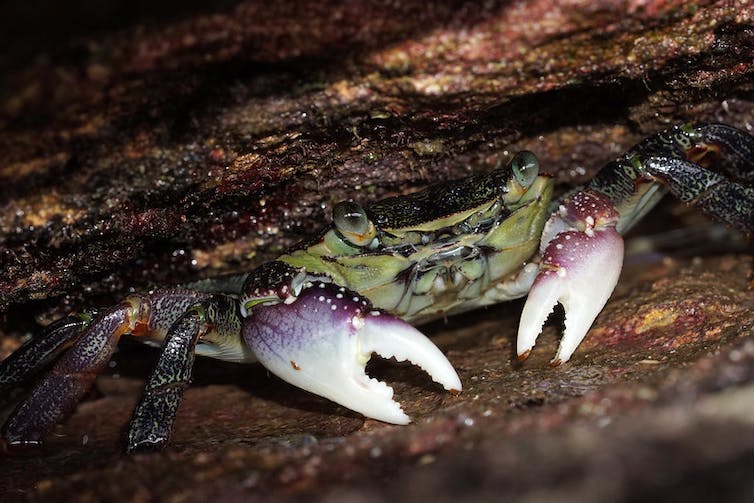 The swift-footed crab can grow to about 5cm in shell width. Photo: John Turnbull/Flickr, Author provided

You’re much less likely to see another common crab, the sand bubbler. But you might see the results of its industrious activity on flat, wet and sandy areas.

Sand bubblers live in underground burrows, emerging during the low tide to filter sand through their mouthparts looking for food.

In this process, they end up making little pea-sized sand balls. When the tide starts to rise again, they return to their burrows and wait in a bubble of air, which they use to breathe, until the tide recedes. 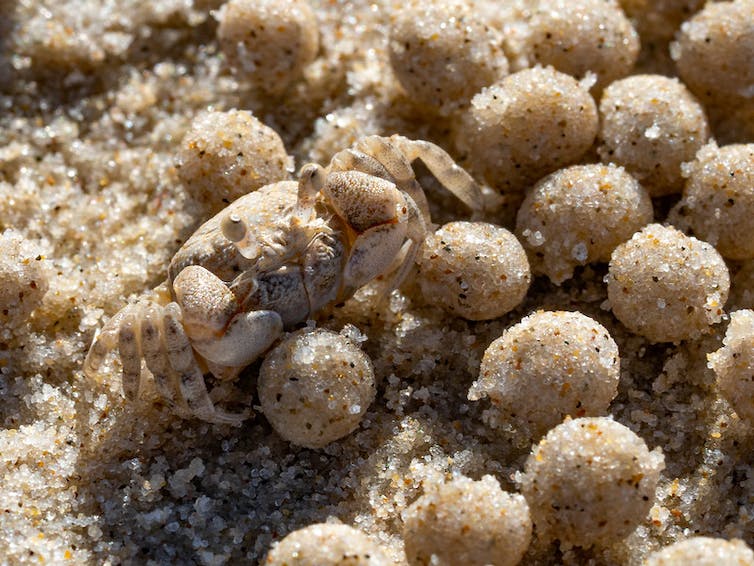 Sand bubblers, from the family Dotillidae, are tiny and will quickly hide if they sense danger. Photo: John Turnbull/Flickr, Author provided

Molluscs are another diverse group of marine animals on our shores, and one of the best known molluscs is the octopus. Along with squid and cuttlefish, this trio of cephalopods is considered to be among the most intelligent invertebrates on Earth. 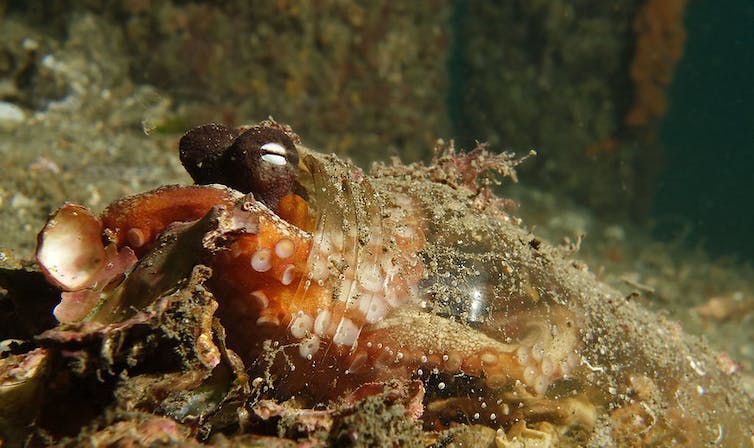 Near urban areas, octopuses have been known to make homes of bottles, jars and even discarded coffee cups. Photo: John Turnbull, Author provided

In the case of the octopus, this may be due to having nine “brains”, including a donut-shaped brain in the head and a mini brain in each tentacle, which allow the tentacles to operate somewhat independently.

Australia has several octopus species, from the gloomy octopus (Octopus tetricus) on the east coast, to the Maori octopus (O. maorum) in the south. The potentially deadly blue-ringed octopus (Hapalochlaena sp.) is found right around Australia. 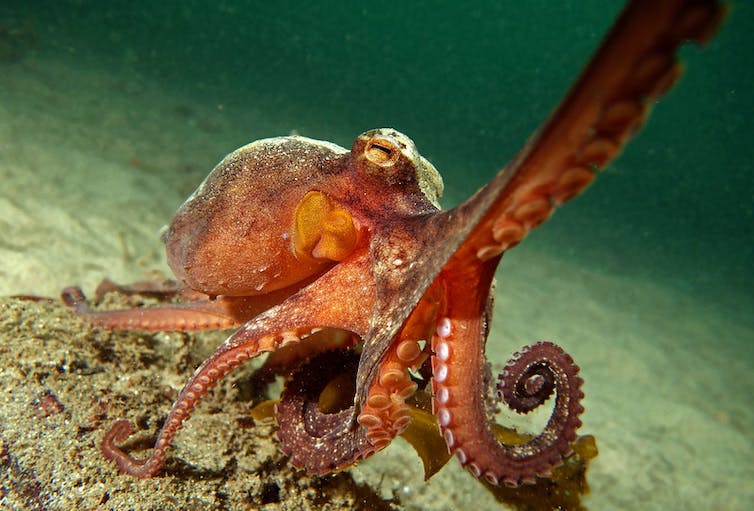 This gloomy octopus made a move for my camera as I took its photo. Photo: John Turnbull/Flickr, Author provided

Octopus forage at night, in shallow waters and to depths exceeding 500 metres. During the day they’ll return to their lair, which may be a hole, a ledge or a crack in a rock. They’ll often decorate their home with the discarded shells of their prey.

You’ve probably seen jellyfish at the beach before, too. Species such as the moon jelly (Aurelia aurita) are harmless. But others can deliver a painful sting; bluebottles (Physalia utriculus) might come to mind here, also called the Pacific man-of-war.

Bluebottles and their relatives, blue buttons (P. porpita) and by-the-wind sailors (V. velella) don’t swim. They float at the ocean’s surface and go where the winds blow, which is how they sometimes get washed onto the beach. 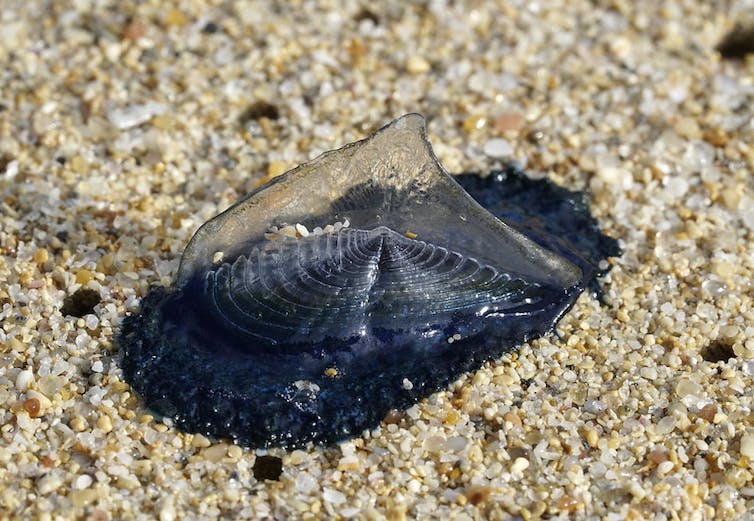 Rather than being one animal, they are made of many polyps or “zooids” living together in a floating colony. Each polyp has a specialised role such as flotation, stinging, catching prey, digestion or reproduction.

Anemones are also related to jellyfish, and come in many shapes and colours – from the bright red waratah anemone (Actinia tenebrosa) found in all states, to the multi-coloured shellgrit anemone (Oulactis muscosa) found from SA to QLD. They use their tentacles to sting and catch prey, but have no impact on humans.

Many anemones live among the rocks and rock pools in the intertidal area, although some species, such as the swimming anemone (Phlyctenactis tuberculosa), live as deep as 40m underwater. 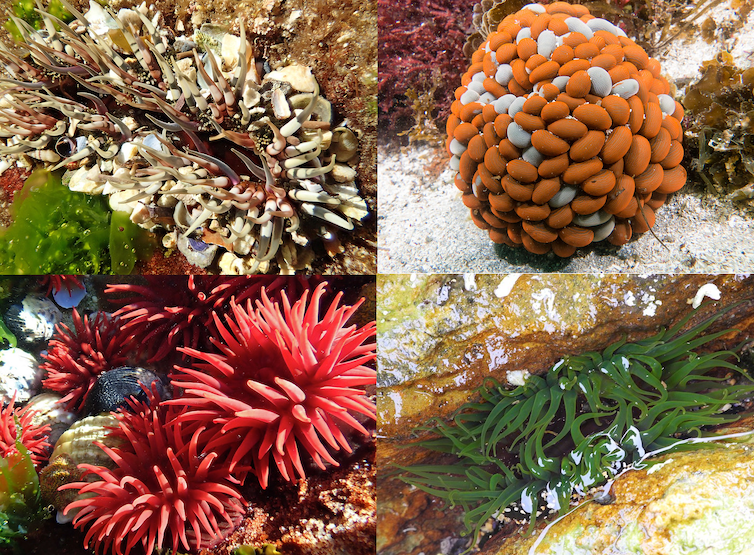 Of course there are many fish to be seen along our shores – more than we could possibly mention here! In the shallows, we particularly like to find big-eyed gobies.

Some of the most colourful fish in this zone are young damselfish. These are most diverse in tropical Australia, but still found in temperate waters. Their juvenile forms can be striped and spotted, with colours ranging from bright yellow to iridescent blue. 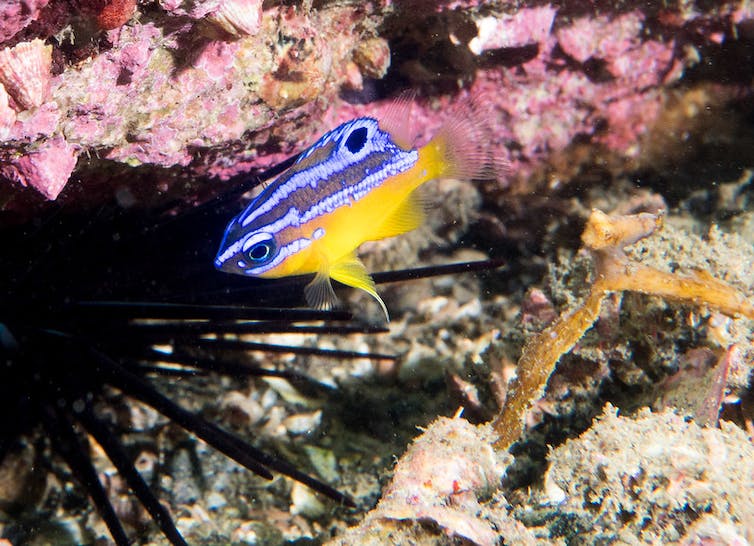 It’s best to photograph any fish you want to identify. Resources such as Reef Life Survey and Fishes of Australia can help with this.

If you upload your photos to the iNaturalist website, other users can help you ID them too. Uploading is also a big help to scientists, who then have a record of each sighting.

Finally, the diversity of marine life on our coast isn’t something we can afford to take for granted. So if you hit the beach this summer, make sure you: