Palaeontologists look to the fossil record to come up with a new strategy to save the endangered mountain pygmy-possum from becoming a climate change casualty. 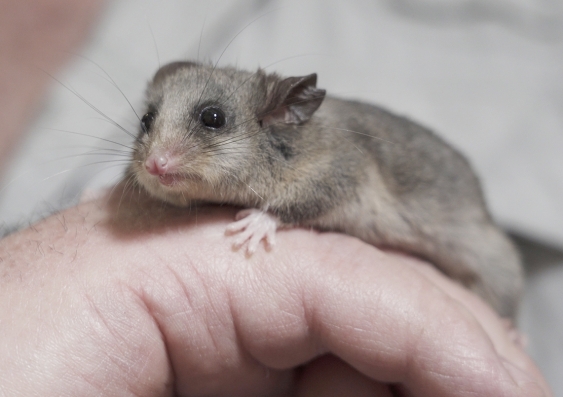 Scientists have come up with a radical plan to save the critically endangered mountain pygmy-possum: take some from their alpine habitat and introduce them to a warmer, lowland rainforest environment.

In a study published today in Royal Society’s Philosophical Transactions B, researchers from UNSW Sydney use fossil evidence going back 25 million years to argue that the mountain pygmy-possum (Burramys parvus) is a species living on the fringes of what its biological ancestors would have enjoyed as a more temperate, less extreme environment.

And with the clock ticking on Burramys’ future, the authors, including scientists from UNSW’s School of Biological, Earth and Environmental Sciences (BEES), have wasted no time in starting a breeding program in Lithgow, NSW, in a bid to get the diminutive possums acclimatised to what they believe will be more hospitable, lowland surroundings.

UNSW Professor Mike Archer, a palaeontologist who has led research into the Riversleigh fossil deposits since 1976, says the mountain pygmy-possum is one of the species most vulnerable to climate change in Australia, and faces extinction if alpine snowfalls continue to decline as climate modelling predicts.

“These possums are one of the few mammals in Australia that hibernate during the winter,” he says.

“When temperatures drop and food resources become scarce, they hibernate deep within humid rock piles. Snow cover on these rock piles provides critically important insulation from the subzero air above. The rockpiles also provide shelter in summer when temperatures outside can rise to lethal levels.”

Field research into how these possums have survived the extreme alpine conditions were long carried out by Dr Linda Broome and more recently, Dr Hayley Bates, both co-authors on the published paper. Their findings provide clarity about the possums’ essential requirements, including the need for wet-to-humid conditions in the rockpiles while they are hibernating.

“To hibernate successfully, they need temperatures to hover between 1.5 and 2.5oC,” says Dr Bates, Associate Lecturer at UNSW’s School of BEES.

“But if there isn’t enough snowfall, or snow melts early because of a warming or drying event, the outside cold air will penetrate the rocks. Anything less than 0.6oC will wake them from their hibernation and they can shiver and starve to death.

“You just need two bad winters like this and the species could collapse.”

Burramys numbers are at a critical level, with estimates of no more than 2500 living in alpine regions of NSW and Victoria. Making the situation even more dire for the miniature marsupial is that the bogong moth – the main food source it relies on when it comes out of hibernation – is also dwindling in numbers. It too is believed to be another casualty of drought and ultimately, climate change. 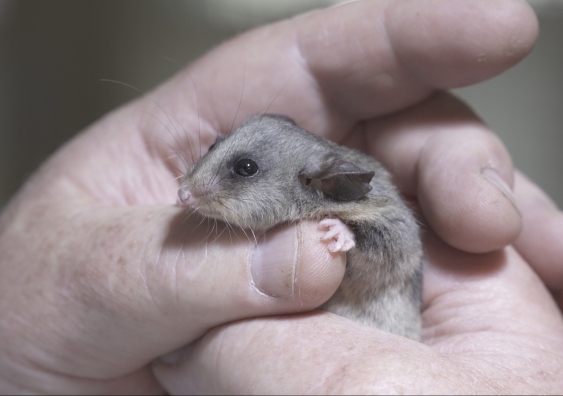 The living versions of the mountain pygmy-possums were only discovered in Australia in 1966. Picture: UNSW

It’s an all too familiar story where climate change and loss of habitat combine to inflict a double whammy of destruction upon a native species. But rather than be gloomy about the future for the Burramys, Professor Archer has been inspired by the fossil record to suggest a way to avoid extinction.

“The fossil record for all other species in the genus Burramys indicates that their current habitat is a far cry from their comfort zone for the last 25 million years,” he says. “All previous populations thrived in cool temperate lowland rainforest communities—not the alpine one.”

Professor Archer thinks that the mountain pygmy-possum, which was only first discovered as a living animal in 1966, has been marooned in a less-than-ideal alpine environment where it has been forced to use strategies such as hibernation to survive.

“What probably happened is that the modern species followed cool rainforest which invaded the alpine areas during a period of relatively warmer, lush conditions. After these conditions deteriorated with further climate change, they were stranded in an environment that was at the extreme end of their adaptability.”

Without knowledge of the fossil record, it would be reasonable to conclude that the mountain-pygmy possums required the extreme conditions of the alpine zone in NSW and Victoria, Professor Archer says. But he believes the rapidly growing fossil record demonstrates that this is not the case.

Between a rock and a hot place 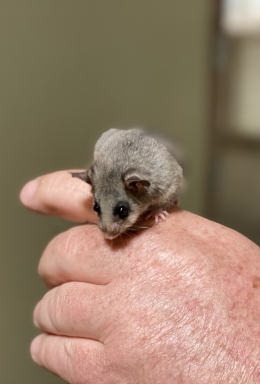 Mountain pygmy-possums are Australia's only marsupial to hibernate. Picture: UNSW

“But now the only place they survive is in the alpine zone, and they can’t get out of there, because they need the rock piles in the highlands to survive extremes of temperature,” Professor Archer says.

“Migration downslope might have been possible when forested slopes provided vast corridors to lowland forests, but these have now been cleared for agricultural land.”

In response, Professor Archer and his colleagues from UNSW, University of Sydney, University of New England and various local and international environmental organisations have hatched a plan to save the mountain pygmy-possum by establishing a new colony of these animals in lowland areas of dense forest. There are now two breeding pairs in Secret Creek Sanctuary at Lithgow which are being maintained in temperatures that would have suited the ancestral species of Burramys.

“We’ve raised $150,000 so far to construct a breeding facility. We anticipate using closed circuit TV to monitor these possums in their individual enclosures,” Professor Archer says.

Dr Bates adds that the sanctuary at Lithgow will also provide more opportunity to study the animal, as there is “still so much more to learn about them than we currently understand”.

“This will also provide an opportunity to introduce the Secret Creek colony to potential food species they will encounter when they are eventually released and monitored in suitable protected areas of lowland forest,” she says. 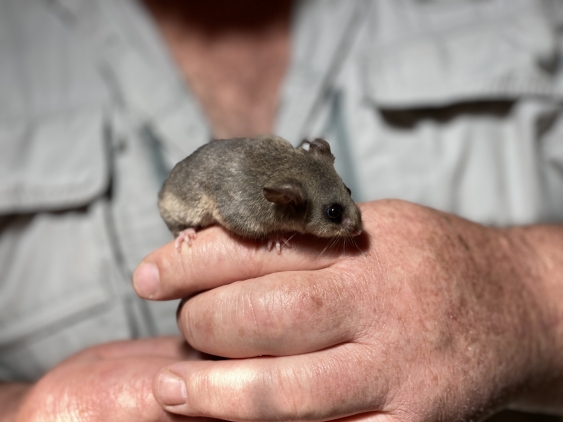 When the mountain pygmy-possum is in a warmer environment, it stops hibernating. Picture: UNSW

The group is aiming to start with a colony of about 25 individuals. If the project is a success and it can be shown that the mountain pygmy-possum can establish a foothold in a more temperate environment, Professor Archer anticipates that other threatened animals could be rescued in this same way.

“An animal facing a very similar gloomy outlook in the alpine zone is the Corroboree frog, which is critically endangered.

“We don’t yet have the same kind of fossil record of it in places like Riversleigh but because it occurs today in the same alpine habitats as the mountain pygmy-possum, it is at least probable that these frogs followed a similar prehistoric path up into the alpine zone. Given that climate-change-driven factors are likely to lead to its extinction, we are suggesting that before it disappears, it would be sensible to at least consider the option of translocating a population down into the same original lowland wet forest environments that have kept species of Burramys comfortable for the last 25 million years.

“Another critically endangered species in Australia that does have a long fossil record is the swamp tortoise (Pseudemydura umbrina) from Western Australia. It’s critically endangered in part because the swamps it needs are drying up. But we found in a 15-million-year-old deposit at Riversleigh a turtle in the same genus and quite possibly the same species, in what would have been a pool in cool, temperate lowland rainforest.”

Key to the future is in the past 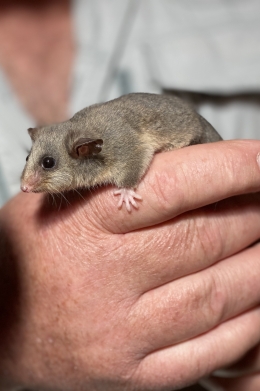 If this translocation project is successful, other animals threatened by climate change may be rescued in the same way. Picture: UNSW

Professor Archer and colleagues say that more attention needs to be paid to fossil evidence when developing conservation strategies.

“While it’s been traditional to assume that ecologists have the best understanding about the needs of endangered creatures to survive, in reality many animals and plants have a wider adaptive resilience than their current situations might suggest,” he says.

“This is where the fossil record comes in. It’s not unusual for endangered species to be occupying the ‘extreme’ edges of a once much wider habitat. Giant pandas, for example, were once widespread over lowland areas but, because of agriculture, have long since been confined to mountainous areas.

“Understanding former distributions, even way back in time, can provide new insights into translocation strategies that might work for species otherwise threatened in the extreme edges of their once much wider distribution.

The researchers are hoping to raise more funding for the project and expect to have a proper breeding facility built by early next year.