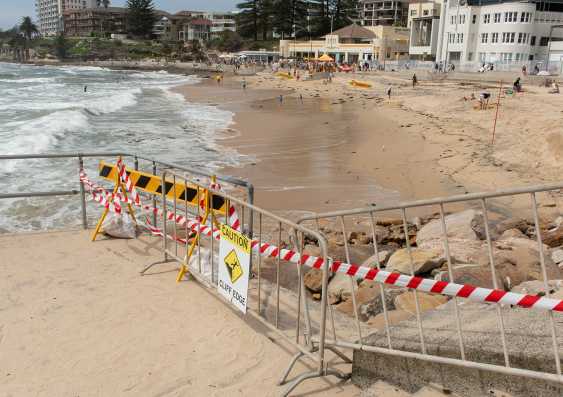 CoastSnap can help UNSW Engineers understand the impact of extreme storms on our coastline. Image: Shutterstock

A severe storm in 2016 that saw a swimming pool ripped away from a property overlooking Collaroy beach, on Sydney's northern beaches, was a stark reminder of the damaging effects extreme weather events can have.

Now, a team from the UNSW Water Research Laboratory are using crowd-sourced images of the coastline to study the impact of such storms to improve coastal management practices.

Dr Mitchell Harley, who leads the citizen science project CoastSnap, says the program has provided insights into how beaches respond to changing weather and wave conditions, and extreme storms.

CoastSnap is a network of simple camera mounts at beaches that invite the public to take a photo and upload it via the app or through to social media, using a specific hashtag.

Since the program kicked off in 2017 in partnership with the NSW Department of Planning, Industry and Environment, CoastSnap has grown to over 100 locations across 16 countries globally. In Australia, there are 33 stations in almost every state with plans to expand further in sites located in national parks.

“Our sites are in really unique locations. One of them is at the iconic lighthouse at Byron Bay, which is very popular on Instagram,” says Dr Harley.

“And we have others in more peculiar locations such as our site in Suriname that’s located at the northern tip of South America, looking at the mud coastline.

“When the program first started, we were asking people to email their photos in. Now, you do everything in the phone app, and you can even monitor your own local beach by placing your phone on a piece of fixed infrastructure like a fence post or handrail without needing to be close to one of our official camera mounts. I think we’ve come a long way.” 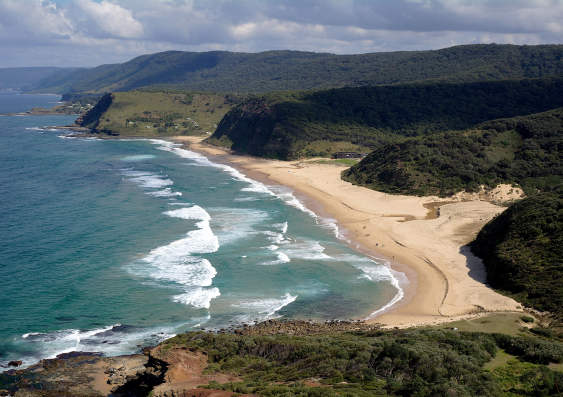 CoastSnap stations have been installed in national park sites, such as Garie Beach in the Royal National Park, so that anyone doing the iconic coastal walk can take a snap for science. Image: Shutterstock

Monitoring the impact of extreme storms

Dr Harley, a coastal erosion expert, is focused on understanding how the coast is changing due to extreme storm events. Recent data from CoastSnap has shown that some beaches can move by almost 100 metres back and forth over a year.

While it’s easy to get data after a storm has passed, Dr Harley says the biggest challenge is analysing exactly what the coastline looked like before an extreme event.

“With our technology and the help of our active community, we can actually measure the exact changes caused by these extreme storm events from the CoastSnap images,” he says.

“You may remember, we had houses teetering on the edge in Wamberal in the Central Coast and at one of our sites in Byron Bay, one of the beaches disappeared in December last year.

“We used CoastSnap effectively there to get the before and after snaps to help us understand why some beaches erode more than others.”

Dr Harley also hopes to use the data collection from the app to improve the planning for coastal communities.

“While many homes built along the coast of Australia enjoy spectacular views, they are exposed to the effects of coastal erosion – mainly because they’re built so close to dynamic coastal zones,” he says.

“We need to ensure our coastal communities are planned properly, and effectively, to avoid repeating the mistakes of the past. This is particularly important considering climate change and the likely huge impacts on the coast.”

The team are also working closely with the Bureau of Meteorology on developing coastal erosion forecasting to allow the public to see which beaches could have a high risk of extreme erosion, seven days in advance.

With more rain predicted to persist into April, Dr Harley says the impact of extreme weather conditions, such as La Niña, has had a direct impact on the coastline.

“Our data has shown that the coastline is breathing in and out over these long periods related to El Nino and La Niña,” he says.

“Over the past eight months, we’ve seen increased erosion along our coast and that’s been directly associated with the La Niña period.

“Now, even though that’s starting to ease, that’s not to say that the risk of further erosion goes away too as we enter the winter storm season.”

The team are particularly interested in the impact of storms that shift its position and intensity. Using their current technology, they measure from the snaps the exact changes caused when these storms change.

“Particularly last year, we had a whole series of extreme storm events – some of the most intense we've seen over the last 30 to 40 years.

“The general consensus is that we’re going to have less storms, but they will be more intense.”

Within the next five years, Dr Harley and team aim to expand CoastSnap’s technological capabilities to implement augmented reality in the app. The concept would allow users to observe visual coastal changes at any location, all from the smartphone app.

He also wants to build in more education elements to the program and expand the program to study other coastline threats.

“We’re working to see how we can get CoastSnap involved in the curriculum in secondary schools,” says Dr Harley.

“I think there’s opportunities to get Surf Lifesaving involved and to see how we can apply our technology to learn more about rip currents and all different types of coastline hazards.

“But beyond that, we’d also like see how we can better connect with Indigenous communities and pass on their knowledge of these sites.”